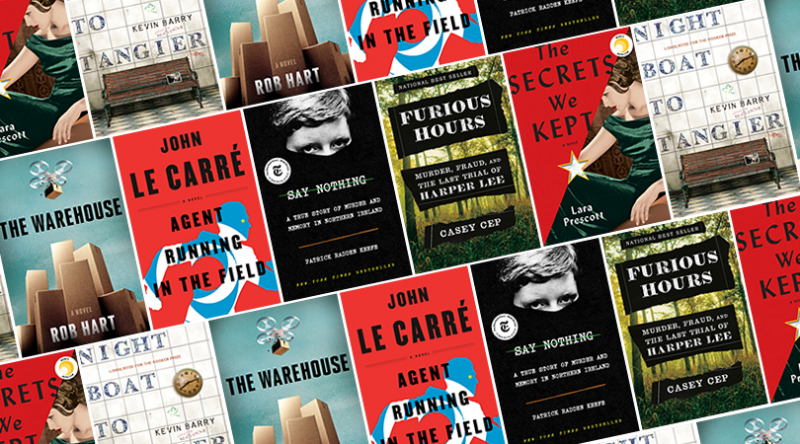 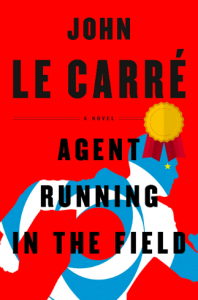 1. Agent Running in the Field by John Le Carré

“Le Carré [is] doubling down on his renowned and suspenseful opacity with an urgent first-person narrative that ranges from a Battersea health club to a hunting lodge in Karlovy Vary … neither a hissy fit nor a high-noon shootout, but an autumnal threnody that reconciles rage to storytelling … this new book demands the tribute of a rereading as much as a reading … Publishing such a thriller at the age of 88, a feat of imaginative stamina that surpasses the tenacity of his idol Graham Greene, le Carré confirms his place at the head of his profession. Not many writers half his age could so successfully put Goethe and Sting into the same sentence. This may not be the finest novel he has ever written—Tinker, Tailor and the other great novels of the 1970s remain in a league of their own—but it’s still touched with his magic. His readers will know from his first line that they are in the presence of a great enchanter … Le Carré delivers a tale for our times, replete with the classic seasoning of betrayal, secret state shenanigans and sad-eyed human frailty, all baked into an oven-hot contemporary thriller that’s partly inspired by the machinations of 21st-century Ukraine, today more than ever the fatal crossroads of great power politics … right on the money, in psychology as much as politics, a demonstration of the British spy thriller at its unputdownable best … Le Carré has not lost his master storyteller’s command of momentum.”

“Casey Cep has picked up where Lee left off: She’s written the true-crime story that Harper Lee never figured out how to write … It’s one measure of just how rich Casey Cep’s material is, and how artfully she handles it, that I have given away only about a tenth of the interest and delight contained within just the first third or so of her book. She reminded me all over again how much of good storytelling is leading the reader to want to know the things you are about to tell him, while still leaving him to feel that his interest was all his idea. By the time I got to the section on Harper Lee, I wanted to know more about her than I’ve ever thought I wanted to know … Furious Hours builds and builds until it collides with the writer who saw the power of Maxwell’s story, but for some reason was unable to harness it. It lays bare the inner life of a woman who had a world-class gift for hiding … it’s in her descriptions of another writer’s failure to write, that [Cep’s] book makes a magical little leap, and it goes from being a superbly written true-crime story to the sort of story that even Lee would have been proud to write.”

3. Say Nothing: A True Story of Murder and Mystery in Northern Ireland by Patrick Radden Keefe

“Patrick Radden Keefe’s great achievement is to tell Northern Ireland’s 50 years of conflict through personal stories—a gripping and profoundly human explanation for a past that still denies and defines the future … Only an outsider could have written a book this good. Irish or British writers are tainted by provenance … [the book] handles the minefield scrupulously, dodges loaded vocabulary and allows people to condemn themselves by their actions … Humanity shines through in the small anecdotes … I can’t praise this book enough: it’s erudite, accessible, compelling, enlightening. I thought I was bored by Northern Ireland’s past until I read it.”

“This book has a lot of drastic scene changes, is packed with minor characters and is in no hurry to get where it’s going. But somehow Atkinson never seems to be treading water … There is no stray anything in Big Sky. That’s one big reason Atkinson’s devotees love her. No detail is too small to come home to roost … it’s worth rereading the beginning once you’ve finished this novel just to see how well the author has manipulated you. Atkinson is also adept at weaving the mundane details of her characters’ lives (or perhaps her own) into the Brodie books as a way of humanizing them, despite the stark malevolence that lurks beneath this workaday surface … Atkinson opens Big Sky with one perfect page. It’s a bit of a red herring, but it couldn’t do a better job of throwing the reader off base and commanding instant interest … It’s a prime example of how Atkinson tells a great story, toys with expectations, deceives by omission, blows smoke and also writes like she’s your favorite friend. Thank goodness the long Jackson Brodie hiatus is over.”

5. The Border by Don Winslow

“The Border is a furious, impassioned novel that directs its anger at a wide assortment of targets. Some of the angriest (and probably most controversial) moments come through Winslow’s scathing account of the 2016 presidential election … The resulting portrait of greed and influence peddling at the highest levels of government lends an extra layer of outrage to an already white-hot narrative … The Border guides us through a savage, wholly believable world. The result is a powerful—and painful—journey through a contemporary version of hell. Rarely has hell been so compelling.”

6. The Chain by Adrian McKinty

“[McKinty] has proven a dozen times over that he knows how to write people enduring long-term trauma of terrorism, occupation, and kidnapping without cheapening the reality of it. And he brings that experience and talent fully to bear upon the reader with The Chain … McKinty doesn’t use any tricks of the trade to make this story more relentless than it needs to be…He doesn’t eschew the poetics and embrace of the classical that make the Sean Duffy novels so enjoyable, but he gives the scenes the drive they are due … harrowing and memorable … So many stories treat trauma cheaply, like a scrape where whiskey serves as Bactine, but McKinty does not … gives the reader just enough remove to be entertained and chilled, instead of traumatized … gives us villains that are all too real … a thriller I loved.”

7. The Warehouse by Rob Hart

“Some of the best speculative fiction comes when a writer is able to extrapolate forward in a manner that is both engaging and plausible … That’s what Rob Hart has done with his new novel … The Warehouse brings a keen satiric edge to its rendition of a corporate dystopia … That’s the real power in something like The Warehouse. It illustrates that greed knows no boundaries, and that even those with the best of intentions can eventually wind up making the most reprehensible of choices so long as they can talk themselves into believing that it is for some nebulous greater good. That’s the perspective we get from Gibson Wells, and it is vital to the novel’s success. The Warehouse is funny and bleak, putting forth an exaggerated but nevertheless still plausible take on the direction our world seems to be traveling. It is a sharp takedown of 21st century corporate culture that serves as something of a warning—our seemingly small individual choices can eventually have much larger consequences than we ever could have known.”

“…a darkly incantatory tragicomedy of love and betrayal, haunted lineage and squandered chances … Barry rightly landed on the Booker Prize longlist with this, his beautifully paced, emotionally wise third novel. Spare in its prose, capacious in its understanding, it’s as eerily attuned as his last one…to the ancient spirits that flit through the Irish landscape, and as festering with unsavory personages as his debut … In his lilting voice, with language whose textures tap all the senses (language that can be, in its casual, colorful profanity, difficult to quote here), Barry will lull you right under his spell and into a wary sympathy for the pain of these men with their battered, hopeful hearts. You will feel this even as you recognize that they’d be perfectly at home in, say, the world of Martin McDonagh’s movie In Bruges. Explosive, uncalled-for violence doesn’t ruffle them a whit.”

=8. The Secrets We Kept by Lara Prescott

“Prescott’s hard-boiled depiction of D.C.’s intelligence community—its social and sexual hierarchies—gives readers a gritty insider-tour of a Mad Men-redolent world where women had to work doubly hard to be taken as serious players, effectively doing everything backward and in heels … Such is the thoroughness of Prescott’s research and the crispness of her delivery that the novel reads almost like a documentary, itemizing cultural milestones and emblems alongside women’s courageous contributions to postwar heroism. Her details vibrate with authority … Sally, Irina and Olga are distinct, dimensional and complex voices; their arcs compelling and sometimes surprising … Prescott sustains a breathless tension … Without a speck of sentiment, Prescott has built an impassioned testament to them. Reading Secrets affords a pleasurable, inspiring way to absorb unsung history.”

10. Lady in the Lake by Laura Lippman

“What makes this book special, even extraordinary, is that the crossword puzzle aspect is secondary. Lippman, who is the closest writer America has to Ruth Rendell, is after bigger game … Lippman’s point — which takes this book far beyond the works of Agatha Christie and Rex Stout, although Lippman does not fail to honor her genre roots — is that Maddie also pays, and in blood … Lippman walks a fine line, balancing a cracking good mystery with the story of a not always admirable woman working to stand on her own. Lippman never loses sight of Maddie’s options and her obstacles … she never loses touch with the twin mysteries at the center of her story … Lippman answers all outstanding questions with a totally cool double twist that your reviewer — a veteran reader of mysteries — never saw coming.”