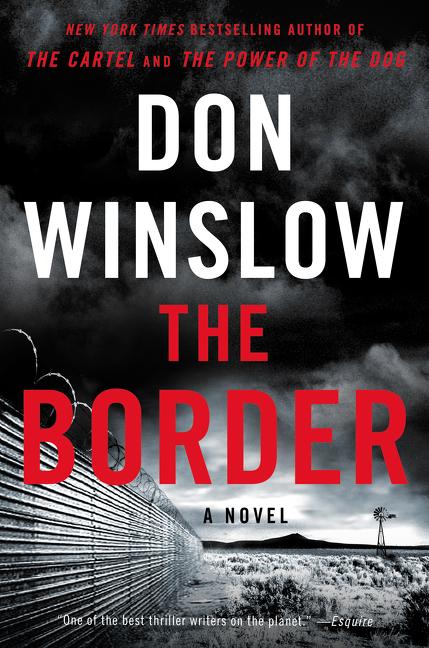 What The Reviewers Say
Rave Jim Ruland,
The Los Angeles Review of Books
... Nico’s journey feels every bit as harrowing as Cormac McCarthy’s The Road ... Nico’s journey might seem like an odd interlude for a hyper-violent saga about Mexican drug cartels. This isn’t a dystopian flourish, but a cold dose of reality ... Nico’s journey illustrates in heart-breaking detail why so many people are fleeing Guatemala, El Salvador, and Honduras ... Winslow doesn’t introduce a character to make a point. Rather, he masterfully weaves them into his web of intrigue. It’s an audacious and unusual undertaking ... Winslow writes about the bloodshed in Mexico with a passion and purpose that calls to mind The Part About the Crimes section of Roberto Bolaño’s 2666 ... At the sentence level, Winslow’s writing in The Border is comparable to James Ellroy’s — not the dark dream of the L.A. Quartet, but the hard-bitten prose of the Underworld USA trilogy that followed ... Few fiction writers know more about the futility of the War on Drugs and its impact on the United States and Mexico than Don Winslow. This research comes in handy when writing sadistic scenes of narco torture and retaliation, and The Border has an abundance of them. But there’s a grander purpose at work here. At a time when nationalism is on the rise, The Border is nothing less than Winslow’s endeavor to pull down the barriers in his readers’ imaginations.
Read Full Review >>
Rave Janet Maslin,
The New York Times
Of all the blows delivered by Don Winslow’s Cartel trilogy, none may be as devastating as the timing of The Border, its stunner of a conclusion ... This is a book for dark, rudderless times, an immersion into fear and chaos. It conjures more lawlessness, dishonesty, conniving, brutality and power mania than both of the earlier books put together. Because of that chaos, it might have benefited from an indexed cast of characters. But Winslow can’t provide one. For one thing, it would be a spoiler. You just have to watch these miscreants as they drop ... Winslow describes sting operations with immersive, heart-grabbing intensity. You don’t read these books; you live in them ... Last and never least with Winslow: the matter of languages. He is fluent in many of them, and The Border once again shows off those talents.
Read Full Review >>
Rave Bill Sheehan,
The Washington Post
The Border is a furious, impassioned novel that directs its anger at a wide assortment of targets. Some of the angriest (and probably most controversial) moments come through Winslow’s scathing account of the 2016 presidential election ... The resulting portrait of greed and influence peddling at the highest levels of government lends an extra layer of outrage to an already white-hot narrative ... The Border guides us through a savage, wholly believable world. The result is a powerful — and painful — journey through a contemporary version of hell. Rarely has hell been so compelling.
Read Full Review >>
See All Reviews >>
SIMILAR BOOKS
Fiction

The Every
Dave Eggers
Mixed
What did you think of The Border?
© LitHub | Privacy