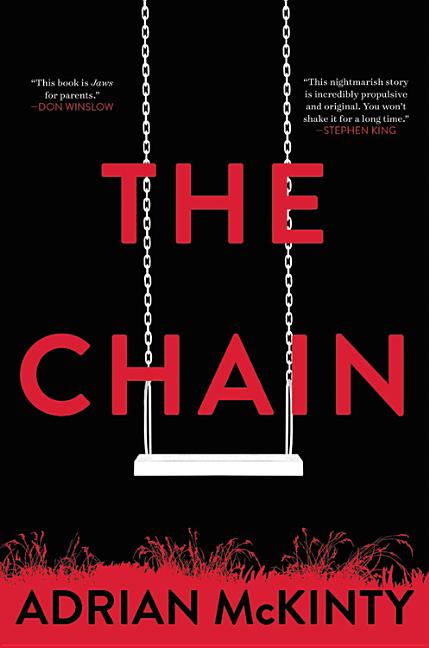 You know you’re having a bad day when you get a phone call telling you your daughter has been kidnapped, and, to get her back, you must not only pay $25,000 but also kidnap somebody else. It’s called the Chain, and it’s a Ponzi scheme from hell: if you don’t keep the chain going by becoming a kidnapper, and if the next parents don’t kidnap a child in turn, your child dies.

What The Reviewers Say
Positive Janet Maslin,
The New York Times Book Review
... isn’t as silly or one-note as it initially sounds. And because McKinty hangs on to his wit and literacy even under duress ... Where McKinty succeeds, in a book that feels heavily worked over to ensure no tangents detract from main events, is in making sure the premise isn’t the main event. Which could easily have happened with a premise like this ... Some scoffing is in order when the disguised, disembodied voice of The Chain recommends antiquated gimmicks like burner phones, the dark web and Bitcoin as the basics of this operation. But the long arm of the crime novelist Don Winslow, the 'Cartel' wizard who turned his own career into the kind McKinty now hopes to achieve, is also visible ... To McKinty’s great credit, he can make readers wonder at any point whether the ground may fall beneath their feet and how much evil they might be pushed toward ... Beneath its surface of high-speed thrills, The Chain is clearly the work of the philosophical thinker McKinty has always been.
Read Full Review >>
Rave Bill Ott,
Booklist
Best known for his outstanding Sean Duffy series, set during the Troubles in Northern Ireland, McKinty has also written several gripping stand-alones, of which this one is the best yet; in fact, it may well be the biggest thriller of the summer ... a high-concept thriller that draws creatively on familiar tropes ... The suspense here is intense, as one would expect, given the premise, but the true brilliance in this unrelenting novel comes from the way McKinty makes Rachel confront her own capacity for evil and deal with its reverberations, not only on herself and the child she kidnaps, but also on her own child, Kylie. A pitch-perfect psychological thriller.
Read Full Review >>
Rave Thomas Pluck,
Criminal Element
[McKinty] has proven a dozen times over that he knows how to write people enduring long-term trauma of terrorism, occupation, and kidnapping without cheapening the reality of it. And he brings that experience and talent fully to bear upon the reader with The Chain ... McKinty doesn’t use any tricks of the trade to make this story more relentless than it needs to be...He doesn’t eschew the poetics and embrace of the classical that make the Sean Duffy novels so enjoyable, but he gives the scenes the drive they are due ... harrowing and memorable ... So many stories treat trauma cheaply, like a scrape where whiskey serves as Bactine, but McKinty does not ... gives the reader just enough remove to be entertained and chilled, instead of traumatized ... gives us villains that are all too real ... a thriller I loved.
Read Full Review >>
See All Reviews >>
SIMILAR BOOKS
Fiction

The Maid
Nita Prose
Positive
What did you think of The Chain?
© LitHub | Privacy