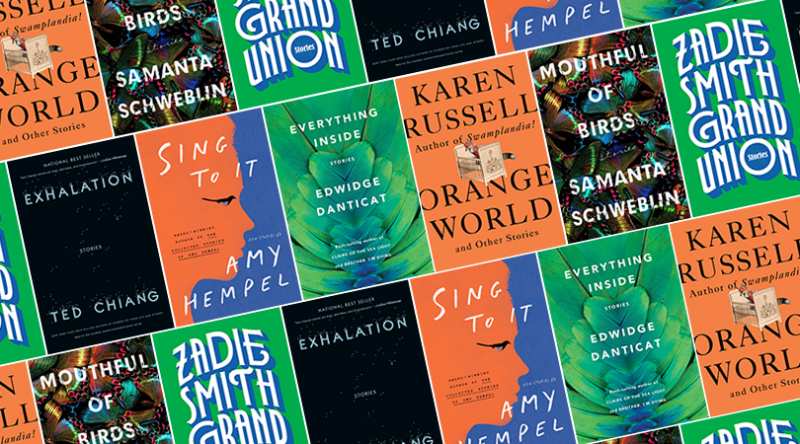 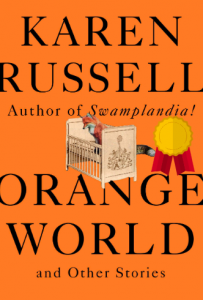 “Something is, however, not right in each of these worlds. Usually two things—one private, the other bigger, in one way or another environmental. Russell’s gift is how she braids these together, letting the private un-right-ness bob to the surface like a beacon … With each story Russell pitches a pup tent in each new universe so rapidly you almost don’t feel its assumptions getting to their dark work … These tales are not short, but they feel even roomier owing to the way Russell cracks open narrative space with humor … Russell is also the greatest user of verbs in American fiction since Annie Dillard. Dogs ‘dervish’ around kitchens. A man is ‘turtled’ into his hoody in a rain storm … The precision of Russell’s writing makes it that much easier to accept how she is tilting reality.”

“… eclectic … Inevitably, some are stronger than others … Pieces that garnered a lot of attention when they first appeared elsewhere hold up gratifyingly well, though the experimental efforts that work best tend to be the ones that wear their humanity on their sleeve … There’s some cognitive whiplash, too, in toggling so quickly between so many styles. But taken all together, the book does feel like a kind of grand union: the lucky synthesis of everything swirling inside Smith’s big, beautiful brain.”

4. Mouthful of Birds by Samanta Schweblin, trans. by Megan McDowell

“These 20 stories display the full range of Schweblin’s tone and effects. These are funny stories and terribly sad ones; there are some that feel gleaned from outtakes to ‘Rosencrantz and Guildenstern are Dead,’ while others would make Stephen King tip his hat in appreciation … This is an extraordinarily well-ordered collection … Here at last is why Schweblin’s tales are so piercing and make such a lasting mark. Throughout the book people question their actions. They wonder about whether what they’re doing is right. If the order in which they tell their story is accurate. It’s hard to think of a story collection this strange that feels so much like life.”

5. Sing to It by Amy Hempel

“You can’t rush great fiction, and that’s exactly what Hempel delivers in her new collection, Sing to It. The fifteen stories in Hempel’s new book showcase the author’s immense talents, and prove that she’s one of the most vital authors of short fiction writing today … There’s not a story in Sing to It that’s less than brilliant, and the collection itself is even greater than the sum of its parts. Hempel occasionally draws comparisons to authors like Mary Robison and Joy Williams, but she writes like nobody else—she’s an irreplaceable literary treasure who has mastered the art of the short story more skillfully than just about any other writer out there. Sing to It is a quiet masterpiece by a true American original.”

6. Everything Inside by Edwidge Danticat

“Everything Inside is a haunting, profound collection by Edwidge Danticat—an answered prayer for those who have long treasured her essential contributions to the Caribbean literary canon … With little introduction, we drop into people’s lives midcrisis, just as they’re confronting choices from which there’s no turning back; these characters feel not like strangers, but close friends … How does an artist write so deftly from the outside about people’s interior lives? Everything Inside is an answer to that question: This remarkable writer shows us how.”

“..the written conversation is savagely humorous, integrating satire, sarcasm, and shades of darker universal elements at a dizzying rate. Even better, as a reader, you’re so immersed in Keretworld, that the twist in the tale is particularly more outrageous and unexpected than usual. Fantastical, heart-breaking, laughter-inducing, fabulist, and sometimes just downright wacky, Keret’s writing is palpably imbued with a distinct element of intimacy, as though the author has just invited you into his local café or pub to chat about the state of the world—of our world—over your drink of choice.”

8. Song for the Unraveling of the World by Brian Evenson

“Song for the Unraveling of the World is Evenson’s latest collection, and it’s a perfect introduction to Evenson’s work for those who are looking to experience it for the first time. For longtime Evenson readers, there are also plenty of delights here, ranging in tone from the philosophical to the visceral … All told, Song for the Unraveling of the World is a succinct exploration of Brian Evenson’s strengths as a writer: some of the concepts and images here aren’t likely to leave my head any time soon, and the evenness of his tone and precision of his language only accentuates these stories’ moods. There’s also a sense of Evenson pushing out and trying new things, keeping things interesting for those who have been reading Evenson for a while now. Evenson knows how to meticulously construct a story, but he also knows the primal terror that can come from a darkened space or something just out of view. In these stories, he demonstrates just how effective those traits can be combined.”

9. Instructions for a Funeral by David Means

“Means, like Proust or Woolf or Munro, is a time artist … What I had first taken for dislike was in truth a sort of altitude sickness. Once acclimatized, I recognized that I was having an encounter with radical originality, and that understanding this work on its own complicated, rewarding terms would mean rethinking what a story could be … Means extends the profound empathy of his attention to those who need it most, even if they deserve it least, which must be why he writes so often about adulterers, criminals and teenagers … Like Flannery O’Connor, Means senses that beneath every act of violence there pulses a vein of grace … his commitment to exploring its implications is the rock on which his writerly project is built … Means’s recursive, iterative approach links individual stories to one another within a given book and connects each book to the rest … this is Means’s most self-reflective and self-reflexive book to date … both sweeping and narrow, panoramic and fragmentary, possessed … What pleasure it gives us to gather them up, and to dream of a world made whole.”

“Extraordinary … Power has an intelligent and confidently idiosyncratic approach to the form. His tone is generally affectless, but modulated with dry humour, and his images are sharply drawn and often haunting. There is an obsessive quality to the best of these stories that makes them feel pregnant with inscrutable meaning. Many of them, even those that deal exclusively with adult characters, have the bittersweet mood, the uncanny logic and the peculiar sheen of childhood memory … when I reached the end, I was close to tears and felt compelled to reread the first two stories in the sequence, the better to appreciate how Eva’s life came so dramatically off the rails. It is testament to the depth and distinctiveness of Power’s characters that it seems so important to try to understand them, even as they fail to understand themselves.”