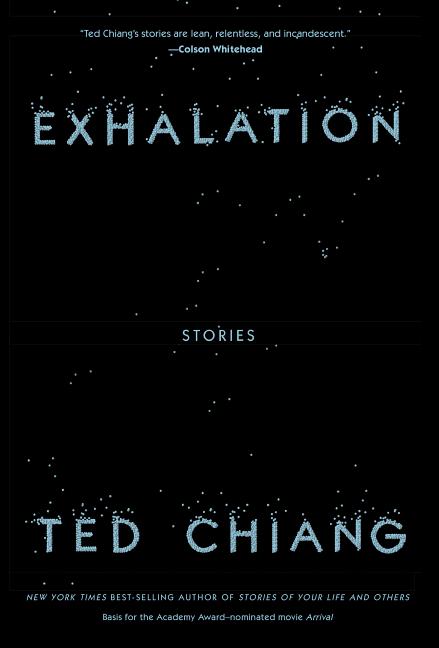 A portal through time forces a fabric seller in ancient Baghdad to grapple with past mistakes and second chances, an alien scientist makes a shocking discovery with ramifications that are literally universal, and more in Ted Chiang's collection of short stories.

What is this?
Rave
Based on 30 reviews

What The Reviewers Say
Rave Adam Morgan,
The A.V. Club
A handful of living science fiction writers have attained godlike status—N.K. Jemisin, Cixin Liu, and Ann Leckie, to name a few. But Ted Chiang is the only one who’s done it without writing a novel ... oh, his stories. They’re a religious experience ... In Exhalation, which could be subtitled 'Black Mirror For Optimists,' every story seems crafted with one objective in mind—pure awe ... The three longer stories in Exhalation are Chiang’s finest work to date ... Savor all nine of these stories. Read them one sitting at a time, somewhere still and quiet, and let them sink in.
Read Full Review >>
Rave Sherryl Vint,
Los Angeles Review of Books
Chiang’s ongoing interest in questions of free will and determinism is the motif that emerges most strongly across this collection ... [His] stories are clearly philosophical thought experiments, they are also what we might call parables of the human condition, albeit without the didacticism this term might imply. Chiang’s stories are about choice and regret, about taking responsibility for one’s actions, about love, and about forgiveness, of oneself as much as of others ... brief notes at the end of the volume in which Chiang explains the occasions or ideas that motivated each story. His reflections significantly enhance the collection, providing, as they do, a brief insight into Chiang’s mind at work ... a ready-to-hand comparison that encapsulates his method is to think of his work as a prose version of ideas similar to those explored by the highly popular Black Mirror television series. Yet this comparison also does an injustice to Chiang’s work in that it might incline us to overlook the magnificent subtlety and nuance with which Chiang proceeds, in contrast to the often heavy-handed polemic of the series. This collection is a stunning achievement in speculative fiction, from an author whose star will only continue to rise.
Read Full Review >>
Positive Joyce Carol Oates,
The New Yorker
Contemporary issues relating to bioethics, virtual reality, free will and determinism, time travel, and the uses of robotic forms of A.I. are addressed in plain, forthright prose. If Chiang’s stories can strike us as riddles, concerned with asking rather than with answering difficult questions, there is little ambiguity about his language ... The new collection starts with 'The Merchant and the Alchemist’s Gate,' a quirkily original exploration of time travel set in a mythical, ancient Baghdad ... An ingenious turn-of-the-twentieth-century automaton is the subject of 'Dacey’s Patent Automatic Nanny' ... It is both a surprise and a relief to encounter fiction that explores counterfactual worlds like these with something of the ardor and earnestness of much young-adult fiction, asking anew philosophical questions that have been posed repeatedly through millennia to no avail ... Chiang spends a good deal of time describing the science behind the device, with an almost Rube Goldbergian delight in elucidating the improbable ... The stories in Exhalation are mostly not so magically inventive as those in Chiang’s first collection, but each is still likely to linger in the memory the way riddles may linger.
Read Full Review >>
See All Reviews >>
SIMILAR BOOKS
Fiction