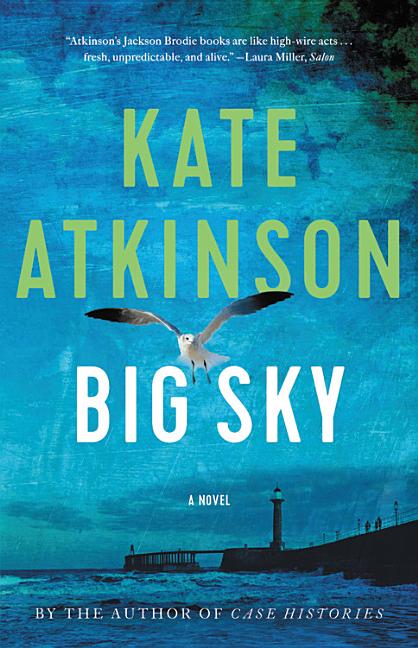 The fifth novel in Atkinson's Detective Jackson Brodie series finds Brodie relocated to a quiet seaside village, in the occasional company of his recalcitrant teenage son and an aging Labrador, both at the discretion of his ex-partner Julia. It's picturesque, but there's something darker lurking behind the scenes.

What The Reviewers Say
Rave Janet Maslin,
The New York Times
This book has a lot of drastic scene changes, is packed with minor characters and is in no hurry to get where it’s going. But somehow Atkinson never seems to be treading water ... There is no stray anything in Big Sky. That’s one big reason Atkinson’s devotees love her. No detail is too small to come home to roost ... it’s worth rereading the beginning once you’ve finished this novel just to see how well the author has manipulated you. Atkinson is also adept at weaving the mundane details of her characters’ lives (or perhaps her own) into the Brodie books as a way of humanizing them, despite the stark malevolence that lurks beneath this workaday surface ... Atkinson opens Big Sky with one perfect page. It’s a bit of a red herring, but it couldn’t do a better job of throwing the reader off base and commanding instant interest ... It’s a prime example of how Atkinson tells a great story, toys with expectations, deceives by omission, blows smoke and also writes like she’s your favorite friend. Thank goodness the long Jackson Brodie hiatus is over.
Read Full Review >>
Rave Carolyn Kellogg,
The Washington Post
There will, eventually, be blood. But the richness of this novel comes in spending time with the kaleidoscope of characters who spin together in the whirlwind ending ... Atkinson is so skilled at getting inside people’s heads that when she introduces a new character, it’s almost impossible to not feel at least a little sympathy for the person. As terrible as I feel typing this, it even holds true for one of the human traffickers ... Jackson appears to be aging basically in real time ... He’s still the empathetic, flawed, country-music-listening detective we first fell for.
Read Full Review >>
Rave Ellen Akins,
The Star Tribune
Kate Atkinson’s Big Sky, the fifth in her series of literary detective novels featuring ex-soldier, ex-policeman and private detective Jackson Brodie, is, like the others, wonderfully written, irresistibly suspenseful and offhandedly funny, its wildly eventful plot so chock full of coincidence and convenience that, looked at from arm’s length, it seems delightfully silly—yet so attuned to human foibles that it feels utterly genuine.
Read Full Review >>
See All Reviews >>
SIMILAR BOOKS
Fiction

The Maid
Nita Prose
Positive
What did you think of Big Sky?
© LitHub | Privacy