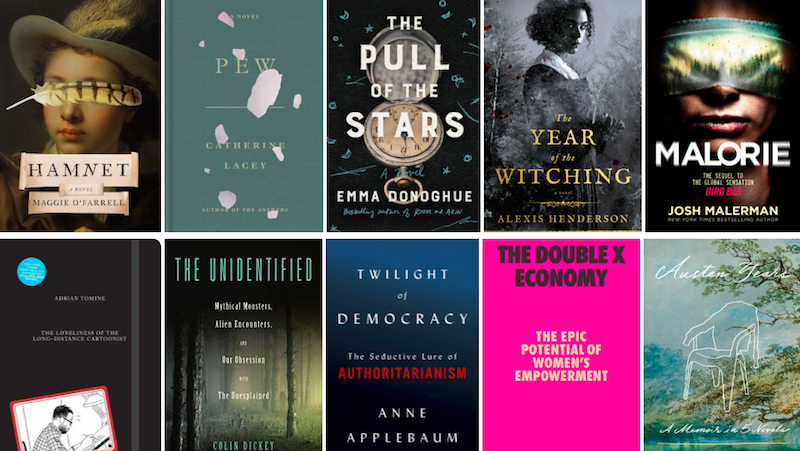 Maggie O’Farrell’s Hamnet, Catherine Lacey’s Pew, Emma Donoghue’s The Pull of the Stars, and Adrian Tomine’s The Loneliness of the Long-Distance Cartoonist all feature among the Best Reviewed Books of the Week. 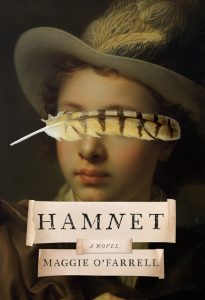 “Such an undertaking is an enormous challenge, but O’Farrell is passionately steeped in the period … The utter fluency with which O’Farrell glides across years and decades, never lingering in one timeframe for long yet never confusing the reader, has always been one of her most remarkable achievements as a writer … Once the illness leaps from Judith to Hamnet in August 1596, the novel becomes a breathtakingly moving study of grief … O’Farrell’s portrait of maternal and sibling bereavement is so accurately expressed it’s almost too painful to read. Hamnet is, above all, a profound study of loss … At her best, O’Farrell is simply outstanding. Within pages, she can inhabit the mind of an owl, of a great playwright, of a dying boy, of those watching him. It seems she can pretty much do anything on the page that she puts her mind to. Immersive, at times shockingly intimate, and triumphantly brought to fruition, this is a work that ought to win prizes.” 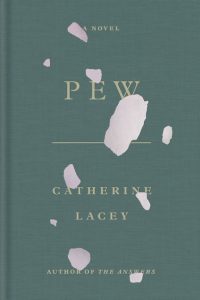 “Lacey works at the provocative end of contemporary American fiction, and Pew is her sharpest novel yet: a tale of the quiet savagery of ‘good’ intentions, and the tyranny—and ecstasy—of belonging … How easily, this novel shows, the language of forgiveness can become ‘a costume for forgetting’ … Lacey’s ferocious rebuke of church-sponsored sanctimony could easily slip into parochial caricature and contempt—fighting one form of self-righteousness with another—were it not for her silent protagonist, whose private, humane thoughts are our only guide to a world of long-held secrets … And while there may be allegories lurking here, the author offers no tidy moral to her anti-fable.”

3. The Pull of the Stars by Emma Donoghue

“… [an] arresting new page-turner of a novel … Readers familiar with Donoghue’s masterly 2010 best seller, Room, will recall the focused intensity she can bring to bear on constricted spaces … unfolds at the pace of a thriller … The narrow aperture of the maternity ward allows Donoghue to focus on one of the novel’s most compelling preoccupations: the lives and bodies of women … Even in Julia’s slightly euphemistic voice, the sheer attention devoted to these descriptions functions as a kind of unadorned reverence for the work and pain and strength of women—and how the paths of their lives are so often defined by the workings of their bodies … The scenes in the ‘fever/maternity’ ward are so enthralling that the novel loses a bit of its fire—and realism—whenever it leaves that room, but these departures are thankfully rare. Donoghue seems most interested in the dramas of this one space—with which she manages to make clear the broader constrictions and injustices of an entire Irish society.”

4. The Year of Witching by Alexis Henderson

“The Year of the Witching is Alexis Henderson’s debut novel, but you’d never know it. It’s so well crafted and her point of view so well honed it feels like it should be her third or fourth book. The story is enchanting, enticing, enthralling, enigmatic … Locations make manifest the existential horrors the characters experience. It’s a good thing, then, that Alexis Henderson is so damn good at it … It’s impressive work that reels you in … Unfortunately, the book’s ending doesn’t quite live up to everything that precedes it. Henderson lets certain characters off the hook and doesn’t demand as much from others as she needed to … With a keen eye and a sharp tongue, Henderson breathes new life into an old trope. Alexis Henderson is a fresh new voice in dark fantasy, and I look forward to hearing more from her.”

“Malerman balances the novel’s various elements—family drama, road novel, supernatural thriller—with skill and genuine compassion for his characters and their blighted lives. And if the final chapters, which are filled with reunions, reconciliations and sudden revelations, seem slightly rushed, that is a small flaw in an otherwise remarkable journey through an utterly compelling fictional world.” 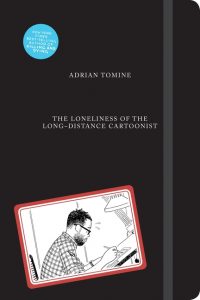 1. The Loneliness of the Long-Distance Cartoonist by Adrian Tomine

“.. funny, bracingly self-deprecating … From a less skilled creator, the litany of awkward encounters might have become repetitive; instead, Tomine’s mortifying misadventures become funnier and more emotionally resonant in the latter part of this memoir, as professional success and a growing family find the anger and anxiety that ruled the author’s early years transform into an insightful and profound vulnerability … A hilarious, frequently cringe-inducing masterpiece from a fearless artist at the height of his powers.”

Listen to an interview with Adrian Tomine here 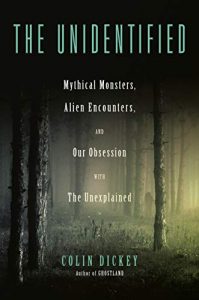 2. The Unidentified: Mythical Monsters, Alien Encounters, and Our Obsession with the Unexplained by Colin Dickey

“… fascinating, troubling, compassionate and—in the end—deeply thoughtful … Dickey uses such incidents not merely to tell good campfire stories but to illustrate their shared darker themes—a deep distrust of science and government, amplified both by self-promoters and by conspiracy lovers. And he notes that scientific arrogance and excessive government secrecy have fueled these fires … There’s nothing startlingly new or transformative in these conclusions. But Dickey’s sense of history reminds us of the complex reasons our odder beliefs endure. It’s not that we necessarily want weirdness, he suggests, but we do want wonder, we want the freedom of possibility. So there’s beauty and even comfort in the idea of ‘a world beyond our understanding, a world we can glimpse here and there but never fully see.'”

Read an excerpt from The Unidentified here

3. Twilight of Democracy: The Seductive Lure of Authoritarianism by Anne Applebaum

“Equal parts memoir, reportage, and history, this sobering account of the roots and forms of today’s authoritarianism, by one of its most accomplished observers, is meant as a warning to everyone … Sometimes too discursive, sometimes overlong (as on Laura Ingraham), the book is nevertheless critically important for its muscular, oppositionist attack on the new right from within conservative ranks—and for the well-documented warning it embodies. The author’s views are especially welcome because she is a deliberate thinker and astute observer rather than just the latest pundit or politico … The author is highly instructive on what is happening in the increasingly grim realm of the far right: a hardening of bitterness and unreasoning vengefulness and a resulting shift of the spectrum that puts a growing number of conservatives like Applebaum in the center … A knowledgeable, rational, necessarily dark take on dark realities.”

Read an excerpt from Twilight of Democracy here

4. The Double X Economy: The Epic Potential of Women’s Empowerment by Linda Scott

“… the coronavirus outbreak has made Scott’s message more urgent than ever … Scott isn’t above showing us her anger and frustration, usually in the form of bracingly barbed asides, which aren’t aimed exclusively at the usual suspects…But she isn’t all rage. Above all, Scott is practical and pragmatic. She has little time for hand-wringers of any variety, preferring to focus on briskly Getting Things Done … a breath of fresh, if infuriating, air. In a world where so many of us stick safely to criticising the status quo, it’s heartening to read someone willing to offer viable solutions. The question is, will any of us listen?” 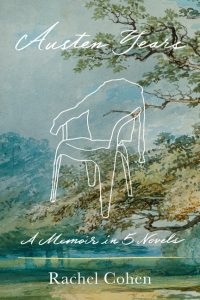 5. Austen Years: A Memoir in Five Novels by Rachel Cohen

“Cohen has taken her fascination with—and personal dependence on—one great author and transmutes it into something any reader in the world will find downright marvelous … The reading focus here, of course, is Austen, and even the most dedicated Janeites will find in these pages plenty of fascinating insights into their author. The book is at once an impressive analysis of Austen’s fiction and a first-rate biography of the author herself … a shining account of how indispensable books can be.”