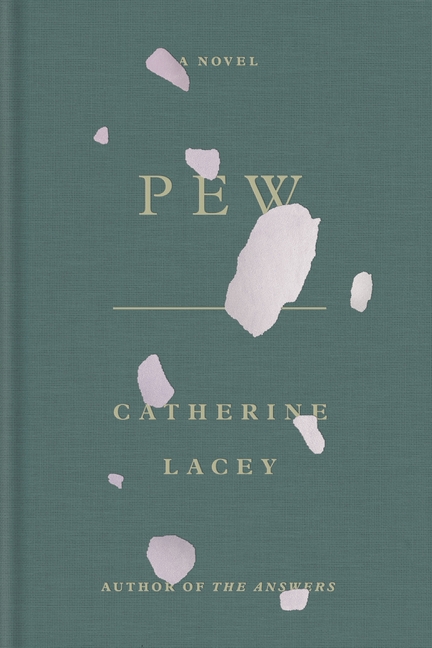 In a small unnamed town in the American South, a church congregation arrives to a service and finds a figure asleep on a pew. The person is genderless, racially ambiguous, and refuses to speak. One family takes the strange visitor in and nicknames them Pew.

What The Reviewers Say
Rave Beejay Silcox,
The Times Literary Supplement (UK)
Lacey works at the provocative end of contemporary American fiction, and Pew is her sharpest novel yet: a tale of the quiet savagery of 'good' intentions, and the tyranny—and ecstasy—of belonging ... How easily, this novel shows, the language of forgiveness can become 'a costume for forgetting' ... Lacey’s ferocious rebuke of church-sponsored sanctimony could easily slip into parochial caricature and contempt—fighting one form of self-righteousness with another—were it not for her silent protagonist, whose private, humane thoughts are our only guide to a world of long-held secrets ... And while there may be allegories lurking here, the author offers no tidy moral to her anti-fable.
Read Full Review >>
Rave Ryan Smernoff,
Los Angeles Review of Books
... prepare to face a utilitarian dilemma, embrace its discomfort, and respond to its challenge ... Though ostensibly a realist writer, her style ushers the reader into that delightfully uncanny space between fantasy and reality. The fable-like milieu that Pew inhabits creeps closer to surrealism than any of her previous works, and it does so while remaining in a very real—or at least recognizable—world. Her characters are built with greater nuance and charity than they are in her previous novels ... The most impressive feat Lacey has accomplished in her newest novel is the ambitious construction of the narrator: an unidentifiable stranger, apparently mute, lacking any clear markers of sex, race, age, or background. Some readers may find it difficult to buy into the narrator’s ambiguous identity ... But that difficulty is also a crucial element to what Lacey so magnificently accomplishes in this novel: a work that evokes the same presumptions and privileges in the reader as it does in its characters—particularly those of the townsfolk ... For anyone who values literature that tests commonly held standards regarding what a character should be and how they are developed, this is a book not to be missed. Its success at pushing beyond preconceived ideas about a character’s identity and narratorial credence will be discussed among writers for years to come.
Read Full Review >>
Positive Fiona Maazel,
The New York Times Book Review
... a timely entry into the conversation this country’s been having for years about 'otherness.' ... Who are these people? You’ve seen them before, which forecloses on opportunities the novel might have taken to explore a more nuanced version of, for instance, your standard missionary who patronizes the savages in the name of saving them. Still, it’s interesting to see all this from the 'savage’s' point of view.
Read Full Review >>
See All Reviews >>
SIMILAR BOOKS
Fiction

Milk Fed
Melissa Broder
Rave
What did you think of Pew?
© LitHub | Privacy