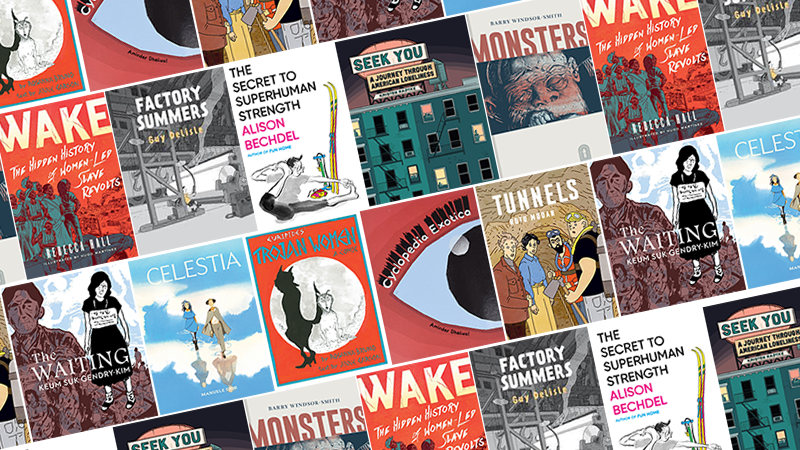 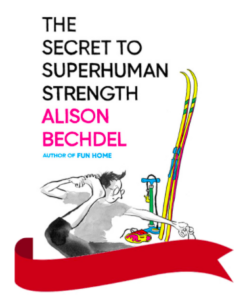 1. The Secret to Superhuman Strength by Alison Bechdel
(Houghton Mifflin)

“… a far more sprawling project than Bechdel’s two previous and entirely virtuosic graphic memoirs … The format is larger, too, and the reader feels more space on the page to breathe, which can’t be a random choice. (One imagines very little about the art Bechdel puts out into the world is random) … Bechdel also departs from her usual monochrome to offer a whole generous P. T. Barnum palette. And between chapters she includes airy spreads painted with a flowing brush instead of her trademark boxed-in drawings made with a quivering pen … The book makes you see exercising as a kind of touchstone, the way going back to the same place every year can be. You love to see the landscape, but the true experience is internal: dealing with your own change … Part of the pleasure of Bechdel’s books is the conversation she’s in with herself, all the layers: the drawings, the captions, the dialogue, the annotations of the world, the storyboards that move the narrative, the burbling monologue of her mind. This is a true delight of graphic literature, and nobody does it better. You feel as if you’re peering through a plexiglass panel right into Bechdel’s marvelous brain … Bechdel’s genius is such that even a plain old writer suddenly wishes for the ability to annotate her own text.”

2. Seek You: A Journey Through American Loneliness by Kristen Radtke
(Pantheon)

“Kristen Radtke’s Seek You: A Journey Through American Loneliness defies categorization—and it does so in spectacular fashion. At once a memoir, a personal essay about loneliness, an exploration of the science of solitude and its effects, and an invitation to come together in a world built to separate us, Seek You looks at isolation as a problem and investigates where it comes from, how it shapes us, and why we should battle against it … In Seek You, Radtke’s cuts to the marrow of our inner lives as well as our online lives and public selves to explore the ways in which community, interaction, and even touch affect us, especially when these elements are missing … The beauty of Seek You is that it feels like a communal experience. Reading this book is reading about ourselves and our lives … Seek You accomplishes a lot and its unique hybrid nature makes it a must-read. However, perhaps the most important thing it accomplishes is telling everyone that they aren’t alone in their loneliness, and that could be the first step into ending the loneliness epidemic.”

Read an excerpt from Monsters here

“Windsor-Smith is known for his meticulous inking, and his cross-hatching gives Monsters’ world and characters remarkable dimension. His inks are mostly very tight and specific, but in the opening sequence, the lines have a wildness that contributes to the chaos … As impressive as Windsor-Smith’s cross-hatching is, it’s equally powerful when he minimizes the linework … The superhero influence is strongest at the start of Monsters, and Elias’ mission to rescue Bobby unfolds in an exhilarating car chase that leads to a devastating shootout. The dramatic sound effects punctuate key moments in the action, and the shootout is a showcase of how lettering impacts storytelling, with line weight, letter shape, and balloon placement working together to create a feeling of total mayhem … Monsters has breakneck action and lots of atmospheric horror, but the majority of the book is domestic and workplace situations, highlighting Windsor-Smith’s skill with character acting. Emotional beats are exceptionally clear, and he pays close attention to the different ways people experience pain, internalize it, and release it. It brings vitality to these characters and conversations, and by withholding information, the script creates a sense of intrigue that keeps the momentum moving forward when there isn’t much in the way of spectacle.”

Read an excerpt from Wake here

“… embraces a more significant, more authentic history of resistance … Hall has offered up this ancestral pain and used it as a lens through which we might attend to those previously rendered invisible. The book’s unmistakable and unapologetic power is amplified by Martínez…His work evokes multiple symbols. Slave ships power through waves that look like both water and flames. They are an excellent accompaniment to Hall’s stories within the story … Hall has written, and Martínez has illustrated, an inspired and inspiring defense of heroic women whose struggles could be fuel for a more just future.”

“But even in this comic, the author appears before us in the guise we now know so well – a baffled outsider trying, and often failing, to navigate a culture that isn’t his own … But the book isn’t really about social class so much as it is about men and their agonising inability to talk to one another … It’s this plangent undertow that makes Factory Summers worth your time. We all know about summer jobs. Many of us have experienced the borderline bullying that comes with a certain kind of envy and fear. But the emotionally silent world of men is more difficult territory to reach and it finds its perfect expression here in Delisle’s effortless concision: so much paralyzing gaucheness in a beer belly, a pair of bandy legs, a head bent over a homemade sandwich; so much sadness in a single glance.”

“It’s a joy to come across a mistress of the art taking rumbustious pleasure in revisiting the matter of poetry itself … Simultaneously straight-talking and experimental, the Canadian has been reclaiming the classical tradition as an essential resource since the 1980s … her writing remains as fierce as ever. At this #MeToo moment protesting against the objectification of women, her Trojan women are drawn as literally animal, the spoils of war … Carson’s purposeful play bypasses nostalgia for the kind of traditional forms on display in another creative revisioning.”

“The current, intense political climate allows us to immediately pair each character’s situation to a very real physical and psychological human experience, which Dhaliwal constantly contrasts with old-world ideas and norms … The simple, quick line-art style partners really nicely with the colouring by Nikolas Ilic. Prior to publication, the novel was serialized on Instagram. The nature of Instagram’s aesthetic, with its daily panels, as well as the ideas it brings up against fake vs. real life, make the platform a perfect museum for the story. It’s fun to imagine this story coming out as a newspaper comic in earlier times. Reading the comics over breakfast, taking a look into how hypocrisy and prejudice can affect people, would have been a great meditation before the workday started. Today, it’s an all too relevant reminder that we should get to know our neighbors.”

“How to describe this complex and thrilling book? Think of it as Raiders of the Lost Ark as reimagined by a feminist Hergé, with a few light top notes of Raja Shehadeh thrown in for good measure (the latter being the Orwell prize-winning Palestinian lawyer who writes about hiking in the occupied territories). Every page is gripping, every frame profoundly political. If Modan has given us a tightly plotted adventure story, she has also delivered a brilliantly daring satire … To have built such a wonderfully witty and enjoyable comic on such vexed territory is quite some achievement. But then, Modan is a uniquely talented artist and writer.”

“Vividly rendered … The Waiting, is graphic novel as reclamation project, an attempt to preserve before it is too late not a documentary history so much as an emotional one … There is an immediacy, an intimacy, that emerges from these panels, which reveal both memory and art-making as processes. Nothing is fixed, Gendry-Kim is suggesting. We know ourselves only from the bits of information we have been allowed to have.”