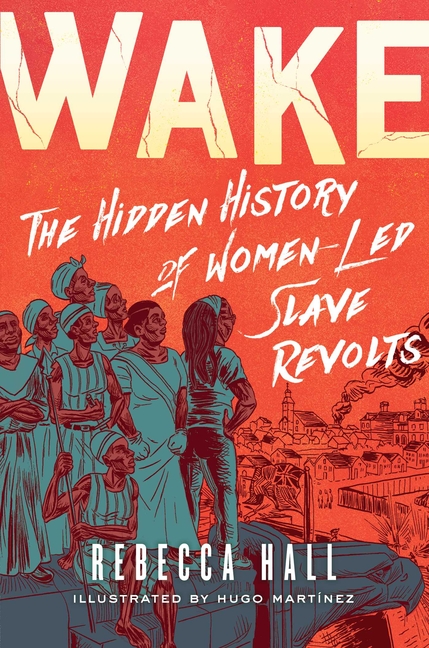 In this hybrid of graphic novel and memoir, a lawyer and historian brings to light the enslaved Black women warriors whose leadership of slave revolts has been overlooked in the historical record, narrating her own journey through the archives to uncover this lost history.

What The Reviewers Say
Rave Etelka Lehoczky,
NPR
Sprawling yet perfectly balanced, his two-page compositions wrap the reader up in Hall's thoughts ... Martínez' pages can be a bit overcrowded at times, with snarls of hectic lines obscuring his clever effects. But his versatility is amazing. He draws all sorts of complex scenes—from the interior of a log cabin in Nebraska to an Ahogi cavalry charge (a frontal view, no less!)—seemingly effortlessly ... Martínez' innovative techniques are crucial to Wake's success ... Hall's eloquence and frank emotionalism are transcendently realized in Martínez art, beckoning the reader inexorably into this story—even the parts that only take place inside Hall's mind. With its remarkable blend of passion and fact, action and reflection, Wake sets a new standard for illustrating history.
Read Full Review >>
Rave Rhea Rollmann,
PopMatters
Far from playing a marginal role, Hall’s work reveals women who were at the heart of organizing and leading revolts across the vast and pernicious expanse of the slave trade ... In telling these stories about which there are often gaps in the written record, the graphic component of the book becomes all the more important. Wake utilizes visuals–illustrated by comics artist Hugo Martinez–to full effect, and it behooves the reader to spend time studying what goes on in the background ... The graphic novel format lends itself exceptionally well to conveying this intersection of past and present, enabling readers to see it visualized on the page ... Given the paucity of historical data (although she has meticulously extricated a remarkable amount of it, despite being denied access to key records by the present-day corporations borne from slave-profits), Hall gives life to history by alternating narrated accounts of the facts-as-we-know-them, with passages reconstructing how the stories may have played out. She puts flesh on the bones of history, bringing stilted historical legal language to life with narratives that are stirring, emotional, inspiring ... The stories depicted in Wake are difficult ones–Hall reflects on the trauma that historians of the period often experience while studying it–and yet laying these truths bare, telling these stories with such pride and power produces a deeply inspirational effect ... a superb accomplishment on every level, and a book that every American needs to read.
Read Full Review >>
Rave Rosemary Bray McNatt,
The Guardian (UK)
... embraces a more significant, more authentic history of resistance ... Hall has offered up this ancestral pain and used it as a lens through which we might attend to those previously rendered invisible. The book’s unmistakable and unapologetic power is amplified by Martínez...His work evokes multiple symbols. Slave ships power through waves that look like both water and flames. They are an excellent accompaniment to Hall’s stories within the story ... Hall has written, and Martínez has illustrated, an inspired and inspiring defense of heroic women whose struggles could be fuel for a more just future.
Read Full Review >>
See All Reviews >>
What did you think of Wake: The Hidden History of Women-Led Slave Revolts?
© LitHub | Privacy