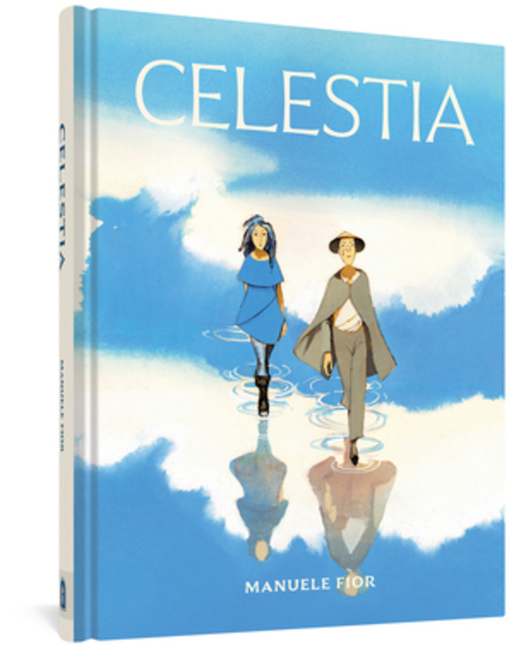 The author and artist of The Interview returns with a climate-change dystopia set on small concrete island called Celestia. Events push two young telepaths, Dora and Pierrot, to flee the island and set sail to the mainland, where they discover a world on the precipice of a metamorphosis.

What The Reviewers Say
Rave Peter Dabbene,
Foreword Reviews
With a prevailing aura of mystery, and unanswered questions about the details of the Great Invasion, the story is rich, satisfying, and complex. The book features striking, haunting visuals ... The art shows a practiced breadth of skill that encompasses tender emotions and dynamic action scenes. Celestia is a thoughtful, beautiful graphic novel.
Read Full Review >>
Rave Thuy Dinh,
Asymptote
Ambitiously realized by Manuele Fior and eloquently translated by Jamie Richards, Celestia—Venice’s oneiric double—is a visual poem and modernist dance in graphic novel form, encompassing diaphanous terrains and gothic undertow, exuberantly tumescent with allusions to literature, art, and architecture ... Richards’ expressive portrayal of Pierrot complements Fior’s suggestive approach. Their linguistic collaboration resembles a graceful pas-de-deux between layers of idea and perception. Fior’s painterly panels, like his organic narrative, often do not follow the sequential action-to-action layout of traditional comics, but employ disorienting shifts in perspective, scene, and mood—bringing to mind Brodsky’s metaphor of Venice as a trammeling labyrinth.
Read Full Review >>
Mixed Etelka Lehoczky,
NPR
Just like everyone else in cli-fi's intended audience, I am acutely aware of the problem of climate change. But that means that I'm also terrified down to my core ... One of the many delights of Celestiais that Fior knows how I feel—because he feels exactly the same way ... Fior even seems to have planned both books' artistic schemas to go easy on stressed-out sensibilities. Celestia—translated into English by Jamie Richards—is remarkably beautiful considering its post-apocalyptic setting ... Fior embraces and balances all sorts of oppositions in this book ... All this thematizing bogs down the narrative, unfortunately—or maybe it would be more accurate to say it fogs it. Pierrot and Dora often seem to be traveling through the hazy realms of dream rather than the real world, an effect that's heightened by Dora's psychic visions and Pierrot's penchant for speaking in rhyme. As a result, even their life-and-death scrapes lack urgency. The other characters, meanwhile, are all the kind of representative 'types' that generally figure in quest stories, and they often speak in riddles, too. It's hard to care about any of them. But maybe Fior means for his reader to feel this unwilling, perplexing emotional detachment.
Read Full Review >>
See All Reviews >>
What did you think of Celestia?
© LitHub | Privacy