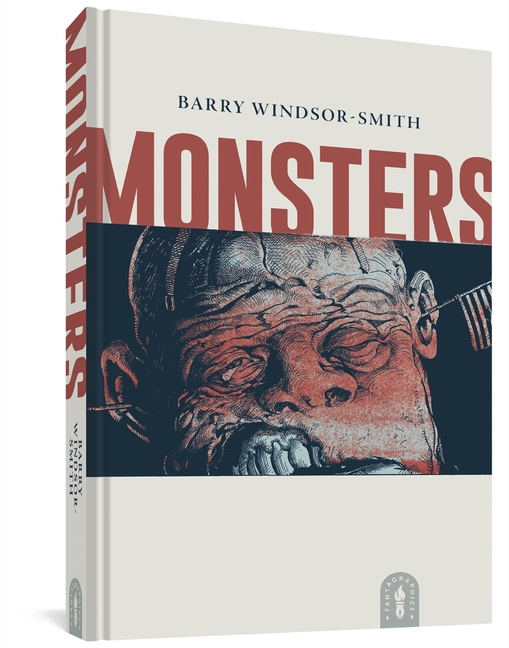 In this project 35 years in the making by comics legend Barry Windsor-Smith, it is the year 1964, and Bobby Bailey doesn't realize he is about to fulfill his tragic destiny when he walks into a U.S. Army recruitment office to join up. Part family drama, part political thriller, part metaphysical journey, Monsters offers a portrait of individuals struggling to reclaim their lives and an epic political odyssey across two generations of American history.

What The Reviewers Say
Rave James Smart,
The Guardian (UK)
... forcefully told and thoroughly affecting...the ambitious Monsters uses time lapses to great effect ... It feels a well trodden set-up, part Captain America, part Frankenstein’s monster ... A lesser writer might crank up the cliches another notch, and focus on the violence and drama of a super-soldier on the loose in 60s America. Windsor-Smith does give us shootouts, stakeouts and chases, but Monsters is more interested in turning back the clock. It’s a book about how we got here; a story about a lost boy, his put-upon mother and his brutal, traumatised father, about fraught dinners and PTSD, and about how it takes a monster to make one. And its telling is often brilliant ... Monsters hums with suppressed violence and regret, and Windsor-Smith renders both with real power. His command of pose and gesture...brings his cast to life. Some images stay with you ... a family drama of kindness, cruelty and redemption takes centre stage, offering the chance for a broken man to shed his skin, and begin again.
Read Full Review >>
Positive Ed Park,
The New York Times Book Review
Windsor-Smith conveys gruesome body horror and tender family scenes, nightmarish doom and quiet moments of connection ... things get really twisted ... Despite the ample page size, the compositions start off claustrophobic: all dark walls and densely crosshatched faces, the panels like prison cells. Marinated in chemicals, Bobby turns mute, massive and gruesome to behold, like a decaying Hulk. Perversely, what seems poised to be a story of a tortured soul’s revenge instead turns inward ... The excerpts from Janet’s diary form the emotional core of the book. Windsor-Smith’s overheated prose style is subtler and more convincing here, as he writes in the voice of a woman widowed by the war in spirit if not fact ... Windsor-Smith feverishly traces the roots of a single violent act backward and forward in time, across generations and nations and the border of life and death itself.
Read Full Review >>
Rave Matt Seneca,
The Comics Journal
The mood that Windsor-Smith summons in Monsters is simply more intense, more impactful...than all but a few other comics are capable of ... this material is elevated above the mass of genre comics by that realism, and its creator's formidable skill. Monsters feels like nothing so much as a comics version of Stephen King at the height of his prime—obsessed with both the vivid mundanity of midcentury suburban life and world-shaking powers that lie beyond the pale, fascinated by minor characters and protagonists alike, prone to lengthy anecdotes that seem disconnected from any forward narrative momentum until you realize they've just provided a big jolt of it. Windsor-Smith's art, full of little subtleties, meticulous about gesture and facial expression, wrapped in webs of densely crosshatched light and shade, is a perfect match for his story ... Windsor-Smith's writing is merciless, forcing readers to watch the slow unraveling of scenes whose tragic endings have already been well established, filling up densely paneled pages with back and forth dialogue exchanges that hurt the characters and make the readers feel it ... It's the kind of book that gets better with each rereading—the sci-fi elements are just extraneous enough, and the stark reality of the way the characters talk and move and hurt each other is only more affecting when you know what's coming.
Read Full Review >>
See All Reviews >>
What did you think of Monsters?
© LitHub | Privacy