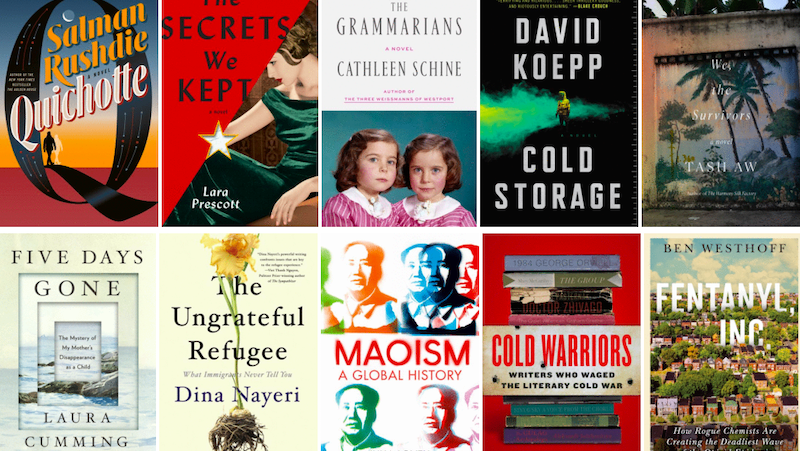 “Quichotte is one of the cleverest, most enjoyable metafictional capers this side of postmodernism … A glorious 21st-century riff on Cervantes’s 17th century classic Don Quixote … In Quichotte, Rushdie brilliantly demonstrates the way that a writer’s life seeps into their work, sometimes deliberately, sometimes less so … The narration is fleet of foot, always one step ahead of the reader—somewhere between a pinball machine and a three-dimensional game of snakes and ladders … We are a long way from the fertile lyricism of Midnight’s Children, and there is nothing here approaching the death of Changez Chamchawala in The Satanic Verses. But we are still watching a master at work … Rushdie has taken bits of our shared lives, scraps of our language, and constructed a vehicle as wondrous as Chitty Chitty Bang Bang. This novel can fly, it can float, it’s anecdotal, effervescent, charming, and a jolly good story to boot.”

Read an excerpt from Quichotte here

2. The Secrets We Kept by Lara Prescott

“The whirl of trench coats and cocktails and midnight meetings on park benches has the heady whiff of classic old-fashioned spy storytelling, but filtered, too, through Prescott’s thoroughly modern lens. And the result is something like a protofeminist Mad Men transposed to the world of international espionage—all excellent midcentury style and intrigue set against real, indelible history.”

3. The Grammarians by Cathleen Schine

“… marvelous … Schine finds the line between comedy and tragedy that she treads so skillfully in such novels as The Three Weissmans of Westport and They May Not Mean to But They Do (though as always she leans more on the side of comedy). Like her twins, she revels in language, its idiosyncrasies and our mangling of it … you don’t need to be a writer or editor to fall under Schine’s spell.”

Read an excerpt from The Grammarians here

“… Koepp has paged through the catalog of dark biology and found something truly delicious: a genus of parasitic fungi that makes Ebola look like the sniffles … This is a classic thriller in the tradition of Crichton and Richard Preston … if you relish, as I do, horrendous and revolting descriptions of distended bodies writhing and heaving and ribcages bursting open with the sound of snapping sticks and guts flying into the faces of dumbfounded people, and if you like the image of unwholesome green globules of fungus bubbling along the ground toward a paralyzed scientist, then this is the thriller for you. But Koepp is better than Crichton in three significant ways: He writes well, he has a wicked sense of humor and his characters are so keenly, intelligently and even movingly drawn that they might have stepped out of a literary novel. On every level, Cold Storage is pure, unadulterated entertainment.”

5. We, the Survivors by Tash Aw

“…[a] captivating novel … As Hock and his interviewer seek to understand what brought him to kill, readers are drawn into a Malaysia overwhelmed with thousands of immigrants seeking refuge, employment, and survival. Aw’s potent work entraps readers in the slow, fateful descent of its main character, witnessing his life spiral to its inevitable conclusion.”

“The facts of the story and their resolution command attention, but in the end, they’re less interesting than the author’s process of thinking about them. As she looks at photo albums with the eye of a scholarly detective, she discerns patterns of gaps and absences … Her nuanced, pensive account restores reality and vitality to figures from out of the past, making them meaningful while uncovering their secrets. A satisfying mystery that could have been grist for Agatha Christie’s mill.”

Read an except from Five Days Gone here

2. The Ungrateful Refugee: What Immigrants Never Tell You by Dina Nayeri

“…a searing, nuanced and complex account of her life as a refugee and of the experiences of other more recent refugees from Syria, Iran and Afghanistan. The stories are terrifying, disheartening, sometimes uplifting and definitely worth reading and meditating on … Then there are the government bureaucracies that certify some refugees’ stories as ‘believable’ enough for asylum and others not so much. Through her narrative, Nayeri makes vividly clear the Catch-22 of the process, especially for those asylum-seekers who are poorer, less educated and more desperate … Nayeri is neither a journalist nor a polemicist. She’s a storyteller who invites our moral engagement. She doesn’t write directly about the situation at the U.S. southern border, but an engaged reader will certainly infer the stark human costs of our current official attitudes and policies.”

“Until now no one has written a book about the phenomenon of Maoism. This has been gloriously rectified (as Maoists might put it) by Julia Lovell … a history that is revelatory and instructive, without ever being dull. Indeed in retrospect, while some of it is still scary, a lot of the material here is full of a dark humour … One of my favourite chapters in the book is also the closest to home. It’s the part where Lovell describes how Maoism appealed to people in the western democracies … As Lovell shows in this beautifully written and accessible book, atrocity and absurdity were always Maoist bedfellows.”

Read an excerpt from Maoism: A Global History here

“White illuminates the precarious place of literature in a world swarming with spies eager to manipulate—even to enlist—authors to advance their shadowy agendas. Readers witness the ruthless brutality of Soviet authorities imprisoning and executing dissident writers, but they also penetrate the deceptions of American and British intelligence agencies playing authors as pawns. A compelling reminder of literature’s influence—and vulnerability—in a world of power politics.”

5. Fentanyl, Inc.: How Rogue Chemists Are Creating the Deadliest Wave of the Opioid Epidemic by Ben Westhoff

“… a history lesson on American drug use and drug laws, a crash course in chemistry and neuroscience, a multifaceted portrait of addiction and a look at how harm reduction programs can atone for the failures of the War on Drugs … a finely woven and accessible analysis of the connection between university chemistry professors, dark web sales, drug cartels, law enforcement, and the dealers and addicts dependent on it … Westhoff is a skilled and empathetic biographer, and this gift serves the composite of the dealers, users and bereaved of Fentanyl, Inc. Throughout the book are the human faces and voices of the crisis: their insights, their histories … It’s in this focus on the human cost of the crisis, of empathy over criminalization, that this accomplished book feels most urgently important.”