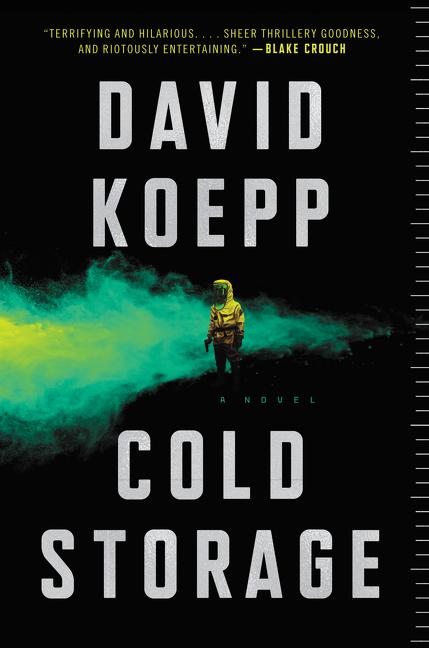 In renowned screenwriter David Koepp's fiction debut, a long-forgotten but deadly organism stored in a deep cave becomes a chilling threat, and a retired bioweapons agent and two security guards are the only ones who can stop it.

What The Reviewers Say
Rave Douglas Preston,
The New York Times Book Review
... Koepp has paged through the catalog of dark biology and found something truly delicious: a genus of parasitic fungi that makes Ebola look like the sniffles ... This is a classic thriller in the tradition of Crichton and Richard Preston ... if you relish, as I do, horrendous and revolting descriptions of distended bodies writhing and heaving and ribcages bursting open with the sound of snapping sticks and guts flying into the faces of dumbfounded people, and if you like the image of unwholesome green globules of fungus bubbling along the ground toward a paralyzed scientist, then this is the thriller for you. But Koepp is better than Crichton in three significant ways: He writes well, he has a wicked sense of humor and his characters are so keenly, intelligently and even movingly drawn that they might have stepped out of a literary novel. On every level, Cold Storage is pure, unadulterated entertainment.
Read Full Review >>
Rave Toni V. Sweeney,
New York Journal of Books
In Cold Storage, David Koepp easily transfers to novel from his experience as the screenwriter of such recognizable movies as Jurassic Park and War of the Worlds, giving this story the sense of immediacy and danger those films contain ... He also gives the reader an extensive biography of the more notable characters, so we are not only familiar with them but will ultimately be touched with their fates. No one is simply introduced and immediately dispatched/written out without us knowing his name, occupation, and various eccentricities. Cold Storage is one of the most intriguing, frightening, yet entertaining novels of this genre this reviewer has read in a long time. Easy to read, easy to understand, its characters are enjoyable, brave, clever, and surprisingly funny in the face of catastrophe.
Read Full Review >>
Positive Tom Shippey,
The Wall Street Journal
...a classic nerve-shredder, written with all the pace and sudden switches you would expect from a screenwriter like Mr. Koepp ... The threat builds exponentially ...We get to see things the way the fungus sees them as well, or anyway perceives them. If there’s a moral, it’s a good sci-fi one: We’ve gotten used to things being OK, but humanity can’t afford to drop its guard. Not all fungi move slow.
Read Full Review >>
See All Reviews >>
What did you think of Cold Storage?
© LitHub | Privacy