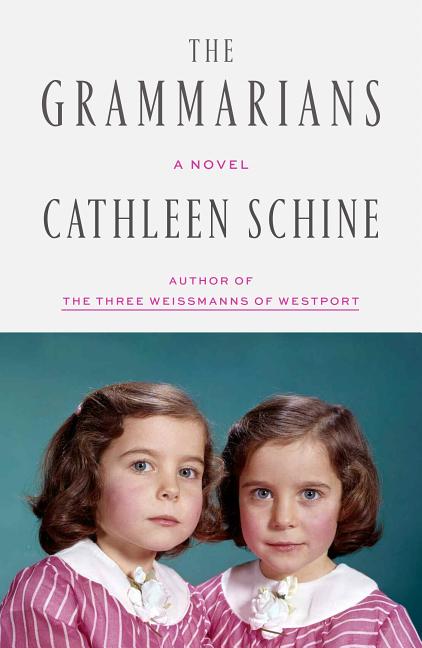 Laurel and Daphne Wolfe, identical, inseparable redheaded twins, share an obsession with words. As adults making their way in 1980s Manhattan, their verbal infatuation begins to push them apart. Their fraying twinship finally shreds completely when the sisters go to war over custody of their most prized family heirloom: Merriam Webster's New International Dictionary, Second Edition.

What The Reviewers Say
Rave Ann Levin,
The Associated Press
Cathleen Schine's captivating new novel, The Grammarians, centers on a pair of identical twins named Daphne and Laurel, after the Greek myth of transformation, and their obsessive love of language. It's also about their family, and what happens to them as they grow older and some die. In short, it's about everything and nothing, written with the tender precision and clarity of a painting by Vermeer, had that 17th-century Dutchman portrayed scenes of middle-class Jewish life in mid- to late 20th-century New York ... Schine...knows a thing or two about words herself. She moves the plot forward from decade to decade, evoking entire neighborhoods, social and economic strata, and fads and fashions, with just a few strokes. The point of view shifts seamlessly...And even though Schine herself is not a twin, she writes convincingly about twinship ...[a] wry and elegant novel.
Read Full Review >>
Rave Alan Hollinghurst,
The New York Review of Books
... brilliantly funny ... Schine is...a novelist of sustained light wit and great formal economy. Her scenes in this new novel are especially lean and staccato, everything counting, the dialogue concise and convincingly absurd. She knows the importance, for any good comedy, of characters who are consciously funny as well as those who are unknowingly so ... At its snappiest, the talk in her novels is like a very well written sitcom, shaped in short scenes, with little narrative padding. The risk entailed in so brisk and hilarious a performance is that the characters may seem more the properties of an enormous predetermined joke than plausible human beings ... Schine explores the paradoxes of twinhood deftly ... Schine...runs 'ten years, twenty, maybe, thirty' into the future, seeing her daughters grow old. The effect is beautiful, wistful, wry ... It also inevitably gives us a tantalizing sense of a good hundred pages or more of the story that Schine could have given us if she’d cared to. Readers may be unsure if this last-minute dash is a narrative coup or a gracefully handled cop-out. Either way, it is hard not to feel that the real life of the book lies not in its coda but in its sparkling exposition and development.
Read Full Review >>
Rave Connie Ogle,
The Star Tribune
... marvelous ... Schine finds the line between comedy and tragedy that she treads so skillfully in such novels as The Three Weissmans of Westport and They May Not Mean to But They Do (though as always she leans more on the side of comedy). Like her twins, she revels in language, its idiosyncrasies and our mangling of it ... you don’t need to be a writer or editor to fall under Schine’s spell.
Read Full Review >>
See All Reviews >>
SIMILAR BOOKS
Fiction

Mona at Sea
Elizabeth Gonzalez James
Positive
What did you think of The Grammarians?
© LitHub | Privacy