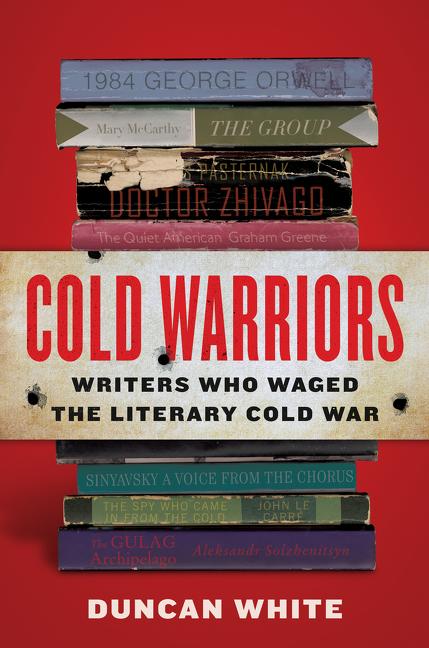 During the Cold War, literature was both sword and noose. Novels, essays and poems could win the hearts and minds of those caught between the competing creeds of capitalism and communism. They could also lead to exile, imprisonment or execution if they offended those in power. The book has at its heart five major writers—George Orwell, Stephen Spender, Mary McCarthy, Graham Greene and Andrei Sinyavsky—but the full cast includes many more.

What The Reviewers Say
Rave Bryce Christensen,
Booklist
White illuminates the precarious place of literature in a world swarming with spies eager to manipulate—even to enlist—authors to advance their shadowy agendas. Readers witness the ruthless brutality of Soviet authorities imprisoning and executing dissident writers, but they also penetrate the deceptions of American and British intelligence agencies playing authors as pawns. A compelling reminder of literature’s influence—and vulnerability—in a world of power politics.
Read Full Review >>
Positive Thomas Mallon,
The Wall Street Journal
... [White] captures something essential about McCarthy ... Mr. White unfolds the sordid tale of Soviet literary history through all its later decades of crackdowns, thaws and renewed panics ... Tonally judicious, Mr. White remains alert to democratic excess in combatting horrors on the totalitarian side. But touches of what Jeane Kirkpatrick used to call 'moral equivalence' inevitably result. Having done such a good job showing the sufferings of writers under Nikolai Yezhov ’s NKVD, the author might reconsider writing, 500 pages later, that 'the paranoia of the Cold War was bipolar' ... With so much background to be filled in, the book sometimes strays from its specific, subtitular mission and turns into a history of the Cold War itself. One wishes Mr. White hadn’t bothered to deal with Kim Philby at such length ... consistently absorbing, its prose clear and its syntax sure-footed. But a certain entropy threatens the book. As it flies in different directions, chronology hits some air pockets ... Here and there an error catches the eye ... One of the virtues of his book is the way it makes a reader acknowledge how close the weary West came to losing its nerve.
Read Full Review >>
Positive Laura Freeman,
The Times (UK)
... absorbing ... This is a long book, but it was a long war ... reads like a thriller ... this is also a book about personal and political liberty; about the freedom to write, mock and dissent; about truth, lies and wilful ignorance ... If some of the stories are familiar, the scale of White’s book means there is always an author and an anecdote you haven’t heard ... [an] ambitious, intelligent, searching history.
Read Full Review >>
See All Reviews >>
SIMILAR BOOKS
Biography

Tecumseh and the Prophet: The Shawnee Brothers W…
Peter Cozzens
Rave
What did you think of Cold Warriors: Writers Who Waged the Literary Cold War?
© LitHub | Privacy