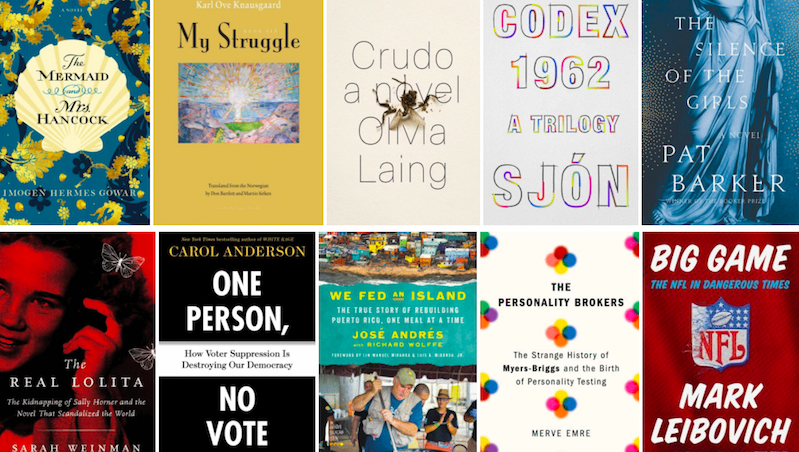 Featuring the real Lolita, voter suppression in America, the end of Knausgaard's struggle, and more

1. The Mermaid and Mrs. Hancock by Imogen Hermes Gowar

“With its richly imagined Georgian London setting, The Mermaid and Mrs Hancock is a cracking historical novel, with a twinge of the surreal, about passion and obsession, dreams and reality. Imogen Hermes Gowar may be a first-time author, but she has a distinctive voice so assured and so readable that she could be a veteran. The novel immerses you in a world in a way that reminds me of Susanna Clarke’s Jonathan Strange & Mr Norrell … The story is by turns intriguing, touching, funny, sad and heartwarming. It will make you laugh and it may make you cry. Mostly, though, the cast of endlessly engaging characters will keep you turning the pages until you get to the wholly satisfying ending.”

“This uncertainty as to seriousness, of not knowing what the weight of experience is—the literary term is bathos—is My Struggle’s pervasive feeling. It’s the feeling, both thrilling and confusing, of encountering somebody who doesn’t know the unwritten rules. They are unwritten because they are deep inside us; they are the rules of society, which are part of our identity. On every page of My Struggle we are reminded of these rules, which human beings follow instinctively and as a matter of self-preservation, because Knausgaard disregards them. We feel viscerally that he shouldn’t be telling us what we nonetheless can’t stop reading because we know exactly what he means.”

“The risk of prose that tries to capture the sentiments of the immediate present is that it tends to take on the rubbery chew of an op-ed. Fortunately, Laing’s novel is too headlong for that. There is no sense of slowing the mad dash of the present to make it more comprehensible to some hypothetical future reader. For that reason, Crudo could turn out to be a novel that we pick up years from now to remind ourselves how these times felt … Love may not be original, but this funny, fervent novel is.”

“…it is undoubtedly Sjón’s masterpiece … This playfulness is something Sjón is known for, his work often flitting between realism, fairytale, and the surreal. But here, genre is explicitly invoked, leading us to wonder how the titles come into play within the greater structure of the story … CoDex is more an anthology of stories than it is a straightforward sequence … by shunning traditional narrative structures, Sjón instead alludes to the greater patchwork of stories that make up world literature … in CoDex, we really see Sjón’s storytelling style in epic scale—and it’s anything but serious. Important, yes. But as playful, and funny, and experimental as Bulgakov’s The Master and Margarita.”

5. The Silence of the Girls by Pat Barker

“This is an important, powerful, memorable book that invites us to look differently not only at The Iliad but at our own ways of telling stories about the past and the present, and at how anger and hatred play out in our societies … Barker’s novel is an invitation to tell those forgotten stories, and to listen for voices silenced by history and power.”

Read Pat Barker on the books in her life here

1. The Real Lolita by Sarah Weinman

“By combing through court documents and newspaper accounts and interviewing surviving friends and family members, Weinman has evocatively reconstructed Sally’s nightmare, as well as the sexual mores of mid-20th-century America … Weinman has compassionately given Sally Horner pride of place once more in her own life, a life that was first brutally warped by Frank La Salle, and then appropriated by one of the most brilliant writers of the 20th century.”

2. One Person, No Vote by Carol Anderson

“Anderson has a gift for illustrating how specific historical injustices have repercussive, detrimental influence on contemporary American life … Throughout One Person, Anderson’s tone, at turns urgent and indignant, seems to arise from the ease with which she can document abundantly—via investigative journalism, popular history and historical scholarship—the GOP’s determined efforts ‘to purge American citizens and cull and homogenize the electorate.’ The book’s final chapter is called The Resistance and that is likely our only recourse: To sustain American democracy, we must collectively resist state-run purges of legal voters. Anderson knows this, hammering her overarching claim through quotation of Abraham Lincoln: ‘I believe this government cannot endure, permanently half slave and half free.'”

3. We Fed an Island by José Andrés with Richard Wolffe

“We Fed an Island isn’t just a memoir, or even a memoir with message—it’s an impassioned call to action … a tremendously valuable first-hand account of just what disasters look like — both the ones that nature visits upon us and those that we and our governments visit upon ourselves. It is both cynical and immensely optimistic, and it is ultimately heartwarming.”

4. The Personality Brokers by Merve Emre

“It takes a while to realize that Emre has gotten you hooked under arguably false pretenses, but what she finally pulls off is so inventive and beguiling you can hardly begrudge her for it … The Personality Brokers is history that reads like biography that reads like a novel—a fluid narrative that defies expectations and plays against type … The Personality Brokers contains a judicious amount of historical context … it’s Katharine and Isabel who are at the core of this story, and Emre depicts these two women—long dead and largely unknown—with the acuity they deserve. Isabel, in particular, is drawn with precise, confident strokes.”

Read an excerpt from The Personality Brokers here 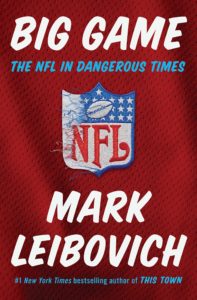 “Too violent, too soft, too nationalistic, too unpatriotic—is pro football in trouble? There was a day, writes The New York Times Magazine’s chief national correspondent, Mark Leibovich, in Big Game, a gossipy, insightful and wickedly entertaining journey through the N.F.L. sausage factory, when the league could make sticky problems disappear. Not anymore … Reading Big Game—a sparkling narrative—one gets the sense that, ‘dangerous times’ aside, the N.F.L. will survive on the magnetism of the sport it so clumsily represents.”