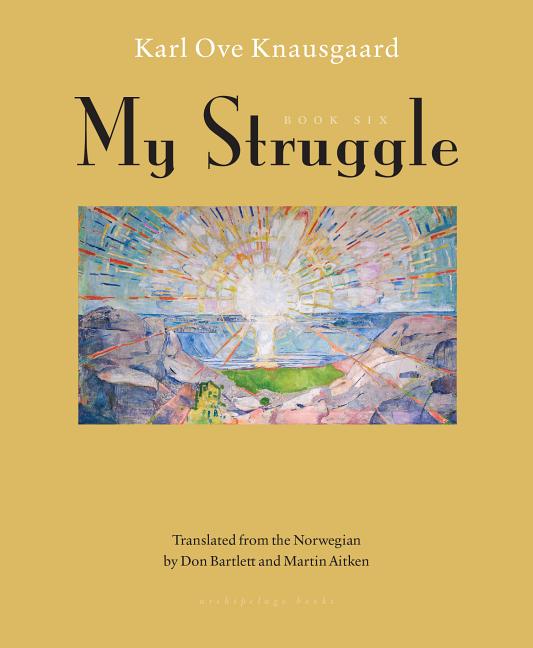 The final installment in Knausgaard's monumental autofiction project, focusing on the consequences the series has had on the author's life and the lives of those around him.

What The Reviewers Say
Rave James Camp,
Bookforum
In its long, wandering sentences, in which so much that is unalike is swept up and suspended, the grammar seems to stretch to accommodate this contradiction: that details mean both nothing and everything ... This uncertainty as to seriousness, of not knowing what the weight of experience is—the literary term is bathos—is My Struggle’s pervasive feeling. It’s the feeling, both thrilling and confusing, of encountering somebody who doesn’t know the unwritten rules. They are unwritten because they are deep inside us; they are the rules of society, which are part of our identity. On every page of My Struggle we are reminded of these rules, which human beings follow instinctively and as a matter of self-preservation, because Knausgaard disregards them. We feel viscerally that he shouldn’t be telling us what we nonetheless can’t stop reading because we know exactly what he means.
Read Full Review >>
Positive Hari Kunzru,
4Columns
At 1,156 pages, this final volume is sprawling and episodic. It is also a public performance, in that it was written as the drama around the publication of the earlier volumes was unfolding. There is a sense of the worm eating its tail or tale ... There are moving passages in the new book, notably a painful discussion of his wife’s bipolar disorder ... Book Six should finally put to rest the interpretation of the early volumes of My Struggle as the work of a 'noble savage,' a deliberately artless or unmediated outpouring. Knausgaard is frank here about his artifice and more than happy in the realms of intellectual abstraction ... his explorations seem urgent, part of an attempt to present 'a man in full,' to give weight to every part of his life, connecting his intellectual preoccupations to his domestic ones ... It is instructive to watch an attentive novelist sifting through what is known about Hitler’s hungry early years ... Knausgaard’s intention is not to recuperate or exonerate Hitler, but to suggest that presenting him as an immutable figure of evil, as Kershaw feels duty bound to do, is a sort of fictionalization ... By its nature, My Struggle—a vast text produced at a breakneck pace—is a patchy, imperfect book, but reading it is an unforgettable experience. Knausgaard’s presentation of self is not only a democratic assertion of the importance of an ordinary life, but also a major contribution to the scant literature of fatherhood.
Read Full Review >>
Pan Dwight Garner,
New York Times
...a gift to his detractors, those who have found the books to be solipsistic and overwrought. At nearly 1,200 earnest pages, Book Six is a life-drainer, so dense and so dull that time and light seem to bend around it. I had to flog myself through it. I carried it under my arm like a football, giving the Heisman Trophy push-off to friends, family, basic hygiene, Netflix and the pets. When I finished, I felt there were fang marks in my neck; I wanted a blood transfusion. There are few books I will more avidly not read again ... Especially trying is Book Six’s 400-plus page excursus into Hitler and the etiology of the Third Reich. It is a grindingly sophomoric exercise that sits undigested under this novel’s skin, like an armchair inside a snake ... This book is the largest in the absorbing My Struggle series, but curiously it’s the runt of the litter.
Read Full Review >>
See All Reviews >>
What did you think of My Struggle, Book Six?
© LitHub | Privacy