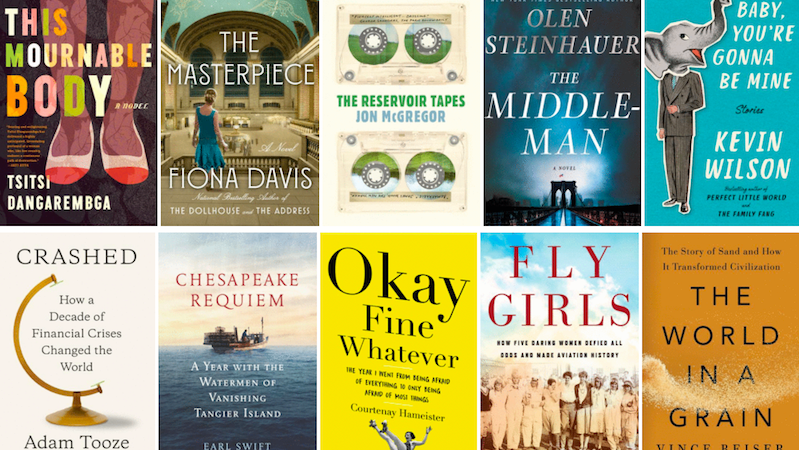 1. This Mournable Body by Tsitsi Dangarembga

“At times This Mournable Body is a difficult read. Tambudzai is a complex character, bitter and not particularly likable, with inner demons that threaten to derail her. But this is what makes the novel compelling—it’s unpredictable, and you can’t help but feel that Tambudzai is always about to snatch defeat from the jaws of victory. Couple this with the complexity of Zimbabwe—political uncertainty, economic instability and a society that seems ready to attack itself—and Dangarembga has written an unflinching account of one woman’s struggles in a country that is rife with them.”

2. The Masterpiece by Fiona Davis

“Davis…has written another paean to a New York City landmark. Historical fiction fans will love the compelling dual narrators and time periods perfectly captured in this novel based on the history of one of the busiest transportation hubs in the world.”

Read Fiona Davis on the Grandest Buildings in Literature here

3. The Reservoir Tapes by Jon McGregor

“An electrifying new novel … a stylish and alarming new book … Handled with less inventive prose, a book like this might feel like a series of Stephen King-ish portraits of small people being horrible. But McGregor’s too inventive a writer not to dazzle and surprise, to create moments that confound and stir. In pages that recall some of our most excitingly dense and playful postmodern stylists, such as Padgett Powell and Robert Coover, it becomes clear, rather quickly, how dedicated to, among other pursuits, McGregor is to crafting first and final sentences”

4. The Middleman by Olaf Steinhauer

“The Middleman is smart and entertaining and consistently intriguing, clipping along in brief chapters, somewhat reminiscent of the novels of James Patterson, and often animated by lovely, spare descriptive writing … Yet because the premise of The Middleman is so audacious and because its point of view is fragmented, the novel doesn’t fully exhibit the propulsive force of some of Steinhauer’s spy fiction … What makes up for that is the neat feat of asking serious political questions without burdening the suspense.”

5. Baby, You’re Gonna Be Mine by Kevin Wilson

“[The stories in Baby, You’re Gonna Be Mine] all build on each other in strange and remarkable ways, showcasing Wilson’s crackling wit and big heart … Filled with imagination, humor and wit, Baby, You’re Gonna Be Mine is an exuberant collection of captivating and charmingly bizarre stories that promise to burrow their way into your heart and soul.”

Read an excerpt from Baby, You’re Gonna Be Mine here

1. Crashed: How a Decade of Financial Crises Changed the World by Adam Tooze

“There have been many, many books about the financial crisis, but few, if any, have treated it as a world-wide event…This is economic history on an epic scale, and readers who persevere through the book’s roughly 600 pages of text will find many surprises … At times, Mr. Tooze lets his outrage get the better of him. He suggests that the United States might have shortened the crisis by nationalizing sick banks, but he fails to note that Britain and Germany achieved little by doing just that … Nonetheless, Mr. Tooze has written a valuable book about the challenges of managing a tightly connected world economy. The questions he raises resonate in the Age of Trump.”

2. Chesapeake Requiem: A Year With the Watermen of Vanishing Tangier Island by Earl Swift

“As could probably be predicted from his extensive writing history, he’s a first-rate observer, well able to portray pathos without sentimentality. He follows the people of Tangier Island through the various minutiae of their daily lives, bringing their humanity to life at every turn. And he fore-grounds his narrative with a succinct description of the torturous genesis of the blue crabs that form the basis of the areas entire economy … It was the locational bedrock of Tangier Island’s economy, but it’s largely irrelevant if Tangier Island isn’t there anymore. The blue crab industry in the Chesapeake will continue, but as Chesapeake Requiem makes eloquently, heartbreakingly clear, it will continue without Tangier Island.”

3. Okay, Fine, Whatever by Courtenay Hameister

“Hameister is deeply, self-deprecatingly funny like this as she examines her fate as a ‘professional nervous person”’ … But the core of these essays is a dreaded trifecta of anxiety, body image (‘I will never be thin enough to be the fat girl in a movie’) and dating, which Hameister tackles with admirable honesty and wit … Courtenay Hameister’s Okay Fine Whatever is endlessly funny and brutally honest.”

“Drawing on abundant sources, including letters, published and unpublished memoirs, newspaper reports, and archival material from more than a dozen museums and historical collections, O’Brien has fashioned a brisk, spirited history of early aviation focused on 5 irrepressible women … A vivid, suspenseful story of women determined to defy gravity—and men—to fulfill their lofty dreams.”

=4. The World in a Grain of Sand by Vince Beiser

“[Beiser] has delivered an inevitable warning cry to generations of citizens who historically seemed to have taken sand for granted … Beiser never leans too heavily on what another author would presume to be the common reader’s ignorance of sand. His informal research is delivered gracefully: not in order to condescend or perpetually amuse, but to guide the reader … The author does his best work when venturing out of the sandbox of scientific explanation and into the field of human nature. Beiser displays an attractive affinity for beginning each chapter with a glimpse into the perspectives of either a historical figure or a present-day survivor … With these personal stories…Beiser grips the reader, while providing evidence of sand’s multilayered history.”