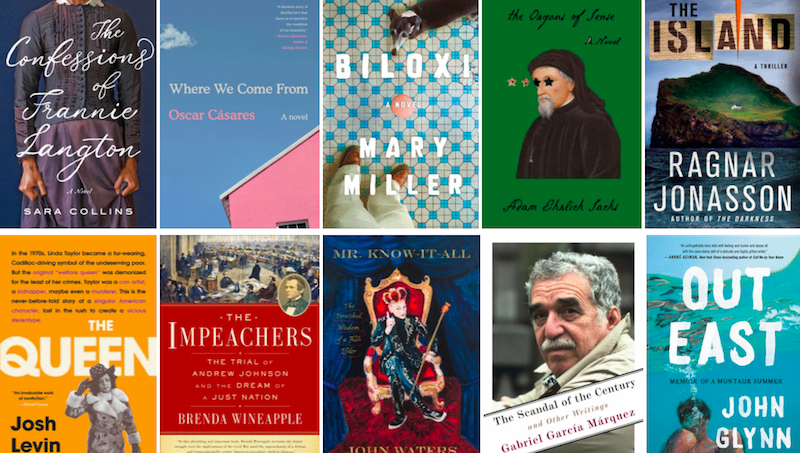 A collection of Gabriel García Márquez’s early journalism, a timely reinvention of the gothic novel, and a tome of filthy wisdom from John Waters are just some of books that the critics loved over the past seven days.

1. The Confessions of Frannie Langton by Sara Collins

“…a bold and timely reinvention of the classic gothic novel: this is a story unashamedly immersed in its literary heritage … Collins’s writing throughout has a visceral and immediate quality, immersing the reader both in period detail and in Frannie’s experiences … There is an impressive smorgasbord of themes at play: race, gender, class, sexuality, depression, science, education and the psychological effects of servitude. In Frannie Langton, Collins has created a truly memorable heroine and written a compelling gothic novel for our times.”

2. Where We Come From by Oscar Cásares

“In Cásares’ hands, the story is a concise and thoughtful meditation on spaces: particularly the idea of home, both ancestral and structural … The construction of the new book is remarkable for its efficiency. Cásares writes with a leanness evident in a short story, but the thematic content is grand and provocative.”

“As disagreeable and contrary as they come, Louis is a narrator readers will want to hug and throttle with equal urgency, sometimes simultaneously. Delightful at sentence-level, this is foremost the story of his sluggish-but-sure metamorphosis. Even Layla gets a second act readers won’t see coming. Miller, an absolute master of minutiae, relates Louis’ innermost self with poignancy and humor that never sacrifice an ounce of realism.”

4. The Organs of Sense by Adam Ehrlich Sachs

“…filled with delightful tales of palace intrigue, sibling rivalry, and extensive forays into empirical thought and logic. Deep philosophy is applied to nearly everything that pops up, including the eating of soup. Yet despite these heavy themes, Sachs applies a liberal does of clever humor throughout; nearly everyone is a charlatan in what might be the most lighthearted work about the history of science ever published … Great fun and notable for its singular style, playful tone, and sense of economy, this impressive debut is for fans of George Saunders and Vladimir Nabokov.”

Read an excerpt from The Organs of Sense here

5. The Island by Ragnar Jonasson

“If you like plots to be linear and told through a single character’s viewpoint, this novel will drive you batty. If, conversely, you’re a more relaxed reader and love stories that snatch you up by surprise and carry you along in unrelenting suspense, then this brilliantly woven tale will give all you crave … what makes the book’s suspense excruciating is its creepiness … if you relish seeing how ordinary people of good heart and intentions can get twisted off the right path, and sink deeper into serious trouble while they wrestle with their consciences, then The Island will satisfy your desire to think, feel, and shudder to its logical and somewhat surprising resolution.”

Read an excerpt from The Island here

1. The Queen: The Forgotten Life Behind an American Myth by Josh Levin

“The verve and humor of Levin’s writing mirrors the brazenness of the crimes Taylor committed under various false identities … You can feel Levin’s respect for Taylor’s daring … Taylor is like a one-person, low-rent Ocean’s 11, and you can’t help but marvel at the ingenuity with which she kept it up for decades. Neither can Levin, who ends virtually every chapter with a cliffhanger, tantalizing us with clues to Taylor’s next big scam … Levin makes sure that her story is heard and that we know its tragedy, which is that Linda Taylor was doomed from the moment she was born.”

2. The Impeachers: The Trial of Andrew Johnson and the Dream of a Just Nation by Brenda Wineapple

“Wineapple started to research her history of the country’s first impeachment trial six years ago; she briefly mentions Presidents Nixon and Clinton but not the current occupant of the White House. She doesn’t have to. The relevance of this riveting and absorbing book is clear enough, even if Wineapple’s approach is too literary and incisive to offer anything so obvious as a lesson … Wineapple’s depiction of Johnson is so vivid and perceptive that his standoff with Congress arrives with a doomed inevitability … Wineapple dips into the intrigue and the whiffs of corruption that surrounded the vote, including a cloak-and-dagger narrative that features incriminating telegrams. She brings the same feel for drama to the trial itself…”

3. Mr. Know-It-All: The Tarnished Wisdom of a Filth Elder by John Waters

“Waters talks about Hollywood and the film business with the candid attitude of someone who truly does not give a shit if his phone ever rings again, and Waters speaks with the same frankness on subjects ranging from ‘teen tragedy’ novelty records to the racial politics of the Yippie movement in his new book, Mr. Know-It-All. Like most of Waters’ books, Mr. Know-It-All is composed of freestanding chapters that are part memoir, part personal essay, and part stand-up comedy routine … With great clarity of vision, Waters outlines his personal tastes as well as his rules to live by … Waters’ candid love of what some might call ‘sin’ also keeps the chapters of Mr. Know-It-All that essentially read like transcribed stand-up comedy routines from veering into Jerry Seinfeld territory.”

4. The Scandal of the Century and Other Writings by Gabriel García Márquez

“The articles and columns in The Scandal of the Century demonstrate that his forthright, lightly ironical voice just seemed to be there, right from the start … He’s among those rare great fiction writers whose ancillary work is almost always worth finding; he didn’t know how to phone anything in. He was a world-class observer … The humble García Márquez put it this way: ‘I am basically a journalist. All my life I have been a journalist. My books are the books of a journalist, even if it’s not so noticeable.’ He had a way of connecting the souls in all his writing, fiction and nonfiction, to the melancholy static of the universe.”

5. Out East: Memoir of a Montauk Summer by John Glynn

“Despite its publication date, the beach read label does not define John Glynn’s debut. Out East: Memoir of a Montauk Summer refashions the epic summer tale, dosed with lyrical brawn, grace, and ingenuity … chronicles one man’s coming out. Equally important, this memoir surveys one man’s maturation … beautiful, radical honesty … personifies summer magic … Summer or not, sharing a cool pop with John Glynn’s remarkable Out East will nudge you to believe in believing once again.”