The Impeachers: The Trial of Andrew Johnson and the Dream of a Just Nation 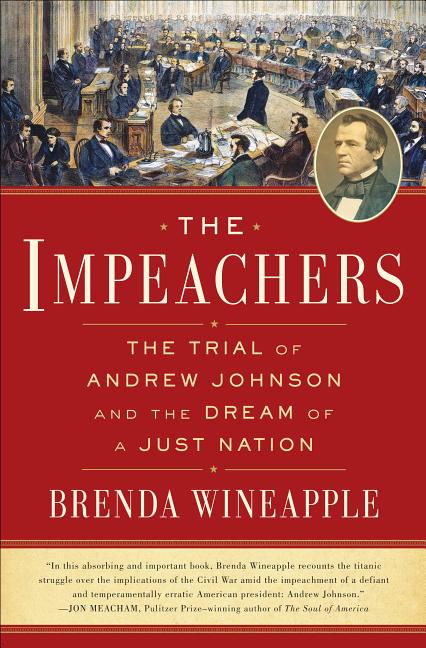 When Abraham Lincoln was assassinated and Vice-President Andrew Johnson became “the Accidental President,” it was a dangerous time in America. With the unchecked power of executive orders, Johnson ignored Congress, pardoned rebel leaders, promoted white supremacy, opposed civil rights, and called Reconstruction unnecessary. It fell to Congress to stop the American president who acted like a king.

What The Reviewers Say
Rave Jennifer Szalai,
The New York Times
Wineapple started to research her history of the country’s first impeachment trial six years ago; she briefly mentions Presidents Nixon and Clinton but not the current occupant of the White House. She doesn’t have to. The relevance of this riveting and absorbing book is clear enough, even if Wineapple’s approach is too literary and incisive to offer anything so obvious as a lesson ... Wineapple’s depiction of Johnson is so vivid and perceptive that his standoff with Congress arrives with a doomed inevitability ... Wineapple dips into the intrigue and the whiffs of corruption that surrounded the vote, including a cloak-and-dagger narrative that features incriminating telegrams. She brings the same feel for drama to the trial itself...
Read Full Review >>
Positive Michael O Donnell,
The Wall Street Journal
In The Impeachers: The Trial of Andrew Johnson and the Dream of a Just Nation, the historian Brenda Wineapple does not once mention current political debates about impeaching the president. But the timing of the book’s publication seems to offer a lesson: Before taking sides on whether Congress should impeach Donald Trump, consider what that process meant at another significant moment in our history ... This book’s strongest feature, Ms. Wineapple’s gift for portraiture, is on display as she sets out her cast of characters ... There is much to recommend Ms. Wineapple’s argument. 'The impeachers,' she writes, 'had reduced the seventeenth President to a shadow—a shadow President; that is, a President who did not cast a long shadow.' Scholars of Reconstruction might feel differently about the length of Johnson’s shadow, but his case does suggest that it is possible to constrain a president through impeachment without removing him.
Read Full Review >>
Rave Lance Weller,
New York Journal of Books
Brenda Wineapple’s wonderful The Impeachers: The Trial of Andrew Johnson and the Dream of a Just Nation is not a biography of Andrew Johnson, nor of his presidency. Rather, it is a book about the political turbulence of the fractious post-war reconstruction era as America tried to find better footing for a more just nation going forward. Wineapple’s clear, precise prose turns what could have been dry reading into a nearly edge-of-your seat narrative ... to fully understand and appreciate such fraught times, one must treat with a veritable horde of ancillary characters, and here The Impeachers shines ... Brenda Wineapple’s The Impeachers: The Trial of Andrew Johnson and the Dream of a Just Nation is not only an important book that reminds us of a historical moment we might have been in danger of forgetting, it also serves as a reminder that what was is never all that far from what is.
Read Full Review >>
See All Reviews >>
SIMILAR BOOKS
Biography

The Trials of Harry S. Truman: The Extraordinary…
Jeffrey Frank
Positive
What did you think of The Impeachers: The Trial of Andrew Johnson and the Dream of a Just Nation?
© LitHub | Privacy