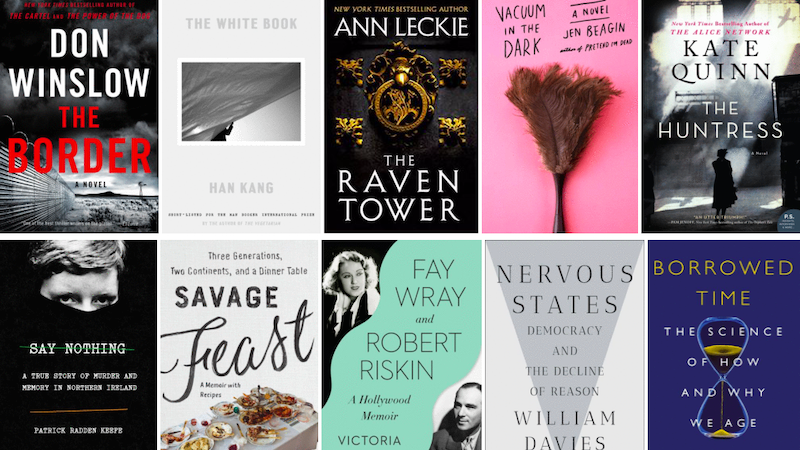 1. The Border by Don Winslow

“Of all the blows delivered by Don Winslow’s Cartel trilogy, none may be as devastating as the timing of The Border, its stunner of a conclusion … This is a book for dark, rudderless times, an immersion into fear and chaos. It conjures more lawlessness, dishonesty, conniving, brutality and power mania than both of the earlier books put together. Because of that chaos, it might have benefited from an indexed cast of characters. But Winslow can’t provide one. For one thing, it would be a spoiler. You just have to watch these miscreants as they drop … Winslow describes sting operations with immersive, heart-grabbing intensity. You don’t read these books; you live in them … Last and never least with Winslow: the matter of languages. He is fluent in many of them, and The Border once again shows off those talents.”

2. The White Book by Han Kang, Trans. by Deborah Smith

“… stunningly beautiful writing … The White Book isn’t likely to appeal to fans of the traditional novel, but will reward readers with a taste for more unconventional narratives … Han’s writing, and the translation by Deborah Smith, is so delicate and gorgeous, it seems a waste of time to try to pigeonhole it into any genre … The White Book is a novel that’s difficult to describe, but easy to love. It’s a delicate book, hard to know, impossible to pin down, but it’s filled with some of Han’s best writing to date. And it’s also one of the smartest reflections on what it means to remember those we’ve lost.”

Read an excerpt from The White Book here 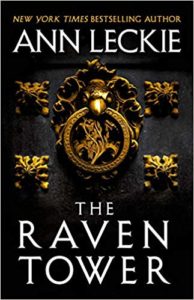 3. The Raven Tower by Ann Leckie

“It’s absolutely wonderful … it reminded me of nothing so much as Hamlet—if Hamlet were told from the point of view of Elsinore Castle addressing itself to a Horatio who mostly couldn’t hear it … The god’s voice is mesmerizing, tender and careful … I was struck by how deftly Leckie anchors the vastness of divinity to the intimacy of language and grammar, how the gods need to be taught to speak before they can be bargained with … it’s managed so tightly with reference to the narrating god’s perspective that it feels closer to the register of folk tale than epic, and is all the more riveting for that … The Raven Tower is also that rarest of creatures, a stand-alone fantasy novel that’s relatively short … In some ways the book has the affect of an elegant short story overlying the complications and concerns of a novel … It’s proof that a story can be entirely told instead of shown and still be utterly brilliant.”

4. Vacuum in the Dark by Jen Beagin

“Inventing situations and conversations that are off-the-charts in both weirdness and relatability, Beagin fashions an enchantingly intriguing main character in unfiltered, warmhearted Mona. This story of a woman embracing life’s what-ifs and her own darkness is a great read-alike for Melissa Broder’s The Pisces.

Read an excerpt from Vacuum in the Dark here

5. The Huntress by Kate Quinn

“Readers should expect to give up weekend plans once they start this novel. Using fictional characters in a story based on real-life efforts to find Nazi fugitives provides a new historical viewpoint. Quinn builds her characters through small details, allowing readers to develop opinions on who’s being honest and what their next action might be. The weaving of separate threads into a cohesive, satisfying end is subtle and skillful … A great choice for historical fiction fans, particularly of World War II–set novels, mystery readers, or anyone seeking well-crafted stories in which good triumphs over evil.”

1. Say Nothing: A True Story of Murder and Memory in Northern Ireland by Patrick Radden Keefe

“…an outsider’s perspective is what gives Say Nothing its exacting and terrifying lucidity … Keefe follows the McConville story, interviewing more than a hundred sources and digging deeper and deeper, to the point where he comes to his own conclusion about who murdered her. But the culpability of any one individual is only part of this meticulously reported book … Keefe’s narrative is an architectural feat, expertly constructed out of complex and contentious material, arranged and balanced just so … Keefe’s depiction of Price is so rounded and intimate you’ll be surprised to learn that he never spoke to her … This sensitive and judicious book raises some troubling, and perhaps unanswerable, questions.”

“[Fishman] engages with gendered migrant labor, offering nuanced portrayals of some of the dynamics between foreigners who share a Soviet past but belong to different cultures, waves, and types of migration … Boasting recipes for dishes that Fishman’s late grandmother and other relatives used to cook, the book gradually becomes a collection of Oksana’s kitchen wisdom … Fishman skillfully avoids portraying Oksana, who has played a critical role in his life, as a matronly, obliging caregiver who exists for the purpose of serving his family. He depicts her with obvious affection and sensitivity, but also with some distance, perhaps as an acknowledgment of his lack of access to the inner life of a female migrant.”

“A comprehensive work of the formation of Hollywood studios’ labor unions, politics, the post-WWII communism scares, personal and professional photos, the many movie posters from, as well as information about, every film both Fay Wray and Robert Riskin ever made, grace this memoir … an abundant account of what it’s like to be the daughter of Hollywood’s original power couple, and a must-read for fans and others with celebrity stars in their eyes.”

4. Nervous States: Democracy and the Decline of Reason by William Davies

“… wide-ranging yet brilliantly astute … Davies is a wild and surprising thinker who also happens to be an elegant writer — a wonderful and eminently readable combination. Nervous States covers 400 years of intellectual history, technological innovation and economic development, seamlessly weaving in such disparate intellects as Carl von Clausewitz, Friedrich von Hayek and Hannah Arendt. The unexpected affinities proposed in this book bring to mind the roving approach of Marshall McLuhan or Bruno Latour.”

5. Borrowed Time: The Science of How and Why We Age by Sue Armstrong

“Armstrong illuminatingly surveys research into aging’s biological mechanisms … she profiles a number of fascinating people, leavening the somewhat dense science with human interest, such as leading Alzheimer’s researchers Caleb Finch and Eric Davidson and their time spent collecting traditional music from Appalachia for the Library of Congress … Without suggesting death can actually be stopped, Armstrong’s work shows that quality of life before the inevitable might very well be significantly improved.”