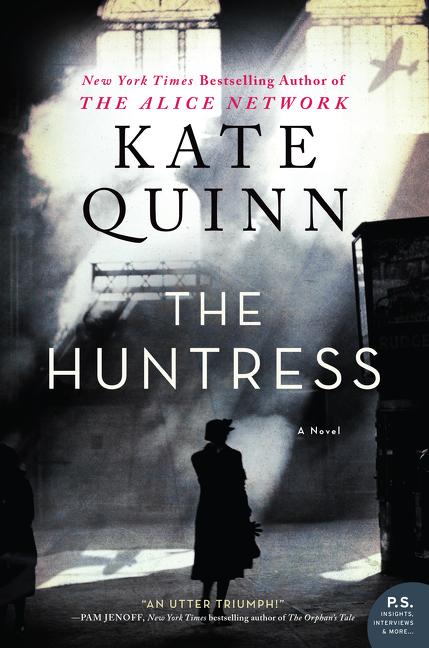 Stranded behind enemy lines, brave bomber pilot Nina Markova becomes the prey of a lethal Nazi murderess known as the Huntress and joins forces with a Nazi hunter and British war correspondent to find her before she finds them.

What The Reviewers Say
Rave Stacey Hayman,
Library Journal
Readers should expect to give up weekend plans once they start this novel. Using fictional characters in a story based on real-life efforts to find Nazi fugitives provides a new historical viewpoint. Quinn builds her characters through small details, allowing readers to develop opinions on who’s being honest and what their next action might be. The weaving of separate threads into a cohesive, satisfying end is subtle and skillful ... A great choice for historical fiction fans, particularly of World War II–set novels, mystery readers, or anyone seeking well-crafted stories in which good triumphs over evil.
Read Full Review >>
Positive Kristin Hannah,
The Washington Post
Quinn braids these story lines and characters together in a seamless narrative that builds toward a dramatic showdown ... The love story that emerges between Jordan and Tony is refreshing and straightforward and hints at the social changes in the years to come ... sure to be a hit with fans of commercial World War II fiction. Nina’s and Jordan’s narratives truly sing in this powerful novel about unusual women facing sometimes insurmountable odds with grace, grit, love and tenacity.
Read Full Review >>
Positive BETHANNE PATRICK,
NPR
Kate Quinn's The Huntress runs on a bit too long, but once you've read her Author's Note and understand that many of her characters are based on real people, real people who include the craven and the heroic, you'll understand why Quinn has stuffed her book with plot. You'll also see, I hope, that The Huntress reads like the best World War II fiction, stories in which that war means many people had to inhabit gray areas even after it was over ... So a bit long [the novel] may be. It's still engrossing, suspenseful, and authentic, a book to give you a new perspective on women, war, and the wheels of justice.
Read Full Review >>
See All Reviews >>
SIMILAR BOOKS
Fiction

Red Milk
Sjón, Tr. Victoria Cribb
Mixed
What did you think of The Huntress?
© LitHub | Privacy