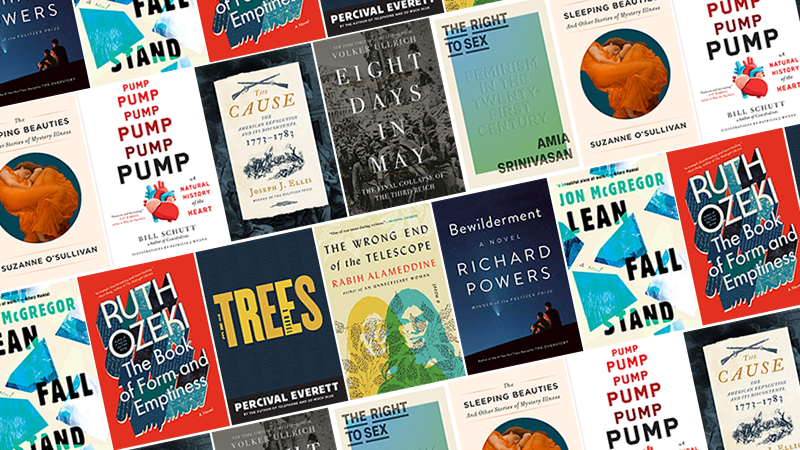 Richard Powers’ Bewilderment, Rabih Alameddine’s The Wrong End of the Telescope, Amia Srinivasan’s The Right to Sex, and Ruth Ozeki’s The Book of Form and Emptiness all feature among the best reviewed books of the week.

“The tenderness and delicacy with which the father-son relationship is depicted repeatedly brought to my mind Cormac McCarthy’s The Road, though it is a pre-apocalyptic planet on which Theo and Robin struggle to find fortitude and hope … Among the novel’s many virtues is the mood it radiates of sheer cosmic awe … Powers is coming to seem a gift to those of us who admire Stapledon’s genre but regret its indifference to human complexities. Impressively precise in its scientific conjectures, Bewilderment is no less rich or wise in its emotionality. Moreover, science fiction is not just a looming generic presence, but part of the novel’s narrative mechanism … channels both the cosmic sublime and that of the vast American outdoors, resting confidently in a lineage with Thoreau and Whitman, Dillard and Kerouac. It’s also a ghostly and affecting love story … Sorrowing awe is Bewilderment’s primary tone, and its many remarkable scenes are controlled with high novelistic intelligence. Robin is as compelling a fictional creation as I’ve encountered in some time—fierce, lovable and otherworldly. In dreaming him up, Powers was clearly working out a bold fictive question: what must it be like to father a Greta Thunberg?”

“… another McGregor novel that, beneath its serene surface, takes huge risks. There is, for example, the wilful front-loading of the action, with that stirring storm sequence giving way to Doc’s agonisingly slow recovery. McGregor has also chosen to have a main character unable to express himself for most of the book. Fortunately, it’s also another McGregor novel that triumphantly gets away with it … McGregor commits himself so wholeheartedly to the project of honouring minutiae (and has the literary talent to match) that the scene when post-stroke Doc first learns to touch his nose feels almost as dramatic as an Antarctic blizzard. For another, there’s the bracing awareness that the interconnectedness of human lives has its drawbacks as well as its much-trumpeted benefits … the novel’s final scenes—poised beautifully between sadness and hope—remind us that the three verbs of the title aren’t a simple progression. Rather, they’re a constantly repeated cycle as life sticks doggedly to the process of going on.”

3. The Book of Form and Emptiness by Ruth Ozeki
(Viking)

“… [an] ambitious and ingenious novel that presents a stinging exploration of grief, a reflection on our relationship to objects, a potent testament to the importance of reading, writing, and books … The most endearing aspect of Ozeki’s novel is its unabashed celebration of words, writing, and reading. A library is one of the novel’s most enchanted settings, at once a refuge from the cacophony of objects that overwhelms Benny at home and in school and a magical portal to a world of self-discovery and unexpected connections … The Book of Form and Emptiness is charming and warm, dynamic and filled with love, but over-full and a bit undisciplined. It meanders and digresses … But its heart, its ardent, beating heart, is huge. Ozeki’s playfulness and zaniness, her compassion and boundless curiosity, prevent the novel from ever feeling stiff or pretentious. Clever without being arch, metafictional without being arcane, dark without being nihilistic, The Book of Form and Emptiness is an exuberant delight.”

4. The Trees by Percival Everett
(Graywolf)

“The Trees is a wild book: a gory pulp revenge fantasy and a detective narrative that alternates between deadpan and slapstick modes of satire. It has all the right beats for the big screen, except that it’s too profane and obscene to be greenlit in Hollywood, even for the likes of Quentin Tarantino. His retribution epics offer an obvious point of comparison: The Treesis just as blood-soaked and just as hilarious as Inglourious Basterdsor Django Unchained, but it comes with more authentic historical weight for being set in a dreamlike counterpresent rather than a cartoonishly counterfactual past … For all the absurdism, there is of course a serious strand to The Trees an elegiac strain enters the novel … It’s tempting to call The Trees the ultimate novel of the Trump era. It is the rare book that sees the forty-fifth president less as a menace here than a nuisance, the Republicans as so many falling elderly dominoes, and their white-supremacist voters a decrepit network of armed bozos. In that way, it’s also tempting to read The Trees as a hopeful book, but such a reading might also be naive.”

5. The Wrong End of the Telescope by Rabih Alameddine
(Grove)

“The Wrong End of the Telescope…is as complex and multifaceted as its narrator. The story is a shape-shifting kaleidoscope, a collection of moments—funny, devastating, absurd—that bear witness to the violence of war and displacement without sensationalizing it … This is not a novel about transformation. Its strength lies in its slipperiness, its thoughtful engagement with the messy in-betweens and the harsh but revelatory realities of liminality … Mina, her fellow volunteers and the refugees they meet are all seeking something … The Wrong End of the Telescope is a gorgeously written, darkly funny and refreshingly queer witness to that seeking.”

1. The Right to Sex: Feminism in the Twenty-First Century by Amia Srinivasan
(FSG)

“[A] quietly dazzling new essay collection … This is, needless to say, fraught terrain, and Srinivasan treads it with determination and skill … These essays are works of both criticism and imagination. Srinivasan refuses to resort to straw men; she will lay out even the most specious argument clearly and carefully, demonstrating its emotional power, even if her ultimate intention is to dismantle it … This, then, is a book that explicitly addresses intersectionality, even if Srinivasan is dissatisfied with the common—and reductive—understanding of the term … Srinivasan has written a compassionate book. She has also written a challenging one … Srinivasan proposes the kind of education enacted in this brilliant, rigorous book. She coaxes our imaginations out of the well-worn grooves of the existing order.”

2. The Sleeping Beauties: And Other Stories of Mystery Illness by Suzanne O’Sullivan
(Pantheon)

Read an excerpt from The Sleeping Beauties here

“… at once poignant, surprising and sometimes horrifying … Unraveling the mystery behind such strange occurrences requires more than neurological expertise—it needs careful handling, a deep and empathic understanding of how society and culture, experience and expectation, work in tandem with our neural pathways and bodily responses to produce physiological disorders. Dr. O’Sullivan uncovers these complex mechanisms while painting a picture of psychosomatic suffering that removes its associated stigma, and she asks us to think about illness in new ways … Functional neurological and psychosomatic disorders are subject to fierce debate, and sufferers already raw from repeated denial of their experience are often the collateral damage. Dr. O’Sullivan wades into this conflict with extraordinary tact. What we underestimate, she tells us, is the power of the brain to disorder the body … offers a brilliant, nuanced and thoughtful look at the lived experience of illness while asking important questions about the relationship between body and mind. Dr. O’Sullivan’s rich prose weaves a tapestry as hauntingly beautiful as it is scientifically valid … At the heart of this tour de force is the question, deceptively simple but so difficult to answer: What do we mean by illness? Should medicine—biologically minded, diagnosis-privileging Western medicine—alone be allowed to decide?”

3. Pump: A Natural History of the Heart by Bill Schutt
(Algonquin)

Read an excerpt from Pump here

“… show-stopping … Schutt muses on various aspects of the heart, balancing scientific facts and light anecdotes … The author successfully pairs accessible science with strong storytelling, describing how Greek, Egyptian, and medieval scholars helped advance human knowledge (and at times misled it). The result is informative, playful, and impossible to put down.”

“Ellis dives into these evils and attendant blindness to what we see easily now. He is no apologist for the hypocrisy of Jefferson and interrogates every significant Framer’s culpability for the failures of the epoch. He does so, however, with awareness that they did not see or reason with the same powers we possess … He also renders judgments, many of them surprising, of the events of 1773 through 1783 … Most timely of all, though, is Ellis’s thorough treatment of both Washington and Jefferson’s views of, and shame for, the enslavement of people … Ellis is no apologist, but he is a chronicler of the entire revolution, its best aspirations, its worst contradictions and its ongoing dilemmas.”

5. Eight Days in May: The Final Collapse of the Third Reich by Volker Ullrich
(Liveright)

“… excellent and admirably succinct … A commendation too for the translator, Jefferson Chase, who also translated Ullrich’s recent two-part biography of Hitler. He really understands his author, from Ullrich’s use of irony to his occasionally more polemical moments. It still must be hard for a German scholar to be entirely dispassionate about what was done in (still, just) living memory.”