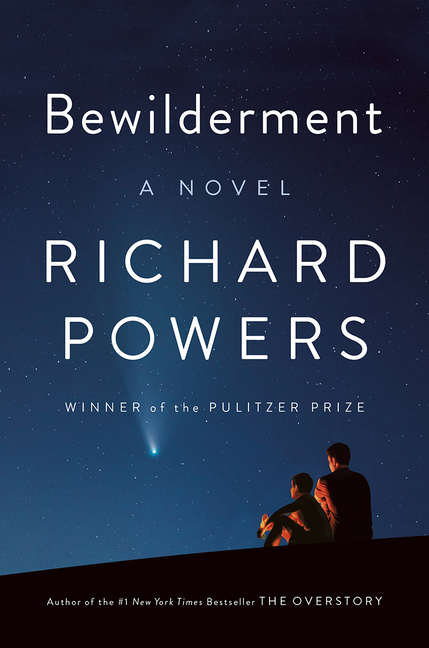 From the Pulitzer Prize-winning author of The Overstory. The astrobiologist Theo Byrne searches for life throughout the cosmos while single-handedly raising his unusual nine-year-old, Robin, following the death of his wife. His son grows troubled, but Theo hopes to keep him off psychoactive drugs. He learns of an experimental neurofeedback treatment to bolster Robin's emotional control, one that involves training the boy on the recorded patterns of his mother's brain.

What The Reviewers Say
Rave John Domini,
The Brooklyn Rail
In Bewilderment his mastery strikes a new vein, and while the takeaway by no means lacks in smarts or artistry, it makes a swift and easy read, glittering with timeless story elements; it raises goosebumps and breaks our hearts ... the dramatic elements all emerge in poignant two- and three-page snapshots, with a few chapters even briefer. Such quick turnover is a fresh move for this writer, and so too is playing a two-hander, largely the case here ... Bewilderment’s unearthly populations remind us eventually that, on this planet, humanity is the problem ... It’s a dark fable, all in all. There’s no denying the intellect at work ... Whether the subject’s harmless and invertebrate or venal and in the Senate, the author’s on top of it, knowing and pithy. Yet that’s not what’s most impressive about Bewilderment. Rather, it’s how every moment reveals the instincts of a master: an unerring touch with development and cutoff, with bearing down and easing off, and with where to put the punctuation ... I daresay Richard Powers has brought off something more than two exemplary and superb fictions of the climate crisis. He’s also unearthed and refurbished the timeless link between artist and shaman, a voice crying in the wilderness.
Read Full Review >>
Rave Rob Doyle,
The Guardian (UK)
The tenderness and delicacy with which the father-son relationship is depicted repeatedly brought to my mind Cormac McCarthy’s The Road, though it is a pre-apocalyptic planet on which Theo and Robin struggle to find fortitude and hope ... Among the novel’s many virtues is the mood it radiates of sheer cosmic awe ... Powers is coming to seem a gift to those of us who admire Stapledon’s genre but regret its indifference to human complexities. Impressively precise in its scientific conjectures, Bewilderment is no less rich or wise in its emotionality. Moreover, science fiction is not just a looming generic presence, but part of the novel’s narrative mechanism ... channels both the cosmic sublime and that of the vast American outdoors, resting confidently in a lineage with Thoreau and Whitman, Dillard and Kerouac. It’s also a ghostly and affecting love story ... Sorrowing awe is Bewilderment’s primary tone, and its many remarkable scenes are controlled with high novelistic intelligence. Robin is as compelling a fictional creation as I’ve encountered in some time – fierce, lovable and otherworldly. In dreaming him up, Powers was clearly working out a bold fictive question: what must it be like to father a Greta Thunberg?
Read Full Review >>
Positive Claire Messud,
Harpers
The story unfolds with an inevitability that is either pleasing or dismaying, depending on your feelings about plot ... Bewilderment feels, in certain respects, too familiar and tidy. Once the stakes are clear, the plot is obvious, and its mechanisms will be recognizable, along with the book’s themes, to readers of earlier Powers novels ... Characterization is not Powers’s forte ... But if Theo’s other relationships remain one-dimensional, the connection between father and son has greater density and texture, as does Robin’s urgent and unbridled passion for the natural world. Unabashedly issue-driven, Bewilderment may neither challenge nor surprise, but admirers of Powers’s ability to fold near-futuristic scientific facts into a meticulously constructed plot will nonetheless find satisfaction.
Read Full Review >>
See All Reviews >>
SIMILAR BOOKS
Fantasy

The Seven Moons of Maali Almeida
Shehan Karunatilaka
Positive
What did you think of Bewilderment?
© LitHub | Privacy