The Book of Form and Emptiness 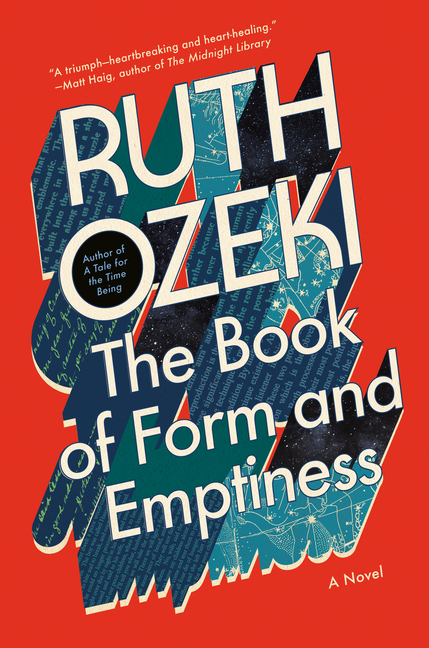 One year after the death of his beloved musician father, 13-year-old Benny Oh begins to hear voices. When his mother, Annabelle, develops a hoarding problem, the voices grow more clamorous. Soon the voices follow him outside the house, onto the street and at school, driving him at last to seek refuge in the silence of a large public library, where he meets his very own Book—a talking thing—who narrates Benny's life and teaches him to listen to the things that truly matter.

What The Reviewers Say
Rave Priscilla Gilman,
The Boston Globe
... [an] ambitious and ingenious novel that presents a stinging exploration of grief, a reflection on our relationship to objects, a potent testament to the importance of reading, writing, and books ... The most endearing aspect of Ozeki’s novel is its unabashed celebration of words, writing, and reading. A library is one of the novel’s most enchanted settings, at once a refuge from the cacophony of objects that overwhelms Benny at home and in school and a magical portal to a world of self-discovery and unexpected connections ... The Book of Form and Emptiness is charming and warm, dynamic and filled with love, but over-full and a bit undisciplined. It meanders and digresses ... But its heart, its ardent, beating heart, is huge. Ozeki’s playfulness and zaniness, her compassion and boundless curiosity, prevent the novel from ever feeling stiff or pretentious. Clever without being arch, metafictional without being arcane, dark without being nihilistic, The Book of Form and Emptiness is an exuberant delight.
Read Full Review >>
Rave Mary Ann Gwinn,
Los Angeles Times
A vivid story of fraught adolescence, big ideas and humanity’s tenuous hold on a suffering planet ... This is a novel of big ideas. Zen Buddhist precepts guide the meditations on our relationships with objects, and at times the narrative threatens to buckle under the weight of its conceptual burdens. Some characters feel flat, marshaled forth to advance a theory rather than embody a real person ... Ozeki, an imaginative writer with a subversive sense of humor, has an acute grasp of young people’s contemporary dilemmas ... The Book of Form and Emptiness overflows with love and a lot of sadness ... Ozeki doesn’t offer anything as complete as salvation but something more real: a profound understanding of the human condition and a gift for turning it into literature.
Read Full Review >>
Positive Judith Shulevitz,
The New York Times Book Review
Adept at magical realist fiction, Ozeki ensouls the world. Everything in her universe, down to a windowpane and a widget, has a psyche and a certain amount of agency and can communicate, if only with the few human beings granted the power to understand them ... stands out among the story’s other sentient entities in that it has extraordinary powers of self-reflection and self-replication. This is a Book, as well as a book. It serves as both narrator and instructor. It tells the story; it tries to teach the hero to tell his own story; and it struggles to get him and us to understand the true meaning of Books: that they are the maps of Life ... There’s powerful magic here. I’d call it Zen if I knew what I was talking about. In any case, Ozeki does not grab at the wind. She is unusually patient with her characters, even the rebarbative ones, and she is able to record the subtle peculiarities of other classes of being that more overeager writers would probably miss. By juxtaposing a Benny trying to push the clamor of things out of his head and an Annabelle who binge-eats them, as it were, Ozeki gives us a metaphor for our own very American consumption disorder, our love-hate relationship with the stuff we overproduce and can’t let go of ... the novel is overstuffed ... The more interesting aggravation, however, is the novel’s framing device — that is to say, the Book as both narrator and character. The conceit is grating. The Book has a bad habit of Book-splaining ... offers an unflinching and in many respects magnificent tour of that dark side. If the Book feels the need to natter on about courage and whatnot, I guess I’ll just make like Benny and try to ignore it.
Read Full Review >>
See All Reviews >>
SIMILAR BOOKS
Coming Soon

Victory City
Salman Rushdie
Rave
What did you think of The Book of Form and Emptiness?
© LitHub | Privacy