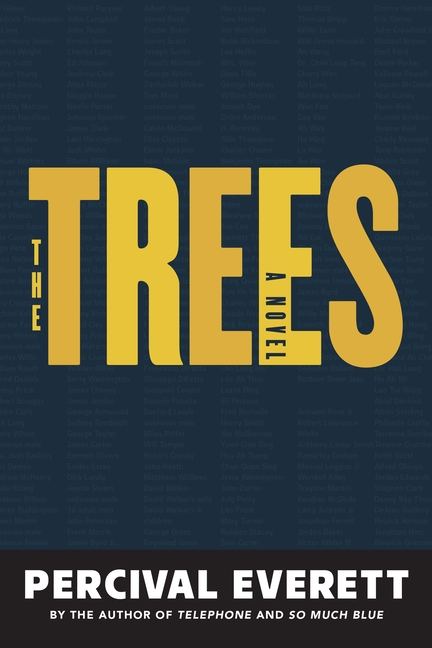 The author of Telephone returns with a surreal exploration of the legacy of lynching in the United States: After a series of brutal murders in a rural Mississippi town, investigators arrive and discover a large number of similar cases that all have roots in the past—as the wave of murders spreads beyond Mississippi and across the country.

What The Reviewers Say
Rave CAROLE V. BELL,
NPR
At a certain point, dark social satire bleeds into horror. That can be powerful, but it can also very easily miss its target. Percival Everett's new novel The Trees hits just the right mark. It's a racial allegory grounded in history, shrouded in mystery, and dripping with blood. An incendiary device you don't want to put down ... No work of art will ever right justice denied, but The Trees does a spectacular job of resurrection ... It's a novel of compelling contrasts: frank, pitiless prose leavened by dark humor; a setting that is simultaneously familiar and strange; a genre-defying, masterful blend of the sacred and the profane. The language is self-consciously old-fashioned in a modern, stylized way ... But dark wordplay and local color are ultimately a sideshow to the bigger project. Despite the absurdist touches, the novel is deadly serious and reverential in its explication of the legacy of lynching in all forms and places and devotes time and space to honoring the dead. Whether by coincidence or intent, The Trees is set in 2018, the same year that The National Memorial for Peace and Justice in Alabama opened its doors. With a highwire combination of whodunnit, horror, humor and razor blade sharp insight The Trees is a fitting tribute of a novel: Hard to put down and impossible to forget.
Read Full Review >>
Rave Amy Rowland,
The New York Times
Humor may seem ill placed in a novel about lynching, but Everett has mastered the movement between unspeakable terror and knockout comedy, so the reader covers a laughing mouth with one hand and stifles a gasp with the other.
Read Full Review >>
Rave LORRAINE BERRY,
Los Angeles Times
... a radical genre game both hilarious and deadly serious ... As the murders escalate and make national news, Everett summons horror tropes in service to notions of what justice might look like. And by visiting violence on the descendants of Till’s killers, he examines the notion of collective guilt — the way it festers in the absence of reckoning or reconciliation ... Everett’s enormous talent for wordplay — the kind that provokes laughter and the kind that gut-punches — is at its peak. He leans on the language of outrage and hyperbole to provoke reactions a history book could never elicit ... If white readers who live outside the South believe themselves to be 'in' on Everett’s joke, they too are in for a surprise. The rash of revenge he unleashes captures those responsible for horrors far beyond the Jim Crow South, eventually implicating virtually all of us ... Everett makes clear that the sins of the fathers fall upon all white Americans — anyone who has benefited from terror, intimidation or systematic repression, regardless of whether they held the rope. He has made some audacious leaps over nearly 40 years of writing, but The Trees may be his most audacious. He makes a revenge fantasy into a comic horror masterpiece. He turns narrative stakes into moral stakes and raises them sky-high. Readers will laugh until it hurts.
Read Full Review >>
See All Reviews >>
SIMILAR BOOKS
Fantasy

Win Me Something
Kyle Lucia Wu
Rave
What did you think of The Trees?
© LitHub | Privacy