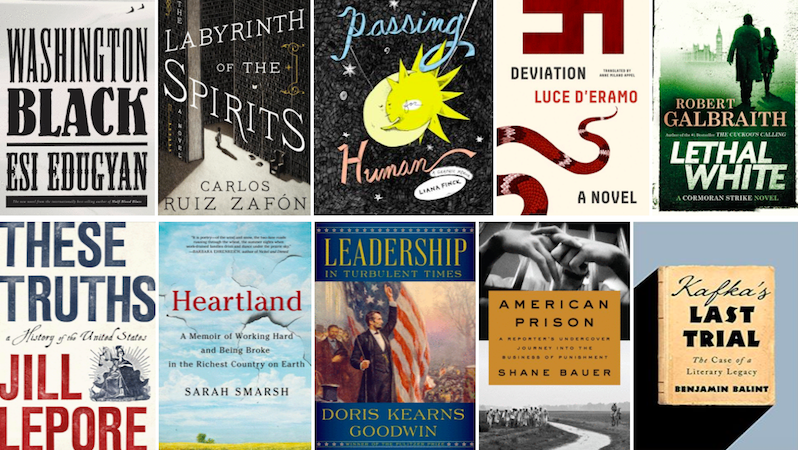 “The beauty here lies in Edugyan’s language, which is precise, vivid, always concerned with wordcraft and captivating for it. Images of slave life are the most powerful of the book, and Big Kit is a formidable creation—a quietly seething figure rather like the strong, suffering women from Marlon James’s The Book of Night Women, and again, one wishes that Edugyan had not decided to abandon her so early on. But the story is broader and more ambitious in its scope … His story becomes increasingly mythic, heading beyond freedom, toward empowerment. It’s not what readers who are wedded to realism might want, but Edugyan’s fiction always stays strong, beautiful and beguiling.” 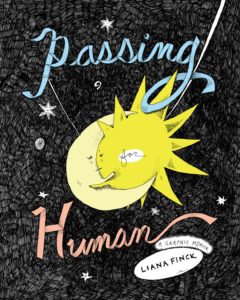 2. Passing For Human by Liana Finck

“…[a] tender, complicated narrative … If reading it makes you think long and hard about neurological difference and the isolation it may involve, it also reminds you that we all feel weird at times – as if we are, as she puts it, only passing for human … This book comes with a lot of whimsy: shadows that walk and talk; a god that is a queen on a cloud … Her biblical-mythological interludes don’t always work. Somehow, though, this doesn’t matter – and not only because it’s impossible not to admire both her ambition and the beautiful economy of her line drawings … There is a resonant truth at the heart of this book, and it soars above everything else.”

3. The Labyrinth of the Spirits by Carlos Ruiz Zafon, Trans. by Lucia Graves

“The plot is exquisitely intricate, like an elaborate steampunk timepiece. Alicia, a fragile but ferociously formidable, vampire-like seductress, is unforgettable. The pacing is exceptional, with its incessant, rolling waves of tension. Even the dialogue is remarkably sharp and fresh … The Labyrinth of the Spiritsis a masterpiece more than worthy of sharing a shelf with its bestselling predecessors … For those who have read Zafón’s earlier novels, some loose ends are finally resolved. Readers’ one regret will be that Labyrinth is the last in this ingenious cycle.”

“Luce D’Eramo’s extraordinary novel Deviation…is, as its title may imply, a rejection of the idea that literary form can be neatly separated from psychic and political life. Autobiographical without ever being simply or transparently so, the story is so eventful that it initially threatens to make the style of its telling invisible—the content upstaging the form—when in fact the drama and difficulty of that telling will become central to the book.”

“Rowling’s wizardry as a writer is on fulsome display in Lethal White…a behemoth of a novel that flies by in a flash. This is a crime series deeply rooted in the real world, where brutality and ugliness are leavened by the oh-so-human flaws and virtues of Galbraith’s irresistible hero and heroine … Galbraith can, of course, construct a bang-up mystery plot. But the real addictive tension in this series comes from the push-pull (unspoken) attraction between the gruff Strike, who lost a leg serving in Afghanistan, and Robin … Galbraith dials back the Stieg Larsson-like depths of depravity we got in (the excellent) Evil, which is a relief. Perhaps less is at stake, mystery-wise, in Lethal White, but Rowling’s signature strengths—her indelible characters, the Dickensian detail and inventiveness (the names alone!), her dry British humor and her empathy toward matters of the heart—have room to bloom.”

1. These Truths by Jill Lepore

“Ranging from European settlement to Trumpian tweets, These Truths is a perceptive and necessary contribution to understanding the American condition of late. History in Lepore’s nimble hands is more than the telling of tales. It is probed and analyzed and dislodged from the past, presented as a force that resonates in the present … She presents an honest history, one that searches for evidence and answers … Some historians shy from presenting the American experience as the story of progress. Lepore seems not so bashful … It captures the fullness of the past, where hope rises out of despair, renewal out of destruction, and forward momentum out of setbacks. Lepore points vividly to the true source of American exceptionalism, people who step from the pages and reaffirm your love of country.”

“We all have our best registers, our natural octaves, and Smarsh’s is the grounded, oral, anecdotal range of her hardscrabble Kansas kinfolk. Fortunately, the tales of their adventures and misadventures make up the majority of her elucidating first book … The memoir flickers to life … Smarsh is an invaluable guide to flyover country, worth 20 abstract-noun-espousing op-ed columnists … A deeply humane memoir with crackles of clarifying insight, Heartland is one of a growing number of important works.”

“…her approach here uncovers new insights and understanding—both for readers and for herself … Readers will share that sense of discovery … With Leadership, Pulitzer Prize winner Goodwin cements her reputation as a scholar with a remarkable ability to bring the complexities of our past to life for everyday readers. It’s a welcome gift indeed.”

“American Prison is both the remarkable story of a journalist who spent four months working as a corrections officer, and a horrifying exposé of how prisoners were treated by a corporation that profited from them … Bauer’s insights into what some call the ‘prison-industrial complex’ are fascinating, and the history he provides offers crucial context into his time working at a CCA facility. It’s Bauer’s investigative chops, though, that make American Prison so essential … The stories he tells are deeply sad and consistently infuriating … American Prison is an enraging, necessary look at the private prison system, and a convincing clarion call for prison reform.” 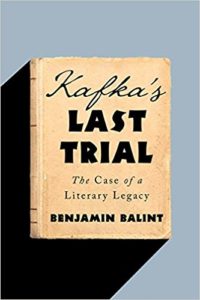 “It’s a tale pitting two Goliaths against one octogenarian David, untangled in exacting, riveting detail by Israeli author Benjamin Balint in his new book, Kafka’s Last Trial: The Case of a Literary Legacy. The story Balint tells is one of an interminable trial between doomed parties, in which physical struggles morph into questions about identity, self, and existential belonging. If only there were some author whose name is now an adjective used to describe exactly such stories!”