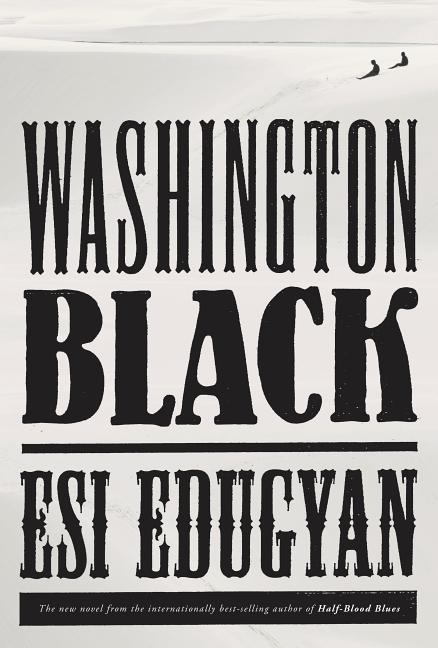 In the latest novel by the author of Half-Blood Blues 19th century slave Washington Black leaves the Barbados plantation where he was born to be the manservant of Christopher Wilde, a naturalist and abolitionist who gives Wash a life of dignity and meaning, introducing him to flying machines. But when a bounty is placed on Wash’s head following a murder, Wilde travels with Wash across continents to save him.

What The Reviewers Say
Rave Colm Toibin,
The New York Times Book Review
The reader can almost see what is coming ... The Canadian novelist Esi Edugyan has other ideas, however. She is determined that the fate of Washington Black will not be dictated by history, that the novel instead will give him permission to soar above his circumstances ... In this portrait of the artist as a young man, Edugyan demands that the reader take the mixtures in Washington seriously ... Edugyan is willing to take great risks to release the reader from any easy or predictable interpretations of Washington. She is not afraid to allow him to have thoughts and knowledge that seem oddly beyond his command. That is part of his ambiguous power in the book ... There are moments when the writing soars, when Washington’s experience of the natural world is rendered in a prose that openly, almost exultantly, strives to evoke beauty ... Edugyan is careful, nonetheless, that her flying machine of a novel not fly too freely into the upper air ... His prose can be vivid, sometimes fervid, but it can also be measured ... What Edugyan has done in Washington Black is to complicate the historical narrative by focusing on one unique and self-led figure.
Read Full Review >>
Rave Afrifa Akbar,
The Observer
The beauty here lies in Edugyan’s language, which is precise, vivid, always concerned with wordcraft and captivating for it. Images of slave life are the most powerful of the book, and Big Kit is a formidable creation—a quietly seething figure rather like the strong, suffering women from Marlon James’s The Book of Night Women, and again, one wishes that Edugyan had not decided to abandon her so early on. But the story is broader and more ambitious in its scope ... His story becomes increasingly mythic, heading beyond freedom, toward empowerment. It’s not what readers who are wedded to realism might want, but Edugyan’s fiction always stays strong, beautiful and beguiling.
Read Full Review >>
Mixed Sam Sacks,
The Wall Street Journal
These deep dives into the turmoil of Wash’s soul are bracing but brief, quickly abandoned for the next fantastical plot turn. Ms. Edugyan is such a fluent, intelligent, natural writer that there’s little doubt she could succeed producing popular page-turners. But I’d miss the texture and emotional intensity she sometimes reaches here (and which were on fuller display in her gritty Nazi-era novel Half-Blood Blues). The story’s ambiguous conclusion suggests her uncertainty about which road to take. Wash has jeopardized everything to reunite with Titch, and a powerful confrontation about their shared history seems promised—and then isn’t delivered. The abrupt, unresolved ending leaves Wash, like the reader, hanging in midair.
Read Full Review >>
See All Reviews >>
SIMILAR BOOKS
Fiction