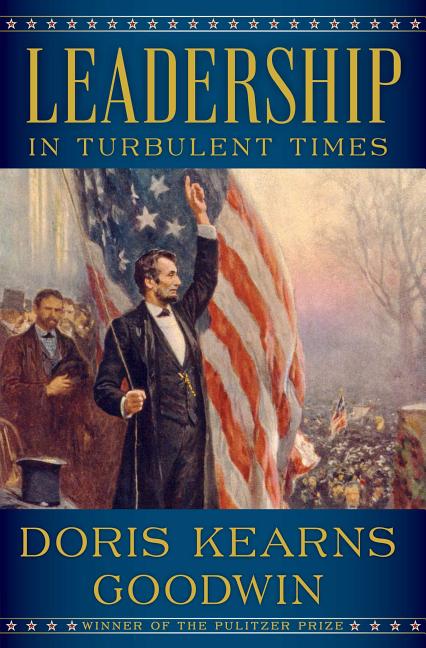 From the Pulitzer Prize-winning presidential historian and author of Team of Rivals, an exploration of the early development, growth, and exercise of leadership, focusing on Abraham Lincoln, Theodore Roosevelt, Franklin D. Roosevelt, and Lyndon B. Johnson.

What The Reviewers Say
Positive David Greenberg,
The New York Times Book Review
Written in the companionable prose that makes Goodwin’s books surefire best sellers, Leadership: In Turbulent Times recounts the lives of Abraham Lincoln, Theodore Roosevelt, Franklin Roosevelt and Lyndon Johnson ... Readers of presidential biography will know these stories, but newcomers may not — and in any case Goodwin is telling them not for their own sake but to establish certain key ingredients of skillful democratic leadership ... It is therefore to Goodwin’s credit that she teases out the variety and peculiarities among the four presidents. Despite the overarching steeled-by-adversity template into which she wedges these stories, each retains its own intrinsic drama ... Leadership: In Turbulent Times is most absorbing when Goodwin resists the urge to glean pat lessons or rules from the past and allows herself to savor the stubborn singularity of each moment or personality ... In contrast, when Goodwin gets to her section on the four presidents’ emergency leadership, which should be the book’s pièce de résistance, she succumbs to the leadership genre’s vocabulary of self-help bromides and bullet-point banalities ... Still, it would be unfair to deny the value in thinking collectively about these four presidents, especially in these dark times.
Read Full Review >>
Positive Tim Kaine,
The Washington Post
Her title echoing the truth of the maxim attributed to the Latin writer Publilius Syrus—'anyone can hold the helm when the sea is calm'— Goodwin circles back through her understanding of the four presidents in Leadership: In Turbulent Times, trying to extract the basic lessons that enabled each to deal with major crises in their personal lives and in the life of their country. No one is better suited than Goodwin to make the effort, and yet her book makes plain how hard it is to capture the essence of leadership, at least when the question is approached head-on ... The individual stories of each president and his struggles and accomplishments command the reader’s interest. And Goodwin’s selection of leadership lessons from each president makes the book a series of case studies that you can easily see being assigned by leadership teachers. But the distilled nature of Leadership also obscures one of Goodwin’s tremendous strengths—her ability to situate a leader within a set of relationships ... Leadership: In Turbulent Times also reminds us of what American greatness means ... A book like Leadership: In Turbulent Times should help us raise our expectations of our national leaders, our country and ourselves.
Read Full Review >>
Positive Danny Heitman,
The Christian Science Monitor
Leadership in Turbulent Times doesn’t strike a partisan tone. In fact, Goodwin doesn’t mention Trump at all, although the book’s reference to 'turbulent times' will be understood as an oblique commentary on recent headlines ... Would Goodwin favor a modern-day president ignoring the judicial branch to get his way? It’s an issue she doesn’t fully address, which underscores an occasional problem with Leadership in Turbulent Times. It sometimes lacks the intellectual ambition that distinguished Goodwin’s earlier books, reading like previous research for her biographies that’s been repackaged to accommodate the present fad in leadership tutorials ... Even so, the book offers much to like.
Read Full Review >>
See All Reviews >>
SIMILAR BOOKS
Biography

The Trials of Harry S. Truman: The Extraordinary…
Jeffrey Frank
Positive
What did you think of Leadership: In Turbulent Times?
© LitHub | Privacy