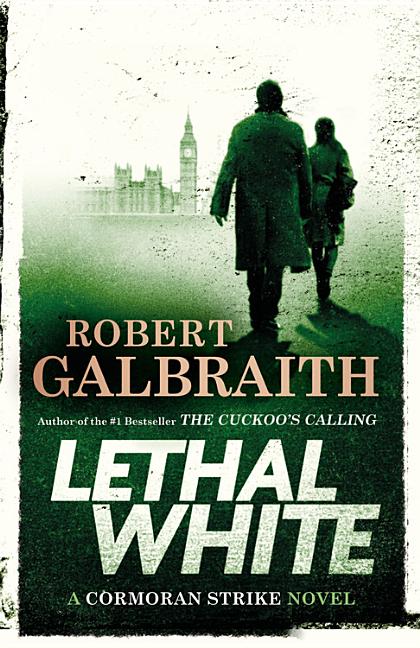 In the fourth installment of the Cormoran Strike crime series—written by J.K. Rowling under her nom de plume—Strike and his partner Robin set off on a twisting trail that leads them through the backstreets of London, into a secretive inner sanctum within Parliament, and to a beautiful but sinister manor house deep in the countryside.

What The Reviewers Say
Rave Jocelyn McClurg,
USA Today
Rowling’s wizardry as a writer is on fulsome display in Lethal White...a behemoth of a novel that flies by in a flash. This is a crime series deeply rooted in the real world, where brutality and ugliness are leavened by the oh-so-human flaws and virtues of Galbraith’s irresistible hero and heroine ... Galbraith can, of course, construct a bang-up mystery plot. But the real addictive tension in this series comes from the push-pull (unspoken) attraction between the gruff Strike, who lost a leg serving in Afghanistan, and Robin ... Galbraith dials back the Stieg Larsson-like depths of depravity we got in (the excellent) Evil, which is a relief. Perhaps less is at stake, mystery-wise, in Lethal White, but Rowling’s signature strengths—her indelible characters, the Dickensian detail and inventiveness (the names alone!), her dry British humor and her empathy toward matters of the heart—have room to bloom.
Read Full Review >>
Mixed Sarah Lyall,
The New York Times
Lethal White, the fourth Cormoran Strike mystery, is a big, stuffed-to-the-brim, complicated bouillabaisse of a book, not least because of the busy inner lives of its protagonists ... Because Rowling is so straightforwardly liberal, it’s a pleasant surprise to find that Galbraith is an equal-opportunity satirist. He is just as happy to send up the self-righteous anti-capitalists of the left as the clueless twits of the right ... With a mystery this big and baggy, it can be hard to keep track of who has done what and why ... Lethal White is an old-fashioned novel, by which I mean that it is 650 pages long and that few of its protagonists’ activities, emotions and motivations are left to the reader’s imagination ... all of this is exhaustively described and occasionally exhausting to hear ... At times you might feel as you did when reading the Harry Potter books, particularly later in the series, when they got longer and looser. You love the plot, and you love being in the company of the characters ... At the same time, you long for the existence of a sharp garden implement ... a pair of pruning shears.
Read Full Review >>
Positive Maddy Foley,
Bustle
Even if the world is the seedy underbelly of contemporary London and not magical Hogwarts, cracking the cover of a Galbraith novel is like stepping through a portal. You're immersed, all at once ... It's bleak, and Strike Series fans need to trust that the plot will warm up after the initial icy start ... While the HP [Harry Potter] series had its dark (very dark) moments, Cormoran's line of work puts a spotlight on pedestrian violence—The ugly side of humanity is often on display, desperate and raw. And it can be difficult, sometimes, to find any semblance of saving grace. It's there, but it's buried ... Despite Lethal White's slower moments, Galbraith does have an excellent sense of the reader's attention span. Whenever the plot threatens to slow to a dangerously plodding pace, Galbraith throws in a clue, opens up a door. And he draws you back in.
Read Full Review >>
See All Reviews >>
SIMILAR BOOKS
Literary

Please See Us
Caitlin Mullen
Rave
What did you think of Lethal White?
© LitHub | Privacy