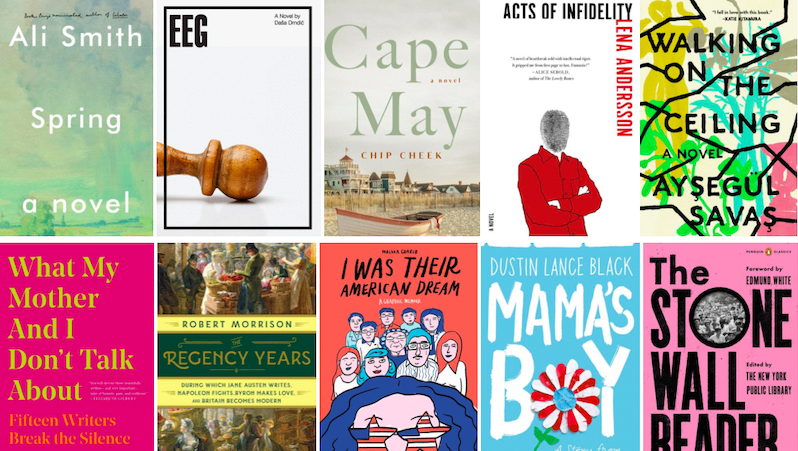 Ali Smith's latest, a novel of doomed relationships, and a memoir from Dustin Lance Black

“Smith is increasingly recognising the narrative possibilities of this new type of storytelling, finding deeper and more compelling ways of getting under the skin of her times … While reading Spring, I became suddenly aware of the extraordinary meta-novel—the year—that the quartet will form once it’s complete, and how thrilling and important that book will be … Now that we are past the halfway mark it’s possible to perceive the shape of the whole, to recognise quite how dazzling the interplay of ideas and images between the four books will be … There’s so much more to say about this luminous, generous, hope-filled novel … all of this rich material feels amplified by the echoes and resonances that thrum between Spring and its predecessors … She’s lighting us a path out of the nightmarish now.”

Read Lori Feathers on the oeuvre of Ali Smith here

“As its title may suggest, the novel is structured somewhat like a scan of [Ban’s] brain activity, which is to say that it’s associative, looping, digressive: thrilling and deliberately infuriating in equal measure. By the same token, it’s also, like several of Drndić’s other books, an experiment in how much of the horrific twentieth century one work of fiction can swallow without breaking apart … the force of Ban’s anger and the leaping, unexpected connections he draws are exhilarating, restoring the reality of all those cutoff lives, along with the reader’s capacity to take in the scale of complicity involved—from the CIA’s harboring of Nazi war criminals to the tawdry record of Croat nationalism—and to register history’s shocks anew. EEG is a monument against the common notion that political convictions soften with age, as you learn to let the world off the hook. Neither Drndić nor her books did any such thing.”

3. Cape May by Chip Cheek

“The worry from the start of Chip Cheek’s debut Cape May is that the story is going to be an exercise in hindsight moralizing … But a few things help Mr. Cheek dodge the shoals of cliché. First is his beguiling, undemonstrative writing style. The parties are raucous affairs but Mr. Cheek portrays them from a calm remove … He wields the same observational control over the sex scenes, which are plentiful and, against the odds, extremely well done. It’s the spell of sexual desire rather than the era’s social mores that interests Mr. Cheek … A dozy, luxurious sense of enchantment comes over the story … Cape May does something better than critique or satirize: It seduces.”

4. Acts of Infidelity by Lena Andersson, Trans. by Saskia Vogel

“… another scalpel-sharp look at a doomed relationship … absurd and also painfully familiar to anyone who’s ever been there … one of the key joys (if something so painful can be termed a joy) of this novel—its detailed dissection of a relationship’s dynamics and power-plays … I am trying to think why these novels have connected so hard with women that I know, and I think that it’s Andersson’s treating of these intense emotional states with gravity and worth—emotional states that are so often gendered, or dismissed flippantly … The narration throughout is cool and impartial, the prose razor-sharp and precise. Every other sentence begs to be underlined, reveals an uncomfortable nugget of truth … When a man performs longing, in literature or otherwise, it is seen as somehow noble. When a woman performs longing she’s too often seen as hysterical, unstable, the shrew of Olof’s imagination. But in Acts of Infidelity, Andersson is not afraid to delve properly into the histrionic depths of a crush.”

Read an excerpt from Acts of Infidelity here

5. Walking on the Ceiling by Aysegül Savas

“[A] delicate, melancholy debut novel … Her loneliness radiates like heat from the pages of this book … Savas’s novel unfolds in a series of 72 short, non-chronological chapters, pieces of a mosaic that demand careful attention as you attempt to fit them together … spare, disarmingly simple prose … She writes with both sensuality and coolness, as if determined to find a rational explanation for the irrationality of existence, and for the narrator’s opaque understanding of herself … Savas doesn’t write much about modern-day Istanbul, but menace lurks around the corner of her prose … By the end, it feels as if she is coming close to matching the words to the reality, if that’s even possible.”

1. What My Mother and I Don’t Talk About: Fifteen Writers Break the Silence, Ed. by Michele Filgate

“This generous, mature recognition of the ways in which so many of us overestimate the capacities of mothers—who were people with lives and loves and wants and hurts and complexities before they ever gave birth—colors many of the stunning essays in this anthology … Though no two essays feel even remotely alike, there are recurring themes … While each essay is its own beast, containing its own wild, wonderful, woeful, willful or warring mother figure, the collection as a whole holds together precisely because there is something recognizable in each and every piece … each and every one comes to recognize this fact: that every mother is human first, mother second.”

2. The Regency Years by Robert Morrison

“He casts his net widely among economic, social, cultural, and political topics, describing how, then as now, the events of the day inspired widespread concern and debate about concentration of political power and the complex impacts of economic change. He also identifies other patterns in Regency society that echo our own. Understandings of sexuality, sexual expression, and relationships were evolving, including the presence of recognizably modern gay and lesbian identities. Pioneers of civil disobedience foreshadowed the nonviolent resistance of the twentieth century, and aided by new printing technologies, celebrity culture was beginning to emerge. With such touchstones, Morrison gathers a broad range of topics into a strong, cohesive, and fast-moving narrative. An excellent introduction for readers new to the period and a fresh take for Regency enthusiasts.”

Read an excerpt from The Regency Years here

3. I Was Their American Dream: A Graphic Memoir by Malaka Gharib

“In this time when immigration is such a hot topic, Malaka Gharib puts an engaging human face on the issue … The push and pull first generation kids feel is portrayed with humor and love, especially humor … Gharib pokes fun of all of the cultures she lives in, able to see each of them with an outsider’s wry eye, while appreciating them with an insider’s close experience … The question of ‘What are you?’ has never been answered with so much charm.”

4. Mama’s Boy: A Story From Our Americas by Dustin Lance Black

“…thought-provoking … a heartfelt tribute to Anne, his courageously inspiring yet deeply religious and politically conservative mother … Black provides a wholly engrossing account of how a mother and son evolved beyond their potentially divisive religious and political beliefs to uncover a source of strength and unity through their enduring bond. A terrifically moving memoir of the myriad complexities of family dynamics.”

5. The Stonewall Reader, Ed. by The New York Public Library

“As Jason Baumann explains in his introduction, Stonewall ‘has become the stuff of queer legend and debate.’ The Stonewall Reader beautifully dives into that legend and debate, and its strength lies in its queer messiness … His carefully curated volume also dispels the myth of white leadership surrounding the events at Stonewall, itself an important contribution … Baumann accomplishes this by not only diversifying the contributors to the volume–which include figures like Marsha P. Johnson, Audre Lorde, and Sylvia Rivera alongside Samuel Delaney and Mark Segal–but also by deploying a useful teleological organization to the essays, accounts, and interviews … The book wonderfully reflects how revolutionary moments rarely get portrayed accurately through single voices, and Baumann has produced here a history worth revisiting again and again.”