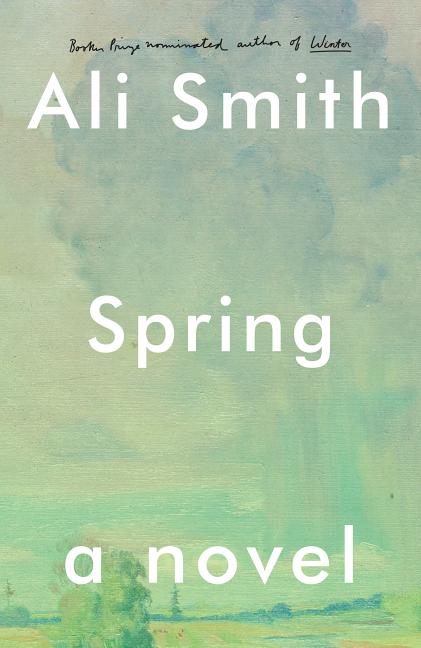 What unites Katherine Mansfield, Charlie Chaplin, Shakespeare, Rilke, Beethoven, Brexit, the present, the past, the north, the south, the east, the west, a man mourning lost times, a woman trapped in modern times? Spring. The great connective. With an eye to the migrancy of story over time and riffing on Pericles, Ali Smith tells the tale of an impossible time.

What The Reviewers Say
Rave Rebecca Makkai,
The New York Times Book Review
...as raw as this morning’s Twitter rant and as lasting and important as — and I say this neither lightly nor randomly — Ulysses ... Smith has always been sharp and brutal, and often funny, in her Kafkaesque moments — fruitless passport or loan applications, attempts to unsubscribe from emails — but when she skewers the inner workings of a bureaucracy that detains asylum seekers indefinitely, the tone rises correspondingly to the desperate laughter of gallows humor, the deadpan of the dead at heart ... Smith never physically describes the young Florence ... This shouldn’t work — what author gets away with a fundamentally foggy main character? — yet it does. Florence’s vagueness feels authentic and fundamental, self-protective, not as if Smith is using her as a symbol but (wonderfully) as if Florence is using us ... Spring slants more postmodern than its two predecessors ... Smith offers an excuse for those sections: They’ve been written in a notebook by the precocious Florence.It’s a shift in the novel’s framing that doesn’t quite work, and not just because 12 seems too young to have written these passages ... The overall work is still a marvelously manic patchwork ... That Smith manages to show things falling apart as well as some small center holding is to her great credit ... the defining, if baffling, literature of an indefinable and baffling era.
Read Full Review >>
Rave Ellen Akins,
The Washington Post
Open Spring, and words erupt off the page, a wide-ranging rant of demands and wants, as if the tantrum of our political moment has found a voice. But then! Another voice rises, all-powerful Mother Earth promising, in spite of humanity’s puny mewling and intransigence, to once more bring green spring out of the deadly mess we’ve made. This is Ali Smith, the crazy-brilliant Scottish writer ... Chockfull of Smith’s joyous language, wordplay and aphorisms, snippets of pop songs and folktales, classical allusions and appreciations of artists from Rilke and Mansfield to the extraordinary cloud- and mountain-conjuring Tacita Dean, Spring is as fierce in its conviction and sure in its connections as that first, earthly voice that, after its vision of devastation, issues this promise: 'I’ll be the reason your own sap’s reviving. I’ll mainline the light to your veins.'
Read Full Review >>
Rave Heller McAlpin,
NPR
I love the brassy blast of [Smith's] outrage at the world's injustices and the drumbeat of her passion for the arts. This Scottish writer gravitates naturally to outsiders and really understands loss and grief. She takes a genuine interest in old people and what we can learn from them, but also sees hope for the future in smart young people. I love her clever wordplay, her insistence on the life-enhancing possibilities of love and decency, and her ability to compose artful literature that sings of both humanity's heart and heartbreaks. All of these qualities are on abundant display in Spring, the third volume of Smith's seasonal quartet ... Spring uncoils strikingly, like a vernal fern. It feels fresh even though Smith returns to so many of her familiar themes: the bleak contemporary political landscape, loss of a soul mate, fractured families, nature's seasonal clockwork, and references to a real artist (Tacita Dean this time) and a Shakespeare play ... Postcards crop up in this book like signposts, no mere ephemera. The initially puzzling inclusion of off-putting anti-immigrant rants will become clear with time. About such bloviating, Smith reminds us: 'Hot air rises and can not just carry us but help us rise above.' So can her novels.
Read Full Review >>
See All Reviews >>
SIMILAR BOOKS
Fiction

We Measure the Earth with Our Bodies
Tsering Yangzom Lama
Positive
What did you think of Spring?
© LitHub | Privacy