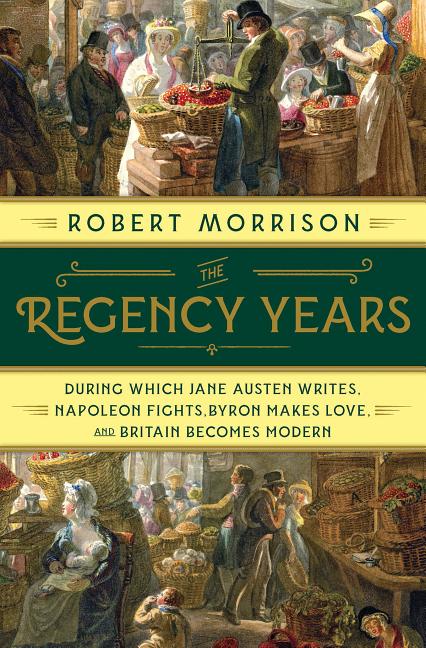 The Regency (1811–1820) began when the profligate Prince of Wales―the future king George IV―replaced his insane father, George III, as Britain’s ruler. This is a history of an overlooked era that brought the modern world of art, culture, and science decisively into view.

What The Reviewers Say
Positive Ruth Scurr,
The Washington Post
The historical mirror that The Regency Years holds up to contemporary Britain is disturbing ... [The Prince Regent] ruled over a period of extraordinary creativity and it is that progressive cultural legacy that Mr. Morrison commends to contemporary Britain and the rest of the world.
Read Full Review >>
Rave Michael Dirda,
The Washington Post
Morrison probes the era’s passion for gambling, horse-racing, boxing and opium ... He thrillingly describes the Battle of Waterloo, tracks the War of 1812 in North America and offers a global tour d’horizon of Britain’s colonies in Canada, India and Australia. But he doesn’t neglect the arts and sciences, devoting several pages to the painters John Constable and J.M.W. Turner, the chemist Sir Humphry Davy, the visionary computer-scientist Charles Babbage and the engineer who pioneered the steam locomotive, George Stephenson. Not least, he regularly turns for insight to the era’s two most famous novels: Jane Austen’s Pride and Prejudice and Mary Shelley’s Frankenstein. Given such plenty, what more could one ask from a work of cultural history?
Read Full Review >>
Positive Sara Jorgensen,
Booklist
Morrison gathers a broad range of topics into a strong, cohesive, and fast-moving narrative. An excellent introduction for readers new to the period and a fresh take for Regency enthusiasts.
Read Full Review >>
See All Reviews >>
What did you think of The Regency Years: During Which Jane Austen Writes, Napoleon Fights, Byron Makes Love, and Britain Becomes Modern?
© LitHub | Privacy