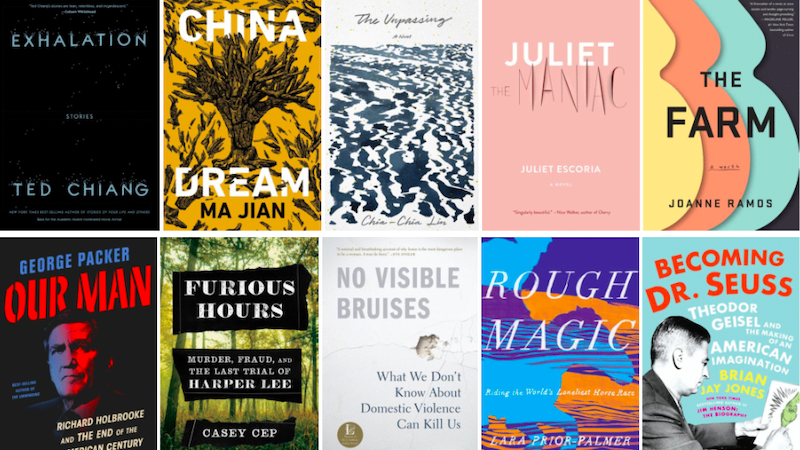 “…a biting and humane novel of stunning concision … Bleakly funny, incisive, stinging and—in its most destabilising passages—gut-wrenching, China Dream, brilliantly translated by Flora Drew, is set at a time when reality and dystopia have begun to bleed into one another … Ma has a marksman’s eye for the contradictions of his country and his generation, and the responsibilities and buried dreams they carry. His perceptiveness, combined with a genius for capturing people who come from all classes, occupations, backgrounds and beliefs; for identifying the fallibility, comedy and despair of living in absurd times, has allowed him to compassionately detail China’s complex inner lives.”

3. The Unpassing by Chia-Chia Lin

“A deep melancholy persists in the grim, breathtakingly beautiful debut novel by Chia-Chia Lin … riveting … Lin excels when she gets small, with finely observed renderings of the family’s surroundings … The way this chilling, captivating book concludes will delight as much as it challenges, offering as it does a blend of escape, tragedy, triumph, loss and what we’ve expected all along.”

Read an excerpt from The Unpassing here

4. Juliet the Maniac by Juliet Escoria

“Narrating between the experiences of Juliet’s past self and the hindsight of her future self, Escoria weaves a story that isn’t just relatable to those with mental illness, but really illustrates what it’s like for those readers who don’t have it … Escoria’s writing traces the scars in this book with a gentle fingertip, capturing the moments with a dream-like clarity, watching them unfold, knowing what the consequences will be … The juxtaposition of smiling elite alongside the ‘Palms Trash’ (as her group of friends comes to be known) is both striking and refreshing.”

Read an excerpt from Juliet the Maniac here

5. The Farm by Joanne Ramos

“Ramos’ debut is so engaging that the reader might not fully understand the depths she probes until the book is done. Throughout, questions of money, ethics, privilege, and ambition arise as each character makes compromises—or straight-up lies to herself. Jane’s sweetness gives the reader someone to root for, but each character’s complexity will give book groups plenty to discuss. An alarmingly realistic look at the power of wealth and access buoyed by clear, compelling storytelling and appealing, if not always likable, characters.”

1. Our Man: Richard Holbrooke and the End of the American Century by George Packer

“.. by the end of the second page, maybe the third, you will be hooked. You’ll come to understand that the author, New Yorker writer George Packer, understood Holbrooke, understood power, understood America in its eclipse at the end of the 20th century and into the 21st … you’ll realize that Holbrooke, who died nine years ago, was central to what was central to much of postwar American life, and that in a terrifying way his story is America’s story … there seldom has been a book quite like this — sweeping and sentimental, beguiling and brutal, catty and critical, much like the man himself … [an] undercurrent of poignancy that runs throughout … this book screams a lesson about the perils of substituting ambition for the true distilled idealism of youth. It is a treatise of loyalties abandoned, chances squandered, promise wasted.” 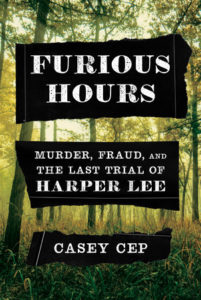 “…what I didn’t see coming was the emotional response I would have as I blazed through the last 20 pages of the book—yet there I was, weeping … Each section of the book could stand on its own, making it feel, in a way, like three books in one. But, ultimately, Furious Hours delivers a gripping, incredibly well-written portrait of not only Harper Lee, but also of mid-20th century Alabama—and a still-unanswered set of crimes to rival the serial killers made infamous in the same time period.”

3. No Visible Bruises: What We Don’t Know about Domestic Violence Can Kill Us by Rachel Louise Snyder

“A powerful exploration of the sinister, insidious nature of domestic violence in America … Intriguingly, Snyder probes the chilling territory of the perpetrators, sketching them from the inside out … the author contributes her own profound introspection on the nature of empathy and relatability … Bracing and gut-wrenching, with slivers of hope throughout, this is exemplary, moving reportage on an important subject that often remains in the dark due to shame and/or fear.”

Read an excerpt from No Visible Bruises here

“… a stunning debut … In witty, open and revealing prose, Prior-Palmer details a slew of obstacles—from searing heat and pelting rain to food poisoning, uncooperative ponies and, most importantly, a lack of experience and preparation … Her tale could be pulled from the pages of a Hollywood script, with its sweeping, scenic descriptions of the Mongolian steppe and the allies and fierce competitors who emerge among the unique cast of characters … a true page-turner, told in gorgeous, descriptive prose that readers will tear through like the ponies racing across the plain.”

5. Becoming Dr. Seuss: Theodor Geisel and the Making of an American Imagination by Brian Jay Jones

“Nuanced, profoundly human and painstakingly researched, this 496-page biography is perhaps the most complete, multidimensional look at the life of one of the most beloved authors and illustrators of our time … While it is a standard biography in general terms, Jones goes above and beyond to contextualize Geisel in the larger picture at every moment of his life. This makes Becoming Dr. Seuss a fascinating read that discusses the origin of the humorous, simple rhymes, bizarre creatures, and magic that characterized Geisel’s books while also showing the author’s more radical side as an unemployed wanderer who abandoned his doctoral studies, a successful advertising man, and a political cartoonist … Jones engages with Geisel’s darker side fearlessly … gives readers a comprehensive view of a complex, multifaceted creator who became a giant.”