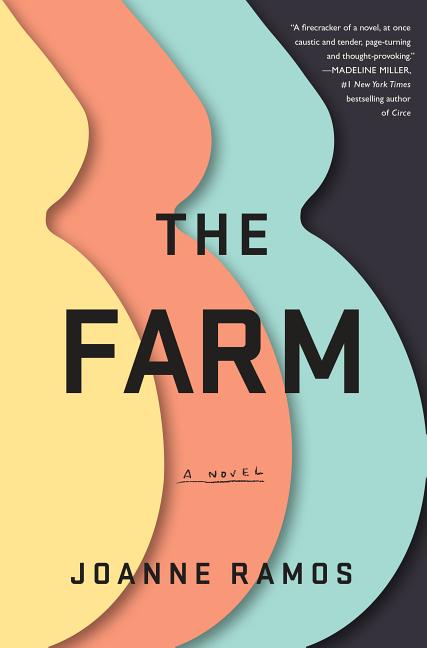 Nestled in New York’s Hudson Valley is a luxury retreat boasting every amenity—and all of it for free. The catch? For nine months, you cannot leave the grounds, your movements are monitored, and you are cut off from your former life while you dedicate yourself to the task of producing the perfect baby. For someone else.

What The Reviewers Say
Rave Melissa Katsoulis,
The Times (UK)
It’s got book-club hit and bestseller written all over it, even before you clock its media-friendly author ... it’s the very nowness that makes The Farm such a haunting read ... Ramos has crafted a real page-turner that combines all the hottest issues of the day: inequality, race and women’s battle to reclaim their bodies from commodification by big business, with the eternal questions of how much we can sacrifice before losing ourselves completely. She is eloquent on the little intimacies of gestating a baby and the upstairs-downstairs dramas between rich white ladies who feel guilty about everything and their nannies who must debase themselves without making their bosses feel sorry for them. The result is an entertaining novel that is also a serious warning.
Read Full Review >>
Positive Dina Nayeri,
The Guardian
Joanne Ramos’s thrilling but flawed debut novel is a colonisation story set inside Golden Oaks, a baby farm in Massachusetts ... The Farm reads not so much as dystopia, but as a plausible next venture for a capitalist ruling class that has grudgingly opened its doors to women and must now contend with the problem of fertility and motherhood ... The most beautifully realised character is Evelyn, an elderly Filipino baby nurse and caterer whose complex motives give her the kind of impossible moral struggles that immigrants actually face ... Evelyn’s community of Filipino women is richly rendered and engrossing ... She has the acute gaze of the immigrant girl made good. Her book is a necessary one – we need a mass-market novel that shows the impact of colonisation, with flawed white people failing to save the day. But The Farm has a problematic ending ... The Farm is a great read, but storytelling comes with responsibilities, especially in such times.
Read Full Review >>
Mixed Jen McDonald,
The New York Times Book Review
The Farm may be an 'issue' book, but it wears the mantle lightly. It’s a breezy novel full of types (the Shark, the Dreamer, the Rebel, the Saint), and veers, not always successfully, from earnestness into satire. That shift in voice can obscure the novel’s intent — though to be fair, ambiguity may be the point ... Ramos’s characters articulate both sides of the surrogacy argument ... Some of its sharpest scenes are those skewering the rich ... Yet Ramos also lingers indulgently over the trappings of the wealthy, to the point where reading this novel felt a bit like watching several hours of reality-TV luxury porn. So The Farm isn’t not a critique, but it’s also not an indictment ... The novel’s too-neat ending won’t provide satisfying answers. But the stage is set for lively book chat.
Read Full Review >>
See All Reviews >>
SIMILAR BOOKS
Fantasy

When We Were Young
Richard Roper
Positive
What did you think of The Farm?
© LitHub | Privacy