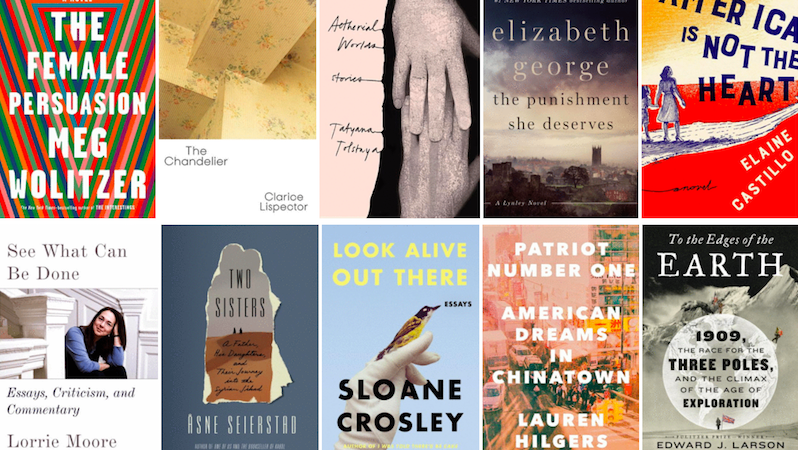 The Best Reviewed Fiction and Nonfiction Titles of the Week

1. The Female Persuasion by Meg Wolitzer

“…the novel eschews a simplistic, idealized view of mentorship and influence, or of friendship. Elements of complication — competitiveness, resentment, selfishness, rationalization and moral compromise — run side by side with nobler instincts, handled in a way that doesn’t make the characters less likable, only more real … The Female Persuasion is the best kind of social novel — a brilliant book about relationships set against a backdrop of principles, movements and change.”

“If the pages of The Chandelier are so thickly lacquered with description, streams of adjectives and looping repetition, it’s because Lispector is flexing, coming into her power. She’s playing, she’s practicing. These pages are full of finger exercises, arpeggios of thought and perception … The Chandelier might best be understood as a bridge in Lispector’s work. But even so, it conveys a special charge, an undeniable quantity of genius.”

Read an excerpt from The Chandelier here

“…a collection of dark, funny folkloric tales. Each is masterful in its ability to keep apace with the world’s banalities and frustrations while moving seamlessly into the surreal … Tolstaya’s conscious aversion to sentimentality makes you feel as if you alone are catching a glimpse into the secretly vulnerable and deeply captivating souls of her characters.”

4. The Punishment She Deserves by Elizabeth George

“[T]his portrait of Ardery in extremis is perhaps George’s finest, and with it she expertly tightens her novel’s inexorable grip … The Punishment She Deserves, for example, may have one subplot too many, but the novel’s elegant structure is airtight, and no character, however tangential, seems extraneous … As always, George’s cunning revelations are deftly staged.”

5. America Is Not The Heart by Elaine Castillo

“Though Hero’s new life as an immigrant adjusting to America is complicated, the mundane routines and soulful cast of characters she encounters allow her many-times-broken heart to expand and eventually love. Castillo’s direct and urgent voice propels the sprawling epic with impressive skill. This unforgettable family saga is not to be missed.”

1. See What Can Be Done by Lorrie Moore

“As Moore reviews books, TV, politics and her own life, she slams into her subjects, lands on her stories. She cuts into the souls of other artists and makes noise. She fearlessly tells the truth about hard things … Moore approaches writing as a way of ruthlessly reaching toward the reader. You hope that when you reach back you won’t pull away with bloody fingers.”

Read an excerpt from See What Can Be Done here

“Two Sisters is nearly impossible to stop reading. She’s a master at pacing, and writes with an admirable clarity that manages to be empathetic without ever descending into mawkishness. And her translator, Seán Kinsella, does a wonderful job making the book accessible to English-language readers … Two Sisters is a fascinating, heartbreaking, and, finally, urgently necessary book.”

3. Look Alive Out There by Sloane Crosley

“By pursuing her tales of woe beyond riffs and rants, Crosley elevates these foibles above the anecdotal … Sanctimony is toxic to personal essays, and Crosley wields its antidote, self-deprecation, with the skill of a practiced EMT … She has that rare ability to treat scrapes with sardonic humor and inject serious subjects with levity and hijinks with real feeling — a sort of unlicensed nurse to our souls.”

4. Patriot Number One by Lauren Hilgers

“Hilgers has written a penetrating profile of a man and much more besides: an indelible portrait of his wife and their marriage; a canny depiction of Flushing, Queens; a lucid anatomy of Chinese politics and America’s immigration system. Such a comprehensive project could have easily sprawled across a book twice as long, but Patriot Number One stays close to the people it follows, in a narrative as evocative and engrossing as a novel.”

5. The Edges of the Earth by Edward J. Larson

“Larson is a talented storyteller with a dry sense of humor, and the nicest compliment that I can pay him is that he does full justice to his three protagonists’ remarkable bravery, resourcefulness, accomplishments—and flaws … Mr. Larson’s scholarship indicates that both men also lusted after fame and fortune. Cynics could conclude that Peary and Shackleton were hypocrites. And yet, my own cynicism notwithstanding, I can’t help thinking that these two adventurers (even mendacious Peary) wouldn’t, couldn’t, have endured the hellish ordeals they did if they hadn’t possessed a modicum of idealistic patriotism.”