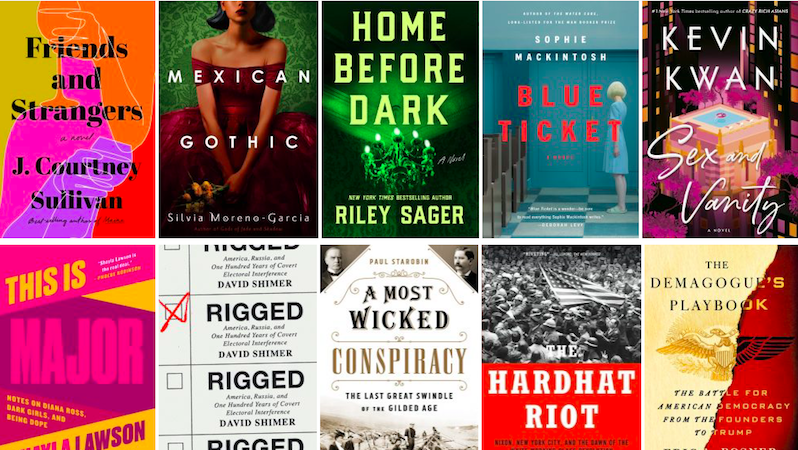 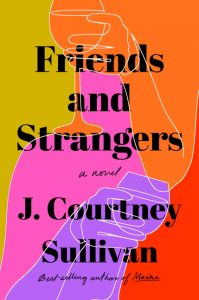 “Friends and Strangers captures the conflicting emotions of parenthood with palpable sympathy … We’ve seen this scenario played for satire and terror, but Sullivan approaches her story with deep-seated compassion for both sides … With its carefully drawn scenes of home life and its focus on the trials of motherhood and infertility, Friends and Strangers will be shelved as domestic fiction. But it’s as much a story about money and politics. Everywhere in the background we can detect the wreckage of an economy no longer capable of sustaining middle-class life … But if Sullivan’s vision of this country sounds cynical, her faith in individuals remains profound. There’s a rare degree of emotional maturity in Friends and Strangers, a willingness to resist demonizing any of the players, a commitment to exploring the demands of family with the deliberate care such complex relations require. Once again, Sullivan has shown herself to be one of the wisest and least pretentious chroniclers of modern life. Every hard-won insight here is offered up with such casual grace.” 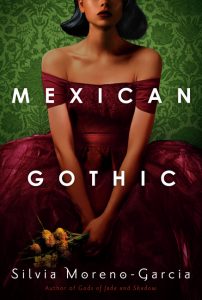 “High Place is an ominous presence, and Moreno-Garcia uses its grim atmosphere to great effect … The descriptions of her hallucinations are hypnotically poetic … drips with a miasma of dread for these captive women, especially after we learn what this strange family has in store for them. But this is a novel about powerful women … It’s as if a supernatural power compels us to turn the pages of the gripping Mexican Gothic. The true identity of the Doyles and the fate of these women is an intoxicating mystery that allows us, for a little while, to forget the horror story taking place in the real world during the summer of covid-19.” 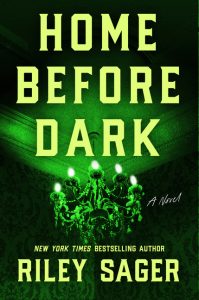 3. Home Before Dark by Riley Sager

“… no straightforward novel … Sager’s novel is packed with the expected horror-trope-tinged suspense, literary jump-scares and more than one twist, but its best moments are the quiet ones exploring the history of the house, comparing the truths Maggie learns with what her father wrote and coming to terms with what it all means anyway for Maggie and her family … starts more slowly than Sager’s previous thrillers, but all the best ghost stories do.” 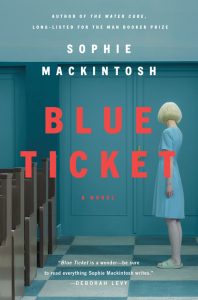 “The author’s style is spare but thoughtful. Every detail enhances the plot and the atmosphere at once … For some authors the plot would now be thick enough. Let the quartet eke out survival as their bellies grow and see what happens. But Mackintosh understands that while there may be just two ticket colors in this society, there can be more than two sides to every story … Mackintosh’s description of Calla’s childbirth will resonate with those who have been through it, and properly terrify those who haven’t … What may be most memorable about Blue Ticket lies in the concept of women and agency. Calla’s society allows women so little choice about procreation, yet expects all women to have leisure time … Sophie Mackintosh lays bare many of the fears and realities that face any society’s women as they contemplate when their choices begin, and where they might end.” 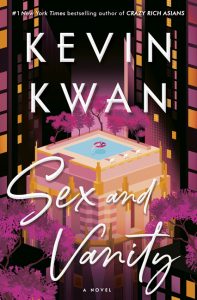 5. Sex and Vanity by Kevin Kwan

“There are few authors who could pull off wealth porn in the current cultural moment—perhaps only one. Kwan, author of the insanely popular Crazy Rich Asians trilogy, again manages to enchant, though this is crazy and rich without the Asian locales, food, and other cultural details. While the locations of this book—the isle of Capri and the Hamptons—are certainly glamorous and full of rich people, they are no Singapore or Hong Kong. Kwan overcomes that with his irresistibly knowing humor and delightful central characters … Kwan manages to take a few swipes against snobbery and racism. Nice … This is the only way you’re getting to Capri this year. Why resist?” 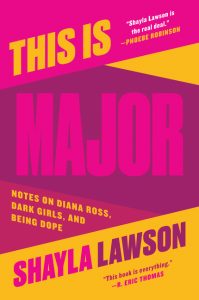 1. This is Major: Notes on Diana Ross, Dark Girls, and Being Dope by Shayla Lawson

“Shayla Lawson, the director of creative writing at Amherst College and author of three poetry collections, seeks to look beyond the notion that Black girls are magic. This Is Major: Notes on Diana Ross, Dark Girls, and Being Dope not only spotlights the nuances of Black womanhood but also rejects the claim that their power is rooted in an inherently superhuman or supernatural disposition … Whether she’s discussing the politics of Twitter popularity, the pitfalls of interracial dating, the ever-shifting cultural definition of ‘black’ or the reality of gentrification, Lawson is a master of her craft. Her keen poetic sensibilities sharpen topics that may seem amorphous or expansive. She doesn’t present herself as the representative of all Black girls, but she seamlessly blends deeply personal memories with overarching moments in history and pop culture. The result is a sense of familiarity between the writer and the Black women who pick up this book … Lawson’s voice can be smooth like honey or cut to the quick. This essay collection is a necessary study of self-enlightenment and the unique power of Black girls: We contain multitudes.” 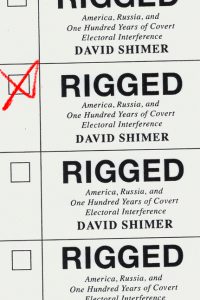 “Shimer provides a subtle and evenhanded portrait of a White House in an unprecedented crisis … With the pacing of a thriller and the insight of a superb work of history, the book paints an understandable yet dismaying picture of a missed opportunity … To contextualize the mind-sets of Obama and Putin and their secret warriors in the fall of 2016, Shimer skillfully reconstructs the history of how both Washington and Moscow got into the business of election interference in the first place. While not breaking much new archival ground, he provides a powerful primer, at the same time avoiding the reflexive ‘whataboutism’ that mars so much analysis … On the eve of our national referendum on Trump and Trumpism, this book is nothing less than essential reading.” 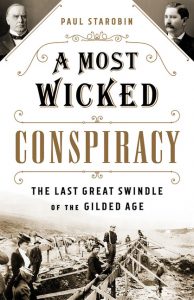 3. A Most Wicked Conspiracy: The Last Great Swindle of the Gilded Age by Paul Starobin

“If these shenanigans sound familiar, it is one of the reasons this book is important. If we do not study and remember our history, we are doomed to repeat it. What McKenzie did goes beyond mere avarice. To sate his greed, he willingly subverted the American system. This book also serves as a hopeful reminder that ultimately there are people who will stand up for what is right. As a matter of personal preference, I try to avoid books that begin with a listing of characters—and there are more than 50 characters noted here. But I needn’t have worried. The writing is fluid, the structure is logical without unnecessary diversions. Also, the events in Nome provided the final impetus for the 17th Amendment, the direct election of U.S. senators, and at least a partial decrease in the powers of the bosses.” 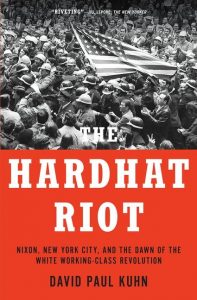 4. The Hardhat Riot: Nixon, New York City, and the Dawn of the White Working-Class Revolution by David Paul Kuhn

“The Hardhat Riot…vividly evokes an especially ugly moment half a century ago, when the misbegotten Vietnam War and a malformed notion of patriotism combined volatilely … Kuhn ably and amply documents the cowardly beating of women, the gratuitous cold-cocking of men and the storming of a shakily protected City Hall, where the mayor’s people, to the hard hats’ rage, had lowered the flag in honor of the Kent State dead … Kuhn favors straightforward journalistic prose, with few grand flourishes. In setting scenes, he tends toward a staccato, some of it overdone … Hardly every antiwar protester merits his go-to characterization of them as potty-mouthed hippies.” 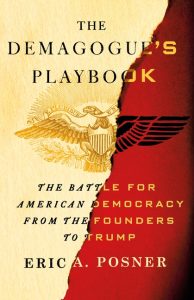 5. The Demagogue’s Playbook: The Battle for American Democracy from the Founders to Trump by Eric A. Posner

“A great virtue of Posner’s conceptual scheme is that it allows him to focus on those aspects of Trump’s presidency that are of lasting significance. Instead of condemning demagogues for any phrase or policy he happens to dislike, he zeros in on their dangerous habit of positing a conflict between the people and the very institutions that have historically enabled them to exert their power … Still, a distinct drawback of the book is that it becomes a repetitive hunt for populists and demagogues. And while Posner’s sketches of major political figures from Thomas Jefferson to Franklin Roosevelt are often interesting, they do not add to the vast stock of knowledge we owe to their many biographers … This could be more easily forgiven if Posner gave us a fresh perspective on our contemporary predicament. But when he finally reaches the present, his view of the Trump presidency turns out to be disappointingly conventional…It is difficult to argue with Posner’s conclusion. But it’s one that has long been shared by a vast swath of the American public.”