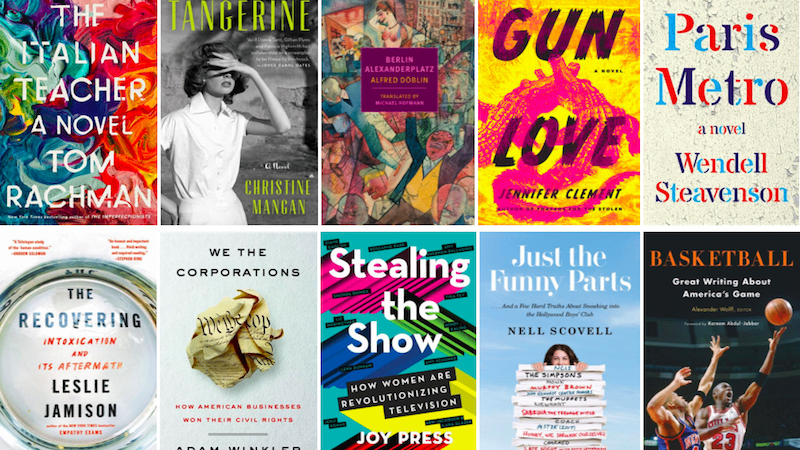 1. The Italian Teacher by Tom Rachman

“He has a deft way of describing atrocious behavior without damning his characters, without suggestions that they’re entirely circumscribed by their worst acts. His comedy is tempered by a kind of a gentleness that’s a salve in these mean times … At several points, in fact, I was reminded of Peter Carey’s brilliant little novel Theft (2006), about a complicated trio of art forgers. But Rachman brings his own, warmer touch to the crime, transforming it into a surprising act of defiance that’s both deliciously ironic and deeply affectionate.”

“I’ve never started a review with the words Oh, my God, but they perfectly encapsulate Christine Mangan’s unbelievably tense, incredibly smart debut novel about identity, obsession and secrets … Mangan full-speeds up to her shocking finale, twisting the plot with reveals you never see coming. Best of all, when the book — and the body count — are finished, it’s impossible not to keep thinking about these sharply drawn characters and imagining what might happen next.”

“The sheer brio of Döblin’s prose, together with the unstoppable forward momentum of his narrative, makes all this squalor not only bearable but riveting. The story comes at you in a flood of words: Each character’s stream of consciousness is just one tributary in an enormous torrent that also includes newspaper headlines, advertising jingles, weather reports, political slogans, and seemingly every other kind of verbal and aural flotsam that would have been bobbing around Berlin in the years 1927–28, when the novel is set … That it all flows as naturally as it does in English is a testament to Michael Hofmann’s resourcefulness.” 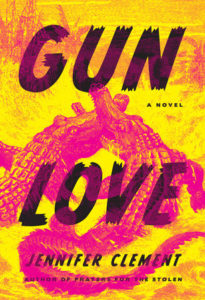 “Through a memorable coming-of-age story set in America’s margins, Clement makes all of these things true at once: A gun is a valentine, a secret-bearer, a penitent, a world destroyer, an exposed belly, an insurance policy, a sudden act of God … It might be tempting to read this novel merely as an exemplar of the neo-Southern grotesque — a lush, humid tale of rural hard-lucks made all the more strange by the incongruous beauty of Clement’s lyric prose — but Gun Love is neither swampy freak show nor poverty porn. Rather it’s a fable of modern American violence, and the resilience it takes to survive a childhood in its shadow.”

“In this accomplished and deftly plotted debut novel, Steavenson makes clear that her training in journalism has served, too, as an apprenticeship in fiction and its embellishments. Here, clinging to facts that are arresting enough in themselves, she distills the all-too-real convulsions of politicized religion that have brought terror to Paris and elsewhere. Yet to get at more lasting truths, she gives herself license to lie, to admit subjectivity, and the consequent freedoms of fiction seem as revelatory to Steavenson as they will to her readers.”

1. The Recovering by Leslie Jamison

“The Recovering is in its way a successful synthesis of [William] Styron’s and [Al] Alvarez’s masterpieces … Jamison’s greatest strength is her ability to show honestly the outrageous mental gymnastics every alcoholic masters in the attempt simultaneously to quit drinking and, above all, to continue drinking … Jamison’s descriptions of drinking are so well turned and evocative that those who have just quit drinking, who haven’t found their footing as nondrinkers yet, might find them triggering. But this too is a compliment.”

2. We the Corporations by Adam Winkler

“Wink­ler’s deeply engaging legal history, authoritative but accessible to non-lawyers, takes readers inside courtrooms, judges’ chambers and corporate offices as he reconstructs 200 years of case law. The book offers new takes on familiar stories … This meticulous, educational and thoroughly enjoyable retelling of our nation’s past leads to Winkler’s argument: Citizens United, however wrongly reasoned, was not an aberration in American law. Rather, it marked the culmination of a 200-year campaign, waged by well-funded corporate elites, to bend the law in their favor … We the Corporations leaves no doubt: America has been pro-corporate and elitist from the beginning.”

3. Stealing the Show: How Women Are Revolutionizing Television by Joy Press

“Between interviews with the showrunners themselves as well as the writers and actors they employ, and even a set visit to Jill Soloway’s seminal Amazon dramedy, Transparent, Press gives television lovers an inspiring, eye-opening look into the way women are creating groundbreaking, original content.”

“There are loads of good jokes and sharp observations. And if Scovell’s perspective is more Clintonesque Ivy League reformer than paradigm-questioning subversive (jokes about Facebook, which certainly presents a giant target, are conspicuous by their absence), she offers an honest, demystifying glimpse into the world of the men (and some women) behind the comedy curtain.”

“Basketball: Great Writing About America’s Game is like an all-star game between hard covers. It is also a volume that can be easily dipped into—the way Wilt Chamberlain used to dip into his free-throw shots, though the reader’s efforts will be better rewarded … The anthology makes it clear that basketball is often a sport played by people struggling for and eventually personifying (literally and otherwise) upward mobility. It is also a sport of fluid motion and rhythmic grace and thus, at times, poetical.”