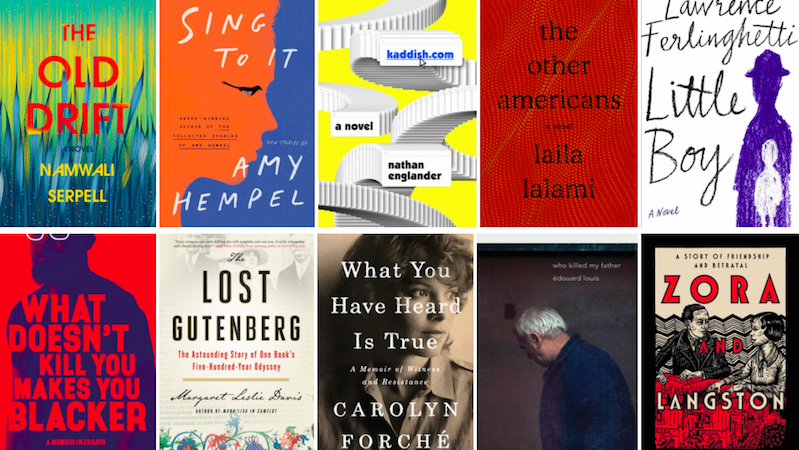 1. The Old Drift by Namwali Serpell

“Be prepared because this is a big book in all senses. Clocking in at a whomping 566 pages it sprawls over a century and overflows with staggering brilliance. In this wonderfully chaotic epic, Namwali Serpell invites us into an indelible world that’s part history, part sci-fi, totally political, and often as heartbreaking as it is weirdly hilarious … filled with as much riotous color and sound as an outdoor bazaar … Serpell unfolds in thrilling detail how the Africans fight back, win self-government, and replace the British flag for the Zambian one … The writing is gorgeous and fiercely attuned to magical realism.”

2. Sing to It: New Stories by Amy Hempel

“You can’t rush great fiction, and that’s exactly what Hempel delivers in her new collection, Sing to It. The fifteen stories in Hempel’s new book showcase the author’s immense talents, and prove that she’s one of the most vital authors of short fiction writing today … There’s not a story in Sing to It that’s less than brilliant, and the collection itself is even greater than the sum of its parts. Hempel occasionally draws comparisons to authors like Mary Robison and Joy Williams, but she writes like nobody else—she’s an irreplaceable literary treasure who has mastered the art of the short story more skillfully than just about any other writer out there. Sing to It is a quiet masterpiece by a true American original.”

Read a story from Sing to It here

“There’s nothing derivative about this clever novel, but its tragicomic treatment of death, guilt and Jewish orthodoxy surely pays homage to the late great [Philip Roth] … [the novel’s] first part serves as another reminder of Englander’s extraordinary skill as a short story writer … When the main part of the novel picks up 20 years later, Englander keeps pushing on [specific] issues with the same fertile wit and tender compassion … Larry’s fanatical devotion and his anxiety about fulfilling it might look ridiculous to those who don’t feel the vitality of tradition, but the humor of kaddish.com is infused with delight rather than mockery. What a rare blessing to find a smart and witty novel about the unexpected ways religious commitment can fracture a life—and restore it.”

4. The Other Americans by Laila Lalami

“The Other Americans is one of the most affecting novels I have read about race and immigration post-9/11. It is shot through with the hopes and humiliations of being a good immigrant, of people working hard to reconcile the cultures they grew up in with life in their adopted country … Lalami’s prose is smart and unsentimental. She is deft at conveying the strained, compromised nature of family relationships. If the structure of the story becomes a little schematic, it is compensated by fully realised characters, who are never reduced to vessels of our present conflicts. It’s a novel that reaches beyond its immediate setting to illuminate more universal themes of loss, alienation and betrayal. Subtle, wise and full of humanity, The Other Americans deserves a wide audience.”

Read an excerpt from The Other Americans here

“It’s at once a novel, a memoir, a poem, a monologue, a psalm, a rant, a scientific treatise, a political address, a last will and testament, a mostly punctuation-free stream of consciousness—a shout into the maw of oblivion, a definitive capstone to a long and storied literary life … if Little Boy is just a dream, then it’s one you can easily get lost in, and by the time you wake up, you won’t quite know what you did or where you went, but you’ll have felt as though you were able to touch another consciousness, if only for a brief moment, wandering one last time through the Coney Islands of an iconic poet’s mind.”

Check out a 100th birthday tribute to Lawrence Ferlinghetti here

1. What Doesn’t Kill You Makes You Blacker by Damon Young

“…a collection that serves as an authentic, keen, and touching example of the black male experience. Reading Young’s essays is often an uncomfortable experience because he doesn’t shy away from ugly truths. There is a lot of funny writing here, but also pain, insecurity, loss, and injustice … The beauty of What Doesn’t Kill You Makes You Blacker is that Young never tries to make it easy for readers … What Doesn’t Kill You Makes You Blacker is an outstanding collection of nonfiction that encapsulates the black male experience—and demands change.”

“It’s an addictive and engaging look at the ‘competitive, catty and slightly angst-ridden’ heart of the world of book collecting … The Lost Gutenberg reads like a comedy of manners starring the cast of an Ayn Rand novel … It’s improbable and riveting. You learn a lot about the world when you see what it takes to both make and own something as precious as a Gutenberg Bible … Davis has an extremely wry hand, often sliding in jokes so subtly you don’t even notice they’re there until you’re done laughing.”

Read an excerpt from The Lost Gutenberg here

3. What You Have Heard is True by Carolyn Forché

“In this galvanizing memoir, [Forché] recounts her political awakening under fire with a poet’s lyrical acuity and a storyteller’s drama … Forché recounts her frightening and transformative encounters with scorching specificity and portrays her brilliant and courageous mentor and other resistance fighters with wonder and gratitude. This clarion work of remembrance, this indelible testimony to a horrific battle in the unending struggle for human rights, justice, and peace, stands with the dispatches of Isabel Allende, Eduardo Galeano, Pablo Neruda, and Elena Poniatowska.”

4. Who Killed My Father by Édouard Louis

“Through a non-chronological series of memories—fragments of his childhood concerning his father—Louis takes aim at the self-defeating masculine ethos of the place where he grew up … With remarkable delicacy and understanding, Louis conveys the relationship between a father and a son whose love for each other is so fierce and so hard to assimilate to their experience of masculinity that it often can be mistaken for hatred. The careful, deliberate narrative reads as if Louis were testifying, or building a case for a jury in real time … Who Killed My Father reads like a hinge work between Louis’s early autobiographical fiction and the mature writing that is surely to come: perhaps a gilets jaunes Germinal for the 21st century.”

5. Zora and Langston: A Story of Friendship and Betrayal by Yuval Taylor

“Fascinating in their own rights as major literary figures, Langston Hughes and Zora Neale Hurston are also fascinating for their complicated relationship, which ended in a spectacular clash … Taylor has created an intimate portrait of two luminaries of American literature against a backdrop of the cultural, political, and economic forces that influenced them.”