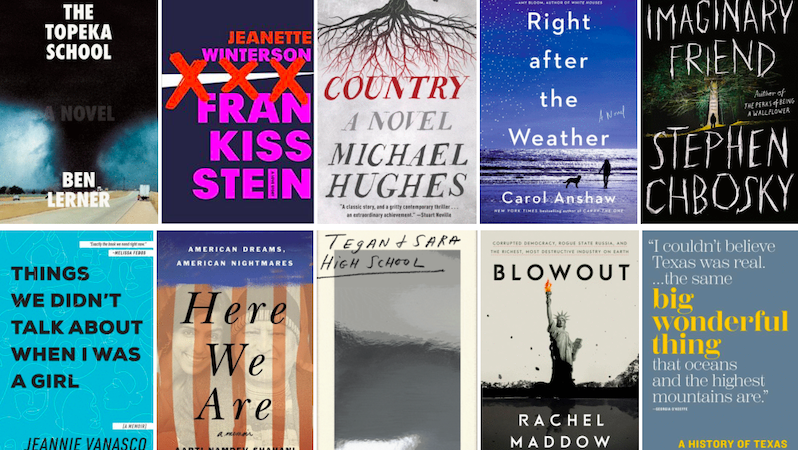 Ben Lerner’s The Topeka School, Jeanette Winterson’s Frankissstein, Stephen Chbosky’s Imaginary Friend, and Rachel Maddow’s Blowout are among the most critically-acclaimed books of the past seven days.

1. The Topeka School by Ben Lerner

“…thoroughly, intimidatingly brilliant and absolutely contemporary … funny, and at times, painfully acute. A bildungsroman in lyric chorus, it looks back on the past with affection but without nostalgia, and lands in the frighteningly unsure coda of the present day … manages, in its particularity, to tell a story that is emblematic of American life … Lerner seems to reinvent the novel as a happy side effect of some other project … He is a supremely gifted prose stylist, at once theoretical and conversational; he never bores or blathers, and is always limpid. Rather than inviting the reader to look at him or his life, he invites the reader to look through him … It is a testament to Lerner’s immense skill as a storyteller that his novels that double as essays and flicker like poems are also as frictionless as any classic work of nineteenth-century realism, easily reeling the reader in to their worlds, which display, in modernist style, all the seams … Lerner is a genius of self-consciousness in all its senses—the thinking mind, the ambivalent attachment, the awkward social performance.” 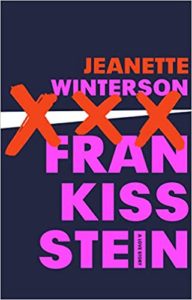 “Frankissstein is a fragmented, at times dazzlingly intelligent meditation on the responsibilities of creation, the possibilities of artificial intelligence and the implications of both transsexuality and transhumanism … Frankissstein abounds with invention … Such is Winterson’s comfort across modes and forms, she’s also able to leaven the hyperinvention of rogue science with deeply evocative historical realism balanced by hilarious, almost bawdy set pieces … this is a work of both pleasure and profundity, robustly and skilfully structured, and suffused with all Winterson’s usual preoccupations—gender, language, sexuality, the limits of individual liberty and the life of ideas.”

“The text drips with blood and invective. There is a fearsome capacity for violence. You think of Dante’s Ugolino latched on to the back of Ruggieri’s head, chewing at it like a dog … Hughes isn’t trying to pull off a literary stunt. It is as intellectual and comparative ballast that the crossover succeeds … The Homeric grants epic despair to the sequence of brutality in the recent past … The Illiad stripped of its lyricism carries an unfading relevance. Hughes’ perception is on the money. This is a hard, rigorous and necessary book which grinds out its beauty as the song cycles of empire and resistance fall silent, choked in their own blood.”

4. Right After the Weather by Carol Anshaw

“Anshaw’s compassionate novels are propelled by her preternatural gift for close observation, so it was a stroke of genius to create a hyper-attentive set-designer narrator. Not only does Cate take in every detail of every scene, she also has strong opinions about all that she surveys, making her inner monologue stingingly precise and often hilarious … With sharply drawn characters, an ensnaring plot, and a look back at closeted gay lives, Anshaw, acutely attuned to the shifting weather of emotions and relationships, insightfully dramatizes the insistence of desire over convention and expediency and the endless reverberations of violence.”

Read an excerpt from Right After the Weather here

“… an all-out, not-for-the-fainthearted horror novel, one of the most effective and ambitious of recent years. Who would have guessed? … To be sure, the underlying sensibility that characterized Wallflower is present in the new book, particularly in its empathetic portraits of people struggling to recover from personal tragedy. Beyond that, Imaginary Friend is a radical departure on virtually every level. Perhaps its most impressive aspect is the confidence with which Chbosky deploys the more fantastical elements of his complex narrative, using the baroque, hallucinatory imagery of horror fiction to tell a very human story with universal implications.”

1. Things We Didn’t Talk About When I Was a Girl by Jeannie Vanasco

“With deep self-consciousness, courage, and nuance, the author reveals the inner universe of her survivorship and interrogates the notion that rapists are two-dimensionally evil … her engrossing, complex, incisive testament to the banality of violence is not a desolate narrative. Instead, Vanasco invites her readers to understand the complicated humanity involved in both causing and experiencing harm, leaving the limits and possibilities of accountability and healing as urgent, open questions … An extraordinarily brave work of self- and cultural reflection.”

“… riveting … a bruising critique of colonialism … This story is heart-rending, but perhaps more compelling is Aarti’s struggle to understand her father … If you’re moved by frequent calls to deport so-called criminal or undocumented immigrants and refugees, please read Here We Are … contains multiple messages: the value of grit and hope and determination; the relentless work immigrant families undertake just to tread water; the fortitude and generosity of such families; and the gaping flaws in American justice. These messages risk going unheard, however, if readers fail to acknowledge that unless your ancestors arrived in chains or were indigenous, you, too, likely hail from immigrants who cut a few corners to survive.” 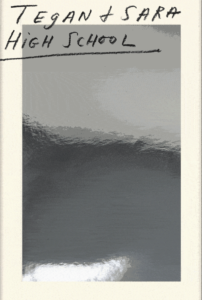 “… a lot like [Teagan and Sara’s] songs: complexly intimate, smartly crafted, and packing a subtle emotional wallop … The idea to cut the narrative off just before their career began to take off is refreshing in itself, allowing them to hone in on the kind of personal day-to-day detail most books of this kind seem to roll through merely as a means of setting up the biographical roots of an artist’s rock star myth … The depictions of aimless, vaguely dangerous, teenage partying (of which they did quite a lot) are especially well-rendered, like something out of a Hold Steady song … explosively detailed depictions of their earliest experiences trying to find girlfriends are worthy of an excellent YA novel, thanks to Tegan or Sara’s unsparingly real, matter-of-fact prose style … What emerges is a quietly heroic rock and roll origin story.”

“Maddow uses her knowledge, research, investigative skills, and snarky humor to complete this work about the global oil and gas industry … The complex connections among players, including the major oil companies, American politicians, Russian oil interests, and others are displayed clearly and consistently. Not altogether surprising, Maddow furthers her discussion of the oil and gas industry to expand on how and why Russia hacked the 2016 presidential election … All fans of Maddow, and even her detractors, will learn something new from this highly readable yet impressively detailed book. Anyone interested in the covert deals that change the nature of the global environmental and political landscape will devour. A must-have for all collections.”

5. Big Wonderful Thing: A History of Texas by Stephen Harrigan

“Harrigan, essentially, is to Texas literature what Willie Nelson is to Texas music … And his latest book might just be the one he was born to write. Big Wonderful Thing, a sprawling history of the Lone Star state, showcases Harrigan’s enthusiasm for Texas⁠—it’s an endlessly fascinating look at how the state has evolved over the years … It’s clear that he loves the state, but he’s refreshingly unwilling to perpetuate the mythology that’s built up around it—the truth, he seems to argue, is much more interesting than the apocryphal stories that have persisted for decades … Texas is an incredibly fascinating state—and Harrigan, who recognizes that the state’s diversity is what makes it great, truly does it justice. Endlessly readable and written with great care, Big Wonderful Thing is just that.”