Right After the Weather 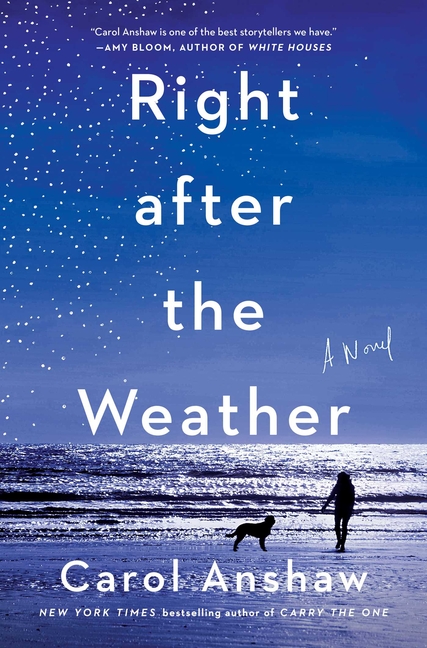 It’s the fall of 2016. Cate, a set designer in her early forties, lives and works in Chicago’s theater community. She has a firm plan to get solvent and settled in a serious relationship. Only a few blocks away, we find Nathan and Irene—casual sociopaths, drug addicts, and small-time criminals. Their world and Cate’s intersect the day she comes into her friend's kitchen to find these strangers assaulting her friend. From the author of the New York Times bestseller Carry the One.

What The Reviewers Say
Positive Leah Hager Cohen,
The New York Times Book Review
... does a very good — which is to say very uncomfortable — job of exploring the way our desire for connection and approval swims against the tide of our propensity to judge and feel judged by those who are close to us ... The novel takes place during the months leading up to and following the 2016 presidential election. Against this backdrop, what might otherwise have been a tale of petty strife and mildly amusing snark takes on deeper import. Wisely, Anshaw keeps the national politics mostly offstage, alluding to them just enough to lend a sense of proportion — not so much counterpoint as compass rose — to the fictional events she maps ... perhaps Anshaw means to shake us awake from our little narcissisms, our devout solipsisms, our daily applications of principled maquillage. Perhaps, in its curiously bleak way, the novel means to nudge us toward some much-needed muddying. I mightn’t have thought so if not for the last paragraph, which, like a sudden break in the weather, astonishes with the force of its unexpected beauty.
Read Full Review >>
Rave Sara Rauch,
Lamda Literary
... captures a world in midst of crisis ... Anshaw’s sentences are beautiful, and her characters are complex; the plot builds towards a slow climax, which then falls into a slow spin and a somewhat abrupt finale. Anshaw’s meticulous attention to the quiet, inevitable impact of the assault on Cate’s life and her friendship with Neale’s gives Right after the Weather its main drive. But despite her best intentions, Cate cannot alter the course that fate has set her on ... a sensuous and layered book. Though its pacing is subtle, Anshaw is a deft writer and her details are insightful, intelligent, astute, and subtly humorous. Cate—who may seem hapless to some—perhaps merely lacks the insight to see that the artistic, if sometimes aimless, course of her life is actually a beautiful meander. She remains true to herself, even when it looks ridiculous to those around her. In the final scene, a ripple of an epiphany blows through her—not enough to change her, but perhaps enough to allow her to see she’s doing just fine.
Read Full Review >>
Rave Donna Seaman,
Booklist
Anshaw’s compassionate novels are propelled by her preternatural gift for close observation, so it was a stroke of genius to create a hyper-attentive set-designer narrator. Not only does Cate take in every detail of every scene, she also has strong opinions about all that she surveys, making her inner monologue stingingly precise and often hilarious ... With sharply drawn characters, an ensnaring plot, and a look back at closeted gay lives, Anshaw, acutely attuned to the shifting weather of emotions and relationships, insightfully dramatizes the insistence of desire over convention and expediency and the endless reverberations of violence.
Read Full Review >>
See All Reviews >>
SIMILAR BOOKS
Fiction

Mother May I
Joshilyn Jackson
Rave
What did you think of Right After the Weather?
© LitHub | Privacy