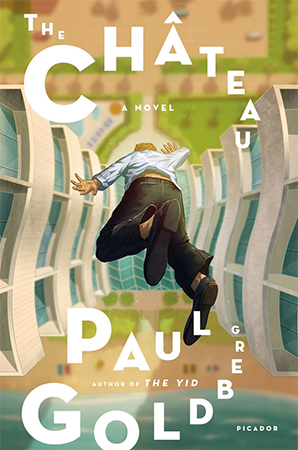 A dark, madcap satire from the author of The Did. Adrift and broke after losing his job at the Washington Post, William Katzenelenbogen descends into Trump-ian madness while visiting his estranged father in South Florida.

What The Reviewers Say
Rave Alexander Aciman,
Tablet
...a detective story that is as humorous as it is sinister ... The book treats the idea of a detective story with total irony, toppling it over onto itself—which is perhaps the greatest homage a writer can make these days to a particular form. The hallmarks of mystery fiction are teased out faithfully and yet so irreverently that the novel becomes a sort of anti-noir ... Even self-narration is done in the third person. Goldberg finds a way to give readers a deeply textured glimpse into Bill’s mind without ever speaking from it directly ... Goldberg’s style, on occasion, dips into a sort of lyrical fluidity detached from arcs and narratives and instead shows us a series of impulses and instincts and meanderings belonging to the brain and heart of his main character, all of which is so easily understood even if not entirely linear, as if he is writing something that is itself only intelligible to our gut—something that plays into the meanderings of our brains and hearts.
Read Full Review >>
Positive Michael Czobit,
The Toronto Globe and Mail
...a reading experience that's unmistakably set in Trump's America, which could make you want to stop reading, but you shouldn't. The Château isn't toxic. You won't choke. In the growing category of Trump novels, this entry will make you laugh ... Goldberg writes smooth prose even when he drops in Russian words, phrases and poetry, most of which add humour to the novel. If approval ratings dip on the story, the blame falls on the parts that are underdeveloped – the death of Bill's mother – or unnecessary (like Bill's not-quite ex-wife). The aspect most fully developed is Goldberg's humour, which floats in the same space as late-night TV. But whether you like the jokes depends on how you like your satire. Goldberg isn't merciless, but he's not Jimmy Fallon either. Thankfully.
Read Full Review >>
Rave Jason Sheehan,
NPR
...a fast-forward screed on our current historical moment, scattered and digressive and insane in the best possible way ... At moments, it is like Stanislaw Lem writing real estate copy for The Atlantic. At others, like Carl Hiaasen getting under the Florida blacktop and smelling the swamp beneath. And all through, it is bonkers — a careening voyage that feels like falling because never does it seem like Goldberg is completely in control of his own plot, pen or characters ... No book could be written about this moment in America that wasn't fractured; if one was, it would be a pack of lies. Or worse, propaganda. And Goldberg seems to know this. He finds truth in randomness and the unlikely outcome, character in who these people aren't as much as who they are.
Read Full Review >>
See All Reviews >>
SIMILAR BOOKS
Fiction

Milk Fed
Melissa Broder
Rave
What did you think of The Château?
© LitHub | Privacy