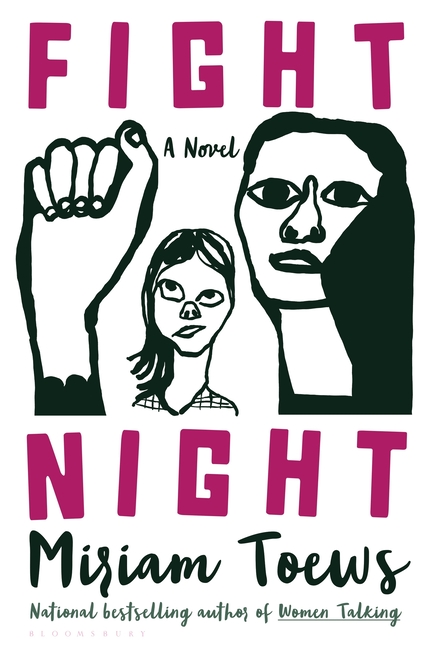 In the latest from the author of Women Talking, Swiv's Grandma, Elvira, has been fighting all her life with those who want to take away her joy, her independence and her spirit. Cramped together in their Toronto home, on the precipice of extraordinary change, Grandma and Swiv undertake a vital new project, setting out to explain their lives in letters they will never send.

What The Reviewers Say
Rave Bethanne Patrick,
The Boston Globe
Four females of different ages and stages will be in for the fight of their lives that night. If you suspect one will be retiring from life’s ring, that’s not a spoiler. Miriam Toews will make you cheer and sob for all concerned in her richly imagined Fight Night.
Read Full Review >>
Positive Nadja Spiegelman,
The New York Times Book Review
I’ve heard it theorized that every great artist circles her own central fire, a core trauma too bright and too hot to touch yet whose light is caught, refracted, in her works. Miriam Toews gets so close to the fire that the pages of her books may as well be singed ... She is the kind of writer for whom the act of writing is clearly more important than being read. Her books are an excavation, an attempt to give shape to her own pain, like a moth who longs to catch the candlelight in its wings ... Toews is a master of dialogue, and she swirls the adults’ perspectives through Swiv’s imperfect ventriloquism as if she were mixing paints ... The reader is pulled into the intimacy of a dysfunctional family whose unconditional love would make any truly dysfunctional family jealous ... This book lives so much further from the flame than some of Toews’s others that the sweet threatens to overpower the bitter, to edge toward the saccharine. The pregnant mother, the dying grandmother — the end is in sight from the beginning, and Toews doesn’t steer away from a climax that knots the bow too perfectly ... If the book’s overwhelming tenderness makes the reader cry, they’ll be, as Swiv’s mother teaches her, 'tears of happiness.'
Read Full Review >>
Rave Michael Magras,
BookPage
... brilliant ... she triumphs over a tough assignment: to write an entire novel in the voice of a child ... Toews gives Swiv a voice that is sophisticated, childlike and utterly believable ... The novel features a supporting cast of men that allows Toews to comment on examples of the patriarchy at work ... This material could have been strident, but the wonder of Fight Night is that it’s a warmhearted and inventive portrait of women who have learned to fight against adversity.
Read Full Review >>
See All Reviews >>
SIMILAR BOOKS
Fiction

Vladimir
Julia May Jonas
Rave
What did you think of Fight Night?
© LitHub | Privacy