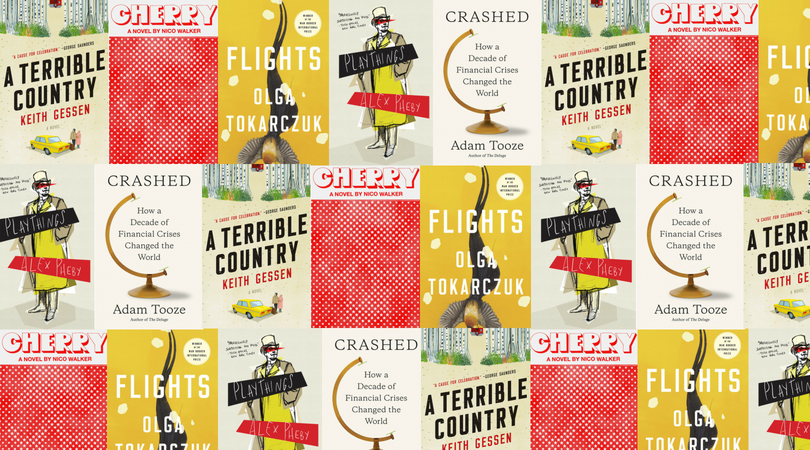 Crashed economies, minds unravelling, the trials and tribulations of the damned: just some of the cheery fare to be found among the finest literary criticism published this past week.

In his Guardian review of Crashed: How a Decade of Financial Crises Changed the World, bad boy Marxian economist and former Greek Finance Minister Yanis Varoufakis praises Adam Tooze’s “original insights into the nature of the wounded beast” of financialized capitalism. Over at the Washington Post, Ron Charles writes that incarcerated writer and Iraq War veteran Nico Walker’s semi-autobiographical debut novel, Cherry, “reads as if it’s been scratched out with a dirty needle across the tender skin of a man’s forearm.” Certain American States author Catherine Lacey was fascinated by Alex Pheby’s Playthings, remarking in her New York Times review that the book occupies “an eerie place between a lived account of insanity and a careful observation of a mind’s unraveling.” We’ve also got Boris Fishman on his fellow Soviet-born American writer Keith Gessen’s latest novel, A Terrible Country, and Zoë Hu on Olga Tokarczuk’s Man Booker International Prize-winning Flights.

“In a city where you can get pistol-whipped because there’s a guy with a pistol who feels like it, where more powerful men feel free to take your property because they’re more powerful and where darker-skinned men have their businesses set on fire, Andrei manages to look after his increasingly frail grandmother, find a week’s worth of hockey games with people who very slowly—but very firmly—become friends, and join a community of well-meaning young communists…In this section, Gessen’s book feels like one of recent literature’s most accurate portrayals of modern Russia, which is to say I was miserable for hours after reading it. But moved, too, for Andrei also sees the magic of the place … Gessen evokes not only convincingly, but indispensably, something exceedingly rare in modern American fiction: genuine male vulnerability. There’s enough heart here to redeem every recent male novel that’s aimed for it and found solipsism instead.”

“Every very so often, humanity manages genuinely to surprise itself. Events to which we had previously assigned zero probability push us into what the ancient Greeks referred to as aporia: intense bafflement urgently demanding a new model of the world we live in. The financial crash of 2008 was such a moment … Moments of aporia produce collective efforts to respond to our bewilderment. In the late 18th century, the pains of the Industrial Revolution begat free-market economics. The crisis of 1848 brought us the Marxist tradition. The great depression produced both Keynes’s General Theory and Friedman’s monetarism. Over the past decade, the 2008 crash has given rise to a cottage industry of books, articles, documentaries, even films but not, so far, an overarching theory. Now, a compelling new book has arrived which deserves to be at the top of the reading list of anyone interested in the events of 2008 and eager to make sense of the aftermath … Crashed combines simple explanations of complex financial concepts with a majestic narrative tracing the prehistory and destructive path of the crisis across the planet (including long, apt and erudite chapters on Russia, the former Soviet satellites, China and south-east Asia). It also offers original insights into the nature of the wounded beast (financialized capitalism).”

“Tokarczuk’s approach is precise: every detail, from flight times to the labels on travel toiletries, is accounted for … Each narrative is preserved in the separate bell-jar of an individual journey, and yet the book’s toggling between centuries never feels jarring. Tokarczuk’s dry prose works to bind these fragments together, pervading the book like a quiet, unobtrusive hum … Travel writing usually presents a linear narrative—asdepartures and returns easily correspond with beginnings and endings. But Tokarczuk complicates this. Her characters, like the book’s episodic structure, resist neat demarcations … As I neared the end of Flights, I realized I had stopped searching for a moral in each of these stories. The book is like a map: including disparate parts not because they cause or connect to each other, but because their contours help clarify a wider, impersonal whole. In this way, Tokarczuk shows that even the loneliest traveler fits into a bigger scheme.”

“Cherry is a miracle of literary serendipity, a triumph born of gore and suffering that reads as if it’s been scratched out with a dirty needle across the tender skin of a man’s forearm … Walker credits Tim O’Connell, his editor at Knopf, with transforming those typewritten pages into this tour de force. But when I contacted O’Connell, he claimed … ‘Nico simply poured everything he had into it.’ That sounds right—and true to the searing authenticity of this novel, which tries to answer the question, ‘How do you get to be a scumbag?’ But in the process of laying out the road to perdition, Walker demonstrates the depths of his humanity and challenges us to bridge the distance that we imagine separates us from the damned.”

“A close third-person voice situates Playthings in an eerie place between a lived account of insanity and a careful observation of a mind’s unraveling … In the fiction of Schreber’s madness, every person is, as he puts it, a ‘plaything of the Lower God.’ In the reality that Schreber lived, the mentally ill were playthings of the ‘well,’ children were playthings of adults, and minorities were playthings of the state. It is this economy of cruelty—not repressed homosexuality, as Freud suggested in an essay on Schreber’s memoir—that is the seed of Schreber’s suffering. Pheby illustrates this point with compassion and subtlety in Playthings; the book’s hybrid position between the historical and the fictional makes it all the more potent.”