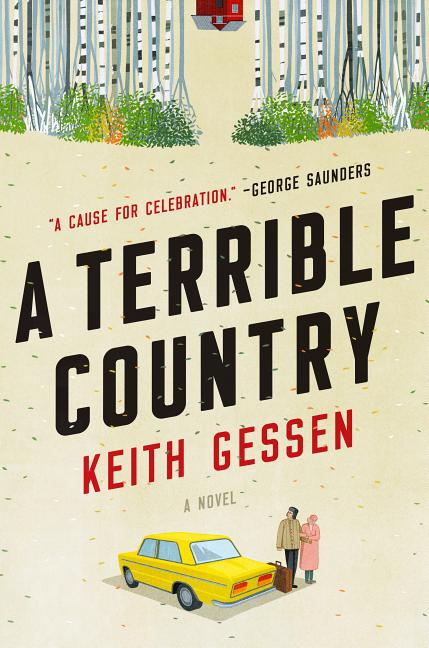 A Terrible Country is the first novel in ten years from n+1 founding editor Keith Gessen. Faced with dismal academic job prospects and a withering personal life, Andrei leaves New York to spend the summer in Moscow to care for his elderly grandmother (and to collect her tales of Stalinist Russia—a research topic that might finally get him a job).

What The Reviewers Say
Rave Marcel Theroux,
The Guardian
Keith Gessen’s second novel is a very funny, perceptive, exasperated, loving and timely portrait of a country that its author clearly knows well ... Andrei relates the comic indignities of his new life with winning, informal candour. His fluent Russian and obligations to his grandmother draw him into corners of the vast city that outsiders never penetrate. He plays ice hockey matches in Moscow’s interminable suburbs, tries to get a date, is forced to rely on the fragmenting healthcare system, and meets young, broke Russians making their lives in a ruthless city that worships wealth and power. He surprises himself by disliking the well-off Russian liberals he meets at their informal headquarters, the cafe Jean-Jacques ... The refreshingly artless writing belies a deep understanding of Russia, its history and literature. Andrei digresses enlighteningly on Russian as a literary language, swearing, taxis, plumbing, ice hockey and the role played by global oil prices in the breakup of the Soviet Union ... A Terrible Country captures a moment when high oil prices, economic confidence and a strong rouble made Moscow appear even more intimidating than usual to outsiders.
Read Full Review >>
Positive Dwight Garner,
The New York Times
Keith Gessen’s A Terrible Country feels small and tentative in its opening pages ... Gessen is a writer of spare sentences; he’s more of a Chekhov than a Nabokov. There’s little thunder, no off-piste mental excursions, no sense of a writer stropping his razor. His sort of plain writing is difficult to pull off. There is a fine line between elegant simplicity and mere meagerness. As this novel pushes forward, however, Gessen’s patience, his ability to husband his resources, begins to pay off. He introduces character after character—goalies and oilmen and comely academics, the heartbroken, the disinherited and the excluded—each of whom blooms in the mind. Which is another way of saying that this earnest and wistful but serious book gets good, and then it gets very good. Gessen finds an emotional tone for his material. He writes incisively about many things here but especially about, as the old saw has it, how it is easier to fight for your principles than live up to them ... This artful and autumnal novel, published in high summer, is a gift for those who wish to receive it.
Read Full Review >>
Positive Boris Fishman,
The New York Times Book Review
When Andrei does tell us something we didn’t know, sometimes it’s hard to feel that we need to ... Andrei offers plenty of self-deprecation, but we aren’t given much reason to assume this is parody ... As Andrei settles down [into life in Russia], however, his story not only improves but gains significant distinction and shape. We get incisive observations about the country ... as well as instances of good writing, period ... There’s also a laser-true and very funny set piece about Russian men and their dexterity at turning sexual profanities into verbs ... In this section, Gessen’s book feels like one of recent literature’s most accurate portrayals of modern Russia, which is to say I was miserable for hours after reading it. But moved, too, for Andrei also sees the magic of the place ... The openhearted charm that takes over the story here — the marvel and heartbreak of someone who can’t quite believe he’s so attached to a place that can be so dehumanizing and abusive — makes you forget every redundancy and frivolity of the early going ... There’s enough heart here to redeem every recent male novel that’s aimed for it and found solipsism instead ... I don’t know if A Terrible Country is good fiction, but you won’t read a more observant book about the country that has now been America’s bedeviling foil for almost a century.
Read Full Review >>
See All Reviews >>
SIMILAR BOOKS
Fiction

Atomic Anna
Rachel Barenbaum
Rave
What did you think of A Terrible Country?
© LitHub | Privacy