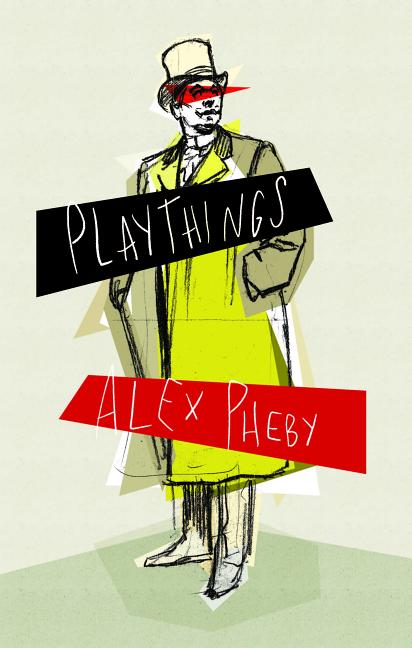 What The Reviewers Say
Rave Thomas Storey,
Full Stop
Pheby’s novel takes Schreber’s breakdown as its starting point, and uses his story to powerfully depict the radical disjunctions of a schizophrenic mind descending into insanity, offering a complex multi-layered account of madness which shatters linear conceptions of time and perspective. In so doing it harkens back to a modernist obsession with mental well-being which went hand in hand with radical literary experiments in form and perspective. Playthings is however not a cold, clinical work, nor is it an unceasingly harrowing read, despite some moments of psychological horror; it is imbued with a dark but humorous sense of the absurd ... This vertiginous shift in perception is one of the joys of this shape shifting novel, as it perpetually plays with the reader’s scope of insight, first widening, then narrowing, until we are never sure where we sit. This is both a pleasure and a challenge, as the reader is quite appropriately the writer’s plaything ... Pheby’s primary accomplishment is to depict a man wrestling with his demons without ever explicitly expressing that struggle, leaving it to the reader to connect the dots between trauma, insanity, guilt and perception. Thus he embodies Schreber’s own repression in the fractured form of his novel, showing that we can never know what is lurking beneath the surface of apparent normality.
Read Full Review >>
Positive Catherine Lacey,
The New York Times Book Review
Agile and wily, Pheby’s sentences flit in the weather of Schreber’s sanity, yet they are always buoyed by the judge’s half-hampered intellect and rationality. It’s the most torturous variety of mental illness—one that almost understands itself ... In the reality that Schreber lived, the mentally ill were playthings of the 'well,' children were playthings of adults, and minorities were playthings of the state. It is this economy of cruelty—not repressed homosexuality, as Freud suggested in an essay on Schreber’s memoir—that is the seed of Schreber’s suffering. Pheby illustrates this point with compassion and subtlety in Playthings; the book’s hybrid position between the historical and the fictional makes it all the more potent.
Read Full Review >>
Positive Chris Power,
The Guardian
Alex Pheby puts us disturbingly close to this troubled individual, but pointedly opts for third person instead of first: throughout this compelling novel the space between reader and Schreber becomes a sombre reminder of how alone we all are ... Pheby’s writing is elegant and straightforward, but the discontinuous structure of the book is not, and the clarity of the prose can be deceptive: certain characters and events presented as real turn out not to be; others we are left to wonder about ... Fittingly for a book about a psychoanalytical subject, Playthings is swollen with buried truths ... Every action, every situation, is influenced by what lies beneath it.
Read Full Review >>
See All Reviews >>
SIMILAR BOOKS
Fiction

Theatre of Marvels
Lianne Dillsworth
Positive
What did you think of Playthings?
© LitHub | Privacy