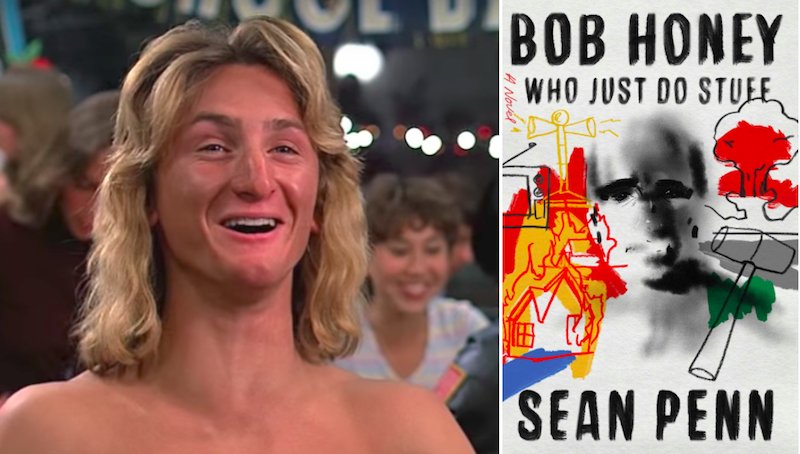 “Is it needlessly cynical to read a pompous celebrity’s very bad novel purely in order to dunk on it? Yes. But the true joke is on me, because it’s physically impossible to dunk on a novel that is already dunking on itself so hard. Bob Honey is an exercise in ass-showing, a 160-page self-own … Nothing hangs together. Often when critics compare a novel to a ‘fever dream,’ they mean it as a compliment, conveying that the book creates its own otherworldly universe and dream logic. When I say that Bob Honeyis reminiscent of a fever dream, I mean that it’s nonsensical, unpleasant and left me sweaty with mingled horror and confusion … Scattered throughout is the sort of gleeful racism and misogyny that qualifies Penn’s work as ‘darkly comic’ … It’s not often that you read a literary novel about which the most flattering adjective you might use is ‘derivative,’ but such is the case here … This is all, apparently, supposed to seem deeply witty and profound. Instead, it’s akin to the product of a postmodern literature bot. It doesn’t seem quite possible that a human person wrote this mess.”

“No one sounds like Lispector — in English or Portuguese. No one thinks like her. Not only does she seem endowed with more senses than the allotted five, she bends syntax and punctuation to her will. She turns the dictionary upside down, shaking all the words loose from their definitions, sprinkling them back in as she desires (along with a few eyelashes, toast crumbs and dead flies) — and doesn’t the language look better for it? … But The Chandelier is uniquely demanding — it’s baggy, claggy and contentedly glacial. We get interior monologues and barometric readings of the drifting mood of a young, unhappy woman named Virginia. Paragraph breaks are few; chapter breaks are nonexistent … If the pages of The Chandelier are so thickly lacquered with description, streams of adjectives and looping repetition, it’s because Lispector is flexing, coming into her power. She’s playing, she’s practicing. These pages are full of finger exercises, arpeggios of thought and perception … The Chandelier might best be understood as a bridge in Lispector’s work. But even so, it conveys a special charge, an undeniable quantity of genius.”

“…like a good tennis match, the salvos grow more intense. Lucy is a chameleon who makes Patricia Highsmith’s Tom Ripley look talentless when it comes to reinvention. She’s a force to be reckoned with. Alice, it would seem on the surface, is going to be easy prey. But as emotionally frail as she is, she still rallies just enough to keep the match close and gives us hope for an upset … Occasionally, the story’s momentum is slowed by Mangan’s enthusiastic attempts to turn the novel into a threesome, with Tangier as its third character … Moreover, sometimes the two women sound so similar that they are difficult to distinguish … Still, these are small distractions. The lying, the cunning, and the duplicity are so very mannered that it’s chilling. Rich in dread, the foreboding positively drips from every page of this one.”

“It feels weirdly coy, right now, reading a novel concerned with contemporary women’s issues whose real-world reference points are draped in a perfunctory veil of fictionality…For a book that strives to capture an era in which feminism became a dependable pop-culture brand, The Female Persuasion offers a sparsely populated cultural landscape … Wolitzer’s tin ear for pop culture comes to feel like an author’s inability to either authoritatively capture the things of her world as they exist or else invent a world compelling on its own terms … The youth are out there naming names, demanding change, maintaining a briny sense of humor. Meanwhile, at the end of The Female Persuasion, thirty-one-year-old Greer has something strongly resembling ‘it all’: a baby, a best seller, and a brownstone. It’s a happy ending, fantastical and very old-fashioned.”

“What makes Ortberg’s everyday horrors truly different is that they map questions onto these old stories instead of answers … Every story in The Merry Spinster is told with a whimsy and a lightness of touch that makes their painful questions, and still more painful non-answers, palatable. Having finished the book, I’m convinced there’s no better way to discuss non-truths than through a host of genres—fairy tales, prayers, what have you—that are known for being stodgily moral and unambiguous … The Merry Spinster is an unnerving book, a familiar one, and a delightful one. It changes and transforms stories that we may hold dear. That convergence of contradictions is very much what makes it great.”