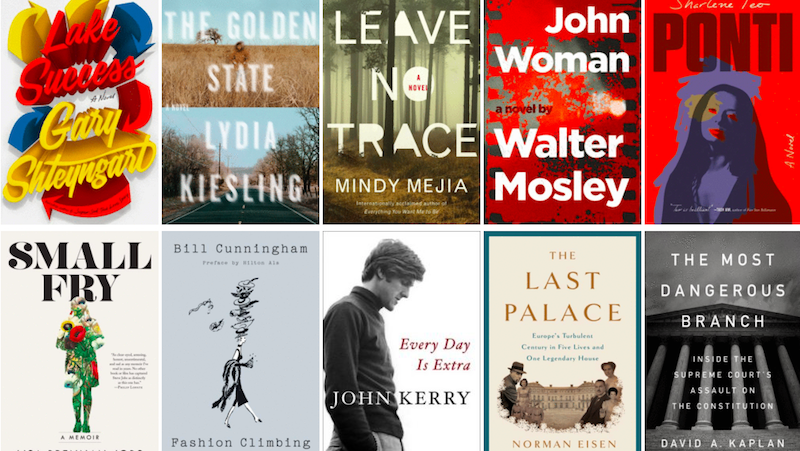 “Adjust your expectations when you pick up Gary Shteyngart’s Lake Success. His new book is not insanely funny nor hilariously absurd. It’s better than that. A mature blending of the author’s signature wit and melancholy, Lake Success feels timely but not fleeting … There’s something uncanny about Shteyngart’s ability to inhabit this man’s boundless confidence, his neediness, his juvenile tendency to fall in love and imagine everyone as a life-changing friend … comedy and pathos are exquisitely balanced.”

2. The Golden State by Lydia Kiesling

“The Golden State bears some resemblance to a flaneur novel. But if it is a flaneur novel, it represents a step forward for the genre. The roving male protagonist who observes the world around him from a position of detachment has been replaced by a narrator who combines an abstract intellectual interest in politics and class and national identity with insights into her own relationships and emotional life.”

3. Leave No Trace by Mindy Mejia

“…[an] evocative new thriller … This psychological thriller is a triumph on two fronts: its evocative northern Minnesota setting, and the forthright voice of Maya Stark, its narrator … Along with the breathtaking descriptions of the Boundary Waters…Mejia also evokes Duluth, its people and the ‘absolute reign of Superior’ with humility and humor … Maya is such a refreshing change from the trend of unreliable ‘girls’ in current thrillers.”

“…to start a Walter Mosley novel is like sitting down to a feast … Lucia Napoli-Jones is such a vivid, vibrant presence in John Woman… she is easily Mosley’s best secondary character since Mouse Alexander … As usual, Mosley’s superpower lies in his slantwise take on the world and his characters, of whom there are dozens, and every one is memorable, even if they speak only a line or two … this fantastic, surprising, humane and somewhat perverse book is one of Mosley’s best.”

“In her debut novel, Teo artfully collects various stories and rolls them into one seamless narrative. It is at once a subtle critique of the pressures of living in a modern Asian metropolis; a record of the swiftness and ruthlessness with which south-east Asia has changed over the last three decades; a portrait of the old juxtaposed with the new (and an accompanying dialogue between nostalgia and cynicism); an exploration of the relationship between women against the backdrop of social change; and, occasionally a love story—all wrapped up in the guise of a teenage coming-of-age novel.”

“The opening paragraphs of Fashion Climbing land like a sharp slap … What’s inspiring about Cunningham’s story is that he survived and thrived on hard work, unbridled creativity and self-expression despite disapproval from family, some in the fashion establishment and even some customers bewildered by some of his more whimsical and outlandish designs … this book deftly and vividly captures why so many wanted to celebrate him and why he is still remembered today.” 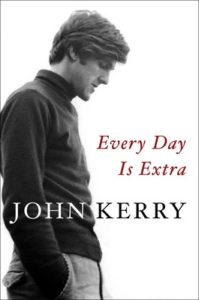 3. Every Day is Extra by John Kerry

“…there is much to commend Kerry’s memoir … Kerry shows remarkable honesty, depth, even spirituality … There are, moreover, charming moments, especially his recollections of the old Senate, with drinks always on offer, cigar smoke in the cloakroom air, raw stories on his baronial colleagues’ lips, even—hard to believe today—moderates in the Republican Party. The only thing that doesn’t ring quite true are the repeated accounts of his chummy relationship with Senator Edward M. Kennedy … Still, Kerry displays remarkable honesty. He speaks with refreshing forthrightness about faith and friendships, including his with Senator John McCain, the former Hanoi Hilton prisoner of war: ‘What John didn’t and couldn’t know then was how difficult the journey to being against the war was for so many of us,’ he wrote.”

4. The Last Palace by Norman Eisen

“In this engrossing tale by Eisen, former U.S. ambassador to the Czech Republic, the changes of 20th-century Europe are illuminated by the stories of one historic Prague building … Together their [the building’s owners] stories illuminate the ebb and flow of totalitarianism, painting a picture both hopeful and disheartening. This action-packed yet lyrically written page-turner confers a fascinating human understanding of Europe’s past and present.”

5. The Most Dangerous Branch by David A. Kaplan

“His book is a perfect primer for helping Americans understand how members of the court came to justify their excessive involvement in various controversial issues … He finds ample hypocrisy on the left and right alike, ripping what he describes as the squishy arguments of Harry Blackmun, who wrote the majority opinion in Roe determining access to abortion as a right, and Antonin Scalia … Both accessible and thorough, The Most Dangerous Branch is an important and fascinating look at the Court during one of its most important, and divisive, eras.”