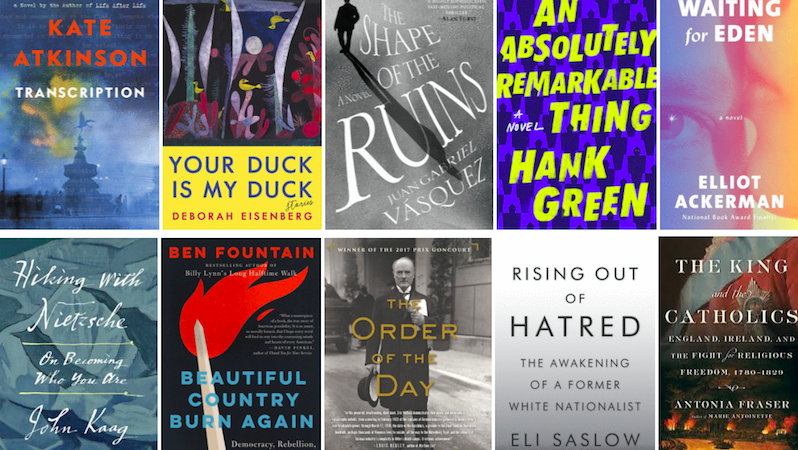 “Within a deceptively familiar form, Transcription treats the lives and labor of women with fresh complexity … Atkinson has predicated her enormously successful career upon giving readers intelligent and artful iterations of what they already know they like … In her best work—a category in which her latest, Transcription, certainly belongs—she maneuvers the tropes of the murder-mystery genre, of historical fiction, and of privileged white Britishness into a kind of critical salvage of women’s work, women’s lives, that’s as heterodox, in its way, as Cusk’s … before you know it Transcription has turned from a wartime spy yarn into a fuguelike meditation on the fungibility of female identity…Far from interfering with the plot of Transcription, this meditation on identity kindles it.”

2. Your Duck is My Duck by Deborah Eisenberg

“[Eisenberg] is always worth the wait. The new book is cannily constructed, and so instantly absorbing that it feels like an abduction … On the face of it, Your Duck Is My Duck could be regarded as a politically mild book for Eisenberg. The world intrudes only at the margins—tumult is hinted at in unnamed countries, glimpses of unspecified migrants. But these are stories of painful awakenings and refusals of innocence. This book offers no palliatives to its characters or to its readers—no plan of action. But it is a compass.”

3. The Shape of the Ruins by Juan Gabriel Vasquez

“…[a] clever, labyrinthine, thoroughly enjoyable historical novel … Ironic one moment, earnest the next, Vásquez presents himself as the central character of his own book. We learn about his career as a novelist, the state of his marriage, the birth of his daughters; we learn to be uncertain about what is fiction and what is not, what’s history and what’s debatable … Even at their most grotesque or bloodstained or slyly comic, these anecdotes and observations retain their humanity. Vásquez assembles them into a discursive, mischievous autofiction, combining forensic medicine with hearsay, revealing a third-hand source behind a first-hand account, setting public memory against private, chatter against documentation, until The Shape of the Ruins is less an album of stickers than a comprehensive critique of conspiracy aesthetics.”

“Green is clearly interested in how social media moves the needle on our culture, and he uses April’s fame, choices, and moral quandaries to reflect on the rending of social fabric. Fortunately, this entertaining ride isn’t over yet, as a cliffhanger ending makes clear. A fun, contemporary adventure that cares about who we are as humans, especially when faced with remarkable events.”

5. Waiting for Eden by Elliot Ackerman

“…[a] gorgeously constructed short novel … Both Eden’s and Mary’s fears and foibles are richly explored to create a deeply moving portrayal of how grief can begin even while our loved ones still cling to life. In this unique Afghanistan and Iraq Wars novel, which joins a growing genre that includes Kevin Powers’ Yellow Birds​ (2012) and Phil Klay’s Redeployment (2014), Ackerman’s focus on a single family makes the costs of war heartbreakingly clear, as does his drawing emotion and import from the smallest of acts with incredible skill. Many will read this wonderful novel in a single sitting.”

Elliot Ackerman on Five Books That Straddle Life and Death 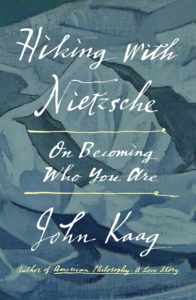 1. Hiking With Nietzsche by John Kaag

“As in American Philosophy, Kaag deftly intertwines sympathetic biography, accessible philosophical analysis, and self-critical autobiography … [Kaag’s] book takes us on a hike through Nietzsche’s manically prolific output, which occasionally feels like a forced march but more often feels like an invigorating excursion. Scrambling up treacherous rocky inclines in worn sneakers, Kaag reflects on the peaks and valleys of Nietzsche’s life and philosophy … Kaag extracts plenty of relevant ideas from Nietzsche and his followers in this stimulating book about combating despair and complacency with searching reflection.”

Read an excerpt from Hiking With Nietzsche here

“…an openhearted patriotic spirit of fellowship with his countrymen and a mounting sense of distress that Americans have always been but are now especially vulnerable to fraudulent appeals to their ugliest instincts. Most of his excursions on the road and through the past yield a tableau mixing the venal and the humane. But understanding requires an index of national villains … Sketching the history of racial politics since World War II and the GOP’s Southern Strategy, Fountain paints Trump as the second coming of Barry Goldwater … The strongest and most damning section of Beautiful Country Burn Again is the part that’s been most heavily revised in the election’s aftermath: a history of Hillary Clinton’s career … painting her as the tool of ‘a morally bankrupt system that she’d played a large and active role in creating … Nihilism’s a blast for people who’ve been lied to all their lives.’ ”

3. The Order of the Day by Éric Vuillard

“Éric Vuillard’s The Order of the Day covers this moment in Austrian history, and reveals it as more than just an Austrian moment. Buried in this event are all the elements which led to the spread of fascism in Europe: greed, ambition, obsequiousness. The elitism and greed of corporate capitalists, eager to hedge all their bets and finance any rising star, however odious; the servile deference of public figures who preferred to follow the rising (Nazi) political stars rather than confront them in the name of decency, integrity or democracy; the fawning and genteel ignorance of Western governments, who didn’t know how to respond to the brutish idiocy of Hitler and the opportunistic goons he surrounded himself with … It’s short, scathing, and the highly stylized literary narrative achieves near-poetic heights of form. Still, it’s well-researched and defiantly concrete as well.”

4. Rising Out of Hatred by Eli Saslow

“It may be the exception that proves the rule in these partisan times, but the transformational tale of Derek Black is powerful and riveting all the same … Eli Saslow, a Pulitzer Prize-winning journalist at The Washington Post, has written an eye-opening account of one man’s ideological metamorphosis. Rising out of Hatred: The Awakening of a Former White Nationalist is at once disturbing and uplifting.” 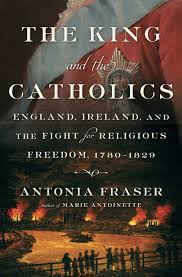 5. The King and the Catholics by Antonia Fraser

“Antonia Fraser’s last history book was about the ‘perilous question’ of parliamentary reform in 1832. The King and the Catholics takes on the ‘abominable question’ of Catholic emancipation three years earlier. It is also, Fraser writes, ‘in one sense, the sequel’ to her seminal study of the gunpowder plot. It deals with religious intolerance, xenophobia, rising populism, ‘a people strangely fond of royalty’ (Lord Holland’s observation), and a seemingly intractable Irish problem. It was the great issue of the day, ‘mixed up with everything’, one bishop noted, that ‘we eat or drink or see or think’ … Fraser, a convert to Catholicism, as well as a descendant of the Anglo-Irish Protestant Longfords, tells the story with erudition, sprezzatura and a tremendous sense of fun. Every page is shot through with humour and humanity.”